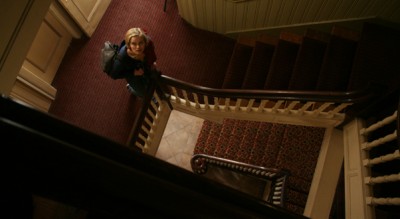 In an early scene of Ti West's The Innkeepers, Luke (Pat Healy) shows his co-worker Claire (Sara Paxton), an honest-to-goodness, real video clip of a ghost. He loads up the Quicktime movie on his laptop--a grainy, night-vision shot of a rocking chair in what looks like an attic. "Watch close," he tells her. "I missed it the first time." West's camera goes in for a close-up on the screen, which holds still, and still, and still. Nothing happens. Our eyes dart around the screen; the bracing anticipation at the beginning of the clip has unraveled. And then a giant, terrifying face fills the screen, accompanied by a pounding music hit. We jump, and then we laugh. It's fun to be scared.

That little moment is an encapsulation of West's modus operandi--less the scare, even, which is a satisfying one, but the waiting. In this film and his previous one, the magnificent '80s-babysitter-movie homage The House of the Devil, West has proven himself the master of the cinematic slow boil. He is patently disinterested in delivering a kill or "gag" every seven minutes, like a Friday the 13th or Saw movie. Like Rosemary's Baby or the original Halloween or The Shining--which The Innkeepers bears a more-than-passing resemblance to--he values the tense build (with an occasional jolt), culminating in a climax of unbearable terror. Whether it is a sustainable style or a Shyamalan-like gimmick remains to be seen. But as tricks go, it's a good one.

The setting is the Yankee Pedlar Inn, a rustic spot in Connecticut that is shutting its doors after more than a century. The guests just aren't showing up anymore, and for the last weekend, there's only a couple, so desk clerks Claire and Luke are the only ones on duty. Aimless twentysomethings, they've become obsessed with the hotel's most famous guest: Madeline O'Malley, who hung herself in the hotel's honeymoon suite after her fiancée stood her up. Claire and Luke are convinced that she still haunts the hotel, and decide to spend the weekend recording the various bangs and noises that they think she's creating. They've created a website to post them on, of course.

The film is organized into chapters, and the early ones are all about preparing the scene; characters are introduced, stories are told, details are studied. A couple of secondary characters wander the periphery--a welcome Kelly McGillis as one of the few guests, Lena Dunham (from Tiny Furniture) in a quickie cameo as "that annoying girl" from the nearby coffee shop--but it's mostly a two-hander (three, if you count the ghost). Some of their dialogue (particularly Luke's) is a little clunky, but West mostly has a good ear for how these people talk (he gets, for example, the specific way that young women use "super"--i.e., "super-famous" or "super-romantic").

In her look, to say nothing of her pluck and charm, Paxton resembles a young Reese Witherspoon (very young--she appears to be about 14 years old). Her acting can veer towards a broadly indicative style, but her director usually pulls her back, and she has some good bits; there's a moment of well-executed physical comedy with a leaky trash bag and a top-loading dumpster. She scares well too--when, at a key moment, she says "Holy shit," there's no doubt she means it. Healy's role is a bit old hat, but he invests it with a bit of dimension, and his line readings are sharp.

West is a leisurely storyteller, but not a slack one; our interest never flags, thanks in equal part to the deftness of his filmmaking and the giggliness of the early scares (he's got the wit of a young DePalma). He's building tension throughout the picture, particularly in the scenes of our heroine earnestly recording the things that go bump in the night, and trying to keep her wits about her. The sound design is superb, not just in the obvious elements (like the eerie foley work or the whirring strings of Jeff Grace's excellent score) but the little touches (I like how what we hear is determined by the noise-reducing headphones).

The Innkeepers is not all winks and nudges--when the time comes for West to deliver, he does. (Boy does he.) From Claire's return to the third floor onward, the picture is genuinely terrifying, and the austerity of West's style goes out the window in a flurry of Dutch angles, scare zooms, and Kubrickian tracking shots. But he never loses control--this is a disciplined and skillful filmmaker. His new film doesn't quite match the dizzying heights of House of the Devil; we're never quite as attached to its heroine, and the sheer gut-punch of that film's climax isn't approached. But it confirms that West is an exciting yet admirably restrained genre filmmaker, and his haunted-hotel movie is a classy, scary treat.