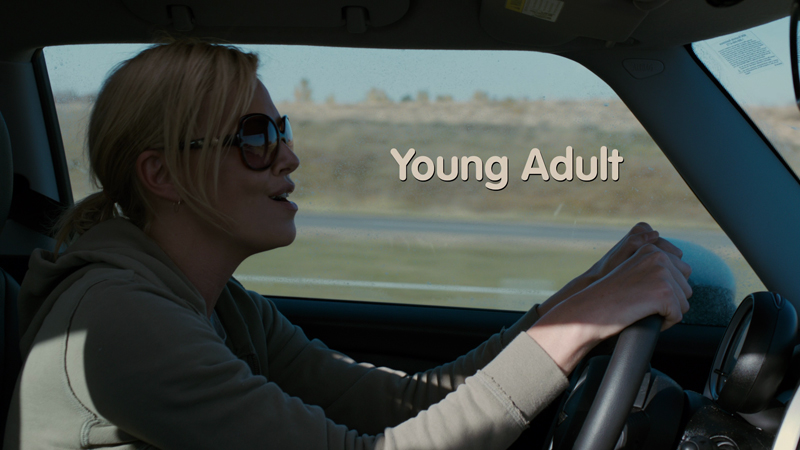 
The Movie
After watching Young Adult, it was hard to remember exactly how it was original sold to theater-goers, so I went back to watch the trailer (which is not included on this disc.) The memory came back, as the trailer positions the film as a bit of a wacky comedy from Juno-writer Diablo Cody, with an out-of-control drinker chasing after a married man. Though that last part about the out-of-control drinker and the married man is mostly spot-on, the rest of it couldn't be more wrong, starting with the idea that it's a comedy.

There are certainly funny moments to be found in the story of Mavis Gary (Charlize Theron), a ghost writer of Young Adult fiction facing the imminent end of her once-popular teen series, when she receives word that Buddy (Patrick Wilson,) her ex-high school sweetheart, has become the father of a new baby girl, via an invitation to the child's baby naming ceremony. Obsessed with this, and depressed over her own life, she returns to the small Minnesota town she escaped years ago, setting out to win back her former boyfriend, not caring for a minute that it would mean breaking up his marriage.

The problem is, before she finds Buddy, she runs into a phantom from the past in the form of Matt (Patton Oswalt,) an anonymous schoolmate who didn't have the great high-school experience Mavis had. And seeing what she has planned for Buddy, he takes on the previous unfilled position of her conscience, but winds up getting dragged into her world, finding that a lack of shared experiences doesn't mean they don't have common enemies. In fact, they actually get along well despite working at cross purposes, as one tries to escape the past and the other embraces it as salvation. 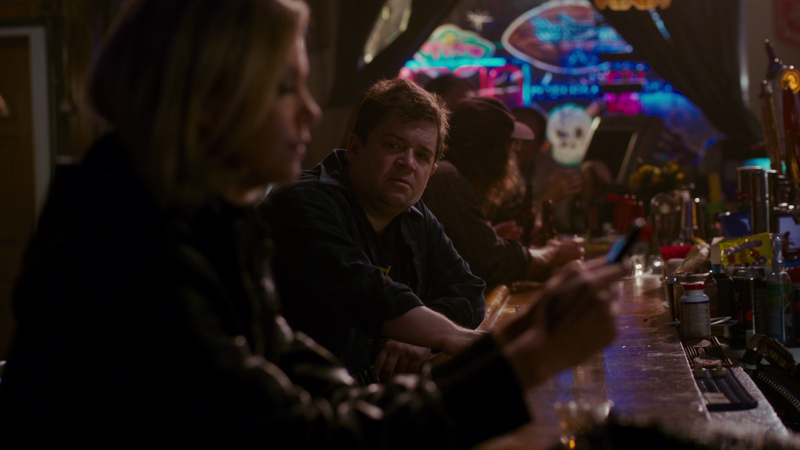 This all sounds rather sitcom-ish, and a set-up for some hilarious hi-jinks, but the resulting film couldn't be less comedic without handing Lars von Trier the reins. Mavis' desperately wants to return to the promise of the far-too-early peak of her life, which is basically what Buddy's wife Beth now possesses, while the town looks at Mavis as the popular girl who became a big success in the big city, not seeing the failures beneath the surface. It's all a rather intricate dissection of what one's point of view does to the definition of success, and the distortion that comes with being a big fish in a tiny, tiny pond.

Thus, it's perfect fodder for director Jason Reitman, who has established himself as a go-to helmer for smart, dark-comedy bummers that illuminate the human condition. The film starts off with an extended, quiet sequence where we learn more about Mavis than you could in a month's worth of therapy sessions, thanks to visual and aural cues that would have been smacked down as rubbish exposition if disseminated in dialogue. Especially if that dialogue came in the cutesy dialogue that marked Cody's big hits to date. Instead, here she shows an ear for witty, yet grounded speech, along with one of the most impressive monologues/rants seen in film in a long time. The use of Mavis' teen-book writing as an internal monologue for a woman trying to recapture her youth was an inspiring decision as well.

Reitman and Cody are blessed though with a core cast that boasts actors of incredible efficiency in Theron and Oswalt. Oswalt once again shows that he is Hollywood's best dramatic sneak-attack, giving Matt the depth and heart he needs to stand up against the emotional WMD that Theron creates in Mavis. In the span of just 93 minutes Theron crafts three or four distinctly and increasingly disturbing characters, leaving the audience guessing, even if they could never predict what they're in store for. Their brilliance is aided and met by Wilson's potentially awkward crush subject, Elizabeth Reaser as Buddy's sunny, somewhat naive wife and Collette Wolfe as Matt's sister (who, allowing for screentime, may be the most heartbreakingly affecting character in the entire film.)

Letting the actors' carry the weight, and keeping the camera's presence mostly camouflaged, Reitman tells Cody's tale of stunted emotional growth with such naturalness that every harsh moment lands like an insult heard over a neighbor's fence, and when things come to a full boil, it's as painful to watch as the bloodiest horror-film massacre you've seen. Of course, for anyone who's a fan of Reitman's it's not much of a spoiler to say you shouldn't expect a happy ending, but the cold, crisp slap of reality served up here is more than most viewer may bargain for. But don't let that stop you from experiencing it. 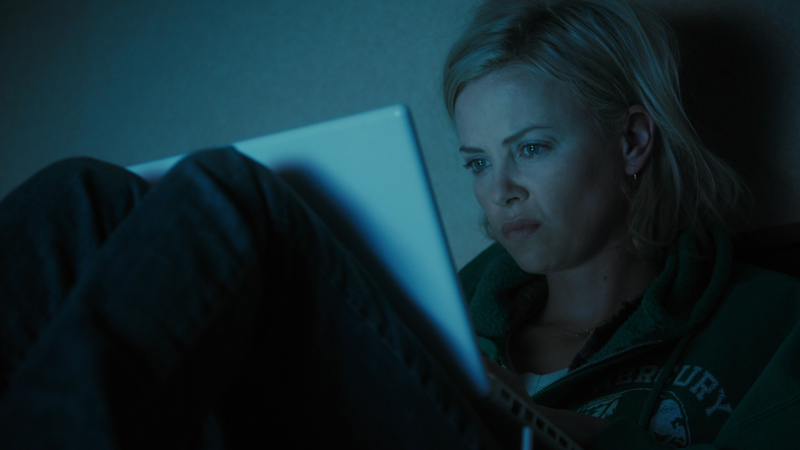 The Disc
This film arrives on a single Blu-Ray disc, packed in a standard BD keepcase, which thankfully has the film's book-cover poster for the cover art (the DVD gets the less impressive "star picture" art.) The disc features an animated main menu with options to watch the film, select scenes, adjust the languages and check out the extras. Audio options include an English 5.1 DTS-HD Master Audio track, French and Spanish 5.1 Dolby Digital tracks, and an English audio description track, while subtitles are available in English, English SDH, French and Spanish.

The Quality
Presented with a 1080p AVC-encoded transfer, this shot-on-video production looks solid all around, with an impressive level of fine detail that shows off the impressive sets and production design, and color that authentically captures the movie's mostly overcast look and feel, while delivering flesh tones appropriately. Black levels are deep and solid, and there are no noticeable digital distractions. Due to the overall dark look of many scenes, the visuals won't blow anyone away, but they are all handled excellently, whether it's the cold dark of the woods or the warm dank feel of Mavis' hotel room.

Young Adult is a pretty intimate movie, bursting forth in just a few select moments (built around music), so it could be said that the 5.1 DTS-HD Master Audio track is a bit of overkill, especially in the early going, but it's a subtle presentation that pays attention to detail, like the atmospheric touches that are frequently present in the surround speakers. The usual suspects, like the dialogue and score, are handled just as well, creating an overall smooth aural environment for the viewer.

The Extras
Up first is an audio commentary with Reitman, DP Eric Steelberg and 1st assistant director/associate producer Jason A. Blumenfeld, recorded on December 1st, 2011, before the movie was released. Having worked together for years, the trio has an easy chemistry, though it's Reitman who runs the show, doing about 90% of the talking, with the other two adding in details as needed. The chat moves smoothly between on-set stories, insight into the story and characters and some technical notes as well. For film fans, it's an excellent listen, as Reitman comes off as a hugely insightful and thoughtful filmmaker who breaks down his work in ways that show he's not just yelling action.

The nearly 18-minute "Misery Loves Company: The Making of Young Adult" is a rather extensive peek at how the film came together, told mainly through on-set footage and interviews with the main collaborators and the several producers. It's followed by the six-minute "The Awful Truth: Deconstructing a Scene," which takes a meeting between Mavis and Matt and shows you how it developed into the final product, putting the script on-screen as its performed, showing various takes and edits made on the set. The look behind the curtain continues in the 45-minute Q&A between Reitman and the New York Times' Janet Maslin, who has plenty of questions for the charming director before eventually turning things over to the audience at the Jacob Burns Film Center in Pleasantville, New York. Though there is some overlap between the three entries and the commentary, between them, there's not much about the film you can't learn on this disc.

The final on-disc extra is a set of seven deleted scenes. The cuts make a lot of sense, since they reveal info that was better left excised or shown later in the film, though the one just makes Mavis seem completely crazy, and it's arguable whether it should have been left in or out of the movie.

Also included is a code to stream the film on your computer, tablet or phone, using the Ultraviolet streaming service. 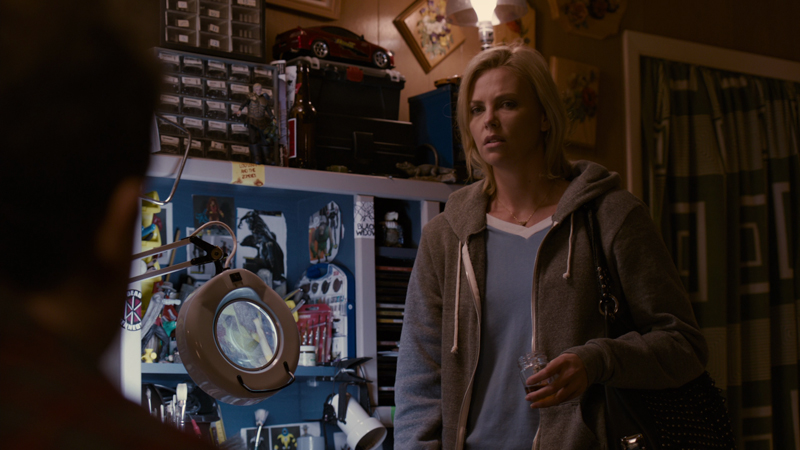 The Bottom Line
Slightly nihilistic at heart, Young Adult is a brilliantly-effective story of two severely broken people that contemplates the causes and consequences of arrested adulthood. With Reitman leading the way off a strong script from Cody, and a cast, especially Theron and Oswalt, that has talent in bucketloads, it's the kind of movie that's a joy to behold, yet not very fun to watch, a film you'll watch through your fingers like a horror movie, thanks to an overwhelming sense of demoralizing humanity and reality. The home release looks and sounds great, and offers up some terrific extras that are anything but fluff, making this a candidate for the must-see downer of the year.