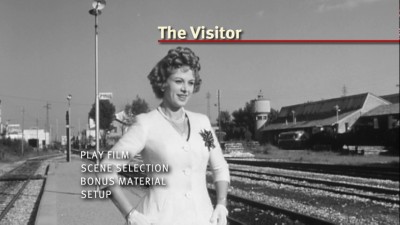 The 1963 Italian film La visita (The Visitor) is a mild romantic comedy starring Sandra Milo (the mistress from 8 1/2) as Pina, a mid-30s woman in Northern Italy looking for love. The movie opens at the train station where she waits for Adolfo (Francois Perier, Le cercle rouge) to arrive from Rome. The two have been corresponding since Pina placed a personal ad stating her intention to marry. Adolfo is a clerk in a bookstore with few prospects, and so he has traveled to the country to meet his potential bride.

The action in La visita takes place over a weekend as the pair get to know one another. Pina is a sweetheart who lives a solitary life that is, in its way, a warped fairy tale fantasy. Her home is decorated in Disneyana, and she has three pets: a dog, a parrot, and a turtle. Pina is well liked in her hamlet, and the village idiot (Mario Adorf) threatens Adolfo the moment he sees him. He says he doesn't like the little man from the big city, and as Adolfo begins to reveal his true nature, we realize he's not wrong. Adolfo is obsessed with money, rude, and even racist. He lusts after Pina's neighbor's teenaged granddaughter (Angela Minervini) and even flirts with her in front of his potential fiancée. Through flashbacks, we see how Pina and Adolfo got involved in this long-distance romance, as well as their secret love lives. Pina has been having an affair with a married trucker (Gastone Moschin), while Adolfo has been getting it on with the woman who makes his shirts.

La visita was directed by Antonio Pietrangeli (Adua and Her Friends). He creates an easygoing, almost pastoral vibe for La visita, capturing the quaintness of small-town living, warts and all. Some of the locals are lecherous and spiteful (they call the curvaceous Pina "Miss Pretty Booty" behind her back, thinking the "Pretty" makes it all okay), and they can also be as intolerant as Adolfo. In one amusing, cathartic scene, they trick him into a game of "soldier's bluff" and send him tumbling down a small embankment. He's pretty drunk at that point, and has shown himself to be a boor. It's difficult to fathom why Pina would still be attracted to him. Pietrangeli allows for subtle moments where we know she sees the truth. Pina isn't blind, she's just...patient.

Sandra Milo is marvelous in the lead. She is quiet and serene and she exudes an inherent charm that makes her instantly likable. Pina is far from the pushy tart she played for Fellini; rather, she masks her shyness by being a caretaker. She plies Adolfo with food and has knitted him a sweater. The more we dislike Adolfo, the more we love Pina, particularly as we realize that she and the trucker have genuine affection for one another. Yet, it's also a credit to the writing that, when the emotional climax of the film arrives, Pina is able to disarm Adolfo and get to the root of his bad behavior. The impulse that compelled the two of them to reach out in the first place is what, at least for now, keeps them together. Pietrangeli and his trio of screenwriters show us the comfort that two lonely people can find in each other's arms, and even if it's temporary, it at least makes sense. 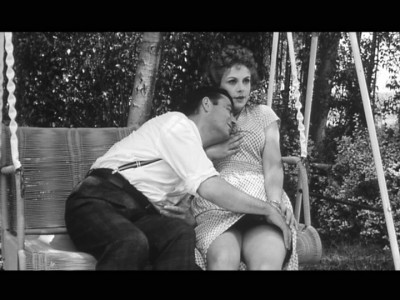 Video:
The black-and-white image for La visita is nicely cleaned up, with little by way of print damage and decent resolution. The image isn't super sharp, but there are no jagged lines or blocking, and light and dark are balanced well. The widescreen image is listed as being in 4:3 letterboxing, but it should be noted that it's actually windowboxed on widescreen televisions. There are significant black bars on all four sides of the frame.

Sound:
The Italian soundtrack is mixed in mono and spread across two-channels. The sound is mostly clean, with only occasional hiss and one or two instances of audible glitches. The optional subtitles are presented at a readable pace and are well written.

Extras:
La visita comes in a standard-sized DVD case with an outer slipcover. Instead of a printed booklet, Raro has put it on the disc as a pdf accessible via your computer. The virtual book has photos and liner notes. 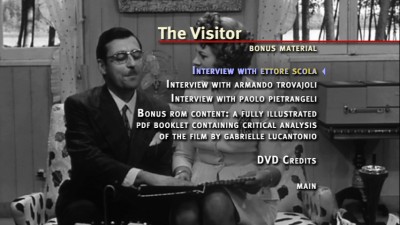 Three video interviews are on the disc, and they feature Eltore Scola, one of the movie's writers (18 minutes, 40 seconds); composer Armando Trovajoli (9:50); and Paolo Pietrangeli, son of Antonio and a director in his own right (14:50). These are contemporary interviews looking back on the production.

FINAL THOUGHTS:
Recommended. La visita is a softly spoken romantic comedy that turns an underlying sadness into a bittersweet union between a lonely country woman (Sandra Milo) and a socially isolated city man (Francois Perier). The script is structured so that, as the illusion of easy love disintegrates, we see the circumstances that brought both would-be lovers to this situation in the first place. Milo is gorgeous and her performance has a lot of heart, turning a rather slender narrative into a winning character study. 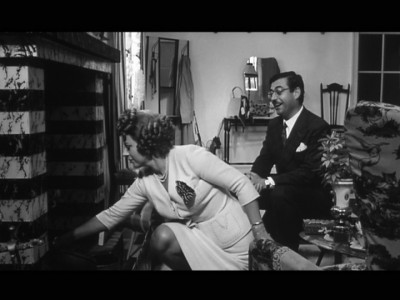