The Weinstein Company // PG-13 // April 10, 2012
List Price: $39.99 [Buy now and save at Amazon]
Review by Stuart Galbraith IV | posted April 16, 2012 | E-mail the Author
I must admit to taking Meryl Streep for granted most of the last 30 years. After a pretty amazing early film career in films like The Deer Hunter (1978), Kramer vs. Kramer (1979), The French Lieutenant's Woman (1981), and Sophie's Choice (1982), for me Streep's movies began a big downward slide beginning with the absurdly overrated Out of Africa (1985). But recently she's managed one revelatory role after another, from her spirited leading performance in the musical Mamma Mia! (2008) to her latest, as British Prime Minster Margaret Thatcher in The Iron Lady (2011). It's a sort-of biopic that's been widely misunderstood, although Streep's performance has been hailed by almost literally everyone who has seen it. Regardless of the film's merits, Streep's frail Lady Margaret struggling with dementia is one the greatest film performances I've ever seen. That woman really can do just about anything.

A British-French co-production filmed in Super 35 and the work of at least a half-dozen production companies (between all their logos and the gajillion trailers on this disc, it takes forever to get to the actual movie), The Weinstein Company's Blu-ray (distributed by Anchor Bay) is visually and aurally pretty much flawless and includes the usual assortment of promotional behind-the-scenes featurettes. 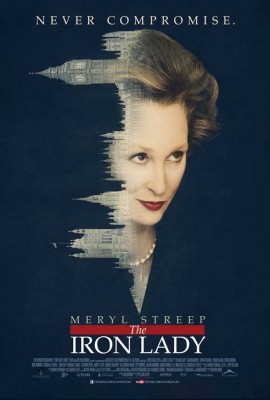 The screenplay by Abi Morgan (whose Shame was also released in 2011) adopts an unsurprising and theatrical yet effective approach, thanks partly to Phyllida Lloyd's cinematic direction. The story opens in 2008 with 82-year-old Lady Thatcher (Streep) long out of politics, widowed, and struggling with dementia. Encouraged to dispose of her late husband's old clothes, she reluctantly sifts through articles that trigger memories of the past, which take the form of flashbacks to her professional triumphs and setbacks. Further, she often hallucinates that husband Denis (Jim Broadbent), who died in 2003, is in the room with her. She's aware he's not really there, but doesn't quite know how to deal with his ghostly presence, either. This might sound a bit clichéd and/or play-like but the way this is handled works for the most part.

The movie touches upon her big moments as Prime Minster: the Brixton Riots, the Falklands War, the bombing of the Grand Hotel that almost killed her and Denis, her opposition to the European Integration.

Both liberals and conservatives have criticized the film, the former believing it basically whitewashes Thatcher's ruinous policies on Britain's poor and middle classes (instead focusing on scenes of Thatcher gradually breaking through that glass ceiling we hear so much about these days), while the latter find offense in what they regard as an invasive depiction of Thatcher as a frail old woman slowly losing her marbles.

I don't think The Iron Lady is much about politics one way or the other, though it seems to have been marketed in that direction, as a standard biopic of an iconic politician.

No, rather The Iron Lady is really more the story of an old lady who, having dedicated her life to public service, as she fades into oblivion searches for validation, as well as a justification for putting her career ahead of her family. It's a very existential film, much more along the lines of Robert Altman's movie about Nixon post-presidency, Secret Honor (1985) than, say, The Queen (2006).

Numerous clues point to this. The majority of Streep's screentime is as the 82-year-old Thatcher, and not during the 11 ½ years she served as Prime Minister. Certain aspects of her political career, such as her likeminded friendship with U.S. President Ronald Reagan, are barely touched upon or not at all.

The movie's arresting first scene has the elderly Thatcher, having slipped out of her home unnoticed by handlers, wandering into a convenience store to buy a pint of milk. Significantly, no one knows who she is, while newspaper headlines note the Islamabad Marriott Hotel bombing, a visual link to the Grand Hotel bombing decades before, and suggesting perhaps that the terrorism Prime Minister Thatcher had been so vocal about defeating continues on unabated and without her to fight it. Similarly, Thatcher's disastrous austerity measures of the 1980s might obviously have been linked to what's happening now across Europe to similar effect, though the movie seems vehemently opposed to taking any political position at all.

In one sense, that's a reasonable approach. Present-day Thatcher catches part of a newscast noting criticism of her policies, but one must remember all the flashbacks are from her Rashomon-like perspective. The film doesn't depict her as heroic; she remembers herself as heroic.

Another clue pointing to this is a brief scene after a present-day dinner party, when an admirer approaches her, gratefully expressing Thatcher's positive impact on her own life. Thatcher's reaction is ambiguous. Does she understand what the young woman is saying? Is she confused? Is she flattered? Earlier, at dinner, she has an awkward "senior moment" but recovers with an articulate, intelligent response to a question. In the end, the Iron Lady of the title seems not to refer to the Prime Minster of the 1980s, but the semi-senile old lady soldiering on in 2008.

The glue holding everything together is Streep's truly incredible performance, and the glue holding the seamless appliances that positively transform her into Thatcher. There have been a number of great performances by actors playing much older characters under heavy makeup, Dustin Hoffman's Jack Crabb in Little Big Man for one, and beginning with Dick Smith's makeup on that film old-age make-up has evolved by leaps and bounds. Even so, Streep's portrayal of the older Thatcher and the makeup assisting her is genuinely startling.

Technically, it's perfect. Even in high-definition, it's basically impossible to tell where Streep's real facial features end and the rubber appliances begin. It's so extraordinarily subtle and realistic one completely accepts it almost instantly, and the make-up, along with Streep's performance, deservedly won numerous awards.

More than that, everything about Streep's performance, from the way she moves her eyes, expressing confusion, to the gingerly manner in which she walks across the room (carefully holding onto the backs of chairs as she goes) not only captures the essence of Thatcher particularly but also of octogenarians generally. At times I felt like I was watching my paternal grandmother come back to life. Absolutely uncanny.

As Prime Minister Thatcher Streep is likewise superb, though in more conventional, less revelatory ways. Here she nails Thatcher's mannerisms and speech perfectly; any doubts about an American playing an Englishwoman so familiar throughout the world instantly evaporates. Surprisingly, the same attention to detail isn't given Alexandra Roach, who plays Thatcher from about ages 18 through 38. She's a decent enough actress, but resembles neither Streep nor Thatcher at all.

Region A encoded, The Iron Lady is presented in 2.35:1, 1080p format and both looks and sounds great, as well such a new and major release should. The 5.1 DTS-HD Master Audio is excellent, and optional English HOH and Spanish subtitles are included. Also included, for those interested, are a DVD and access to digital copies.

Supplements include notably short and standard promotional featurettes, all in standard-def: "Making The Iron Lady," and smaller shorts on "Recreating the Young Margaret Thatcher," "Battle in the House of Commons," "Costume Design: Pearls and Power Suits," and "Denis: The Man Behind the Woman." They're okay, but the disc deserves more.

Ultimately apolitical insofar as that's possible but deeply internal, The Iron Lady is a fascinating little film with a truly remarkable performance by Meryl Streep at its center. Highly Recommended.