On The Bowery - The Films of Lionel Rogosin, Vol. 1 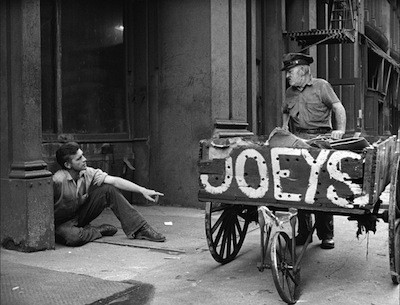 The archival print of On the Bowery, put together by the Cineteca di Bologna and archivist Davide Pozzithe and distributed by the fine people at Milestone Films, is exceptional. The image quality is fantastic, and Bagley's stark photography serves to preserve a history that might otherwise have been lost. The conditions we see are filthy, and yet, sadly, not all that unfamiliar. When I first saw this re-release at a Portland theater last year, I was hit up for spare change as soon as I left the venue, and I'm ashamed to say, my first response was to lie and say I had nothing to give. I thought better of it shortly after and gave the man what I had. I don't expect a pat on the back, I was as selfishly motivated as Gorman or anyone else in the movie; I just admit it here as a reminder to myself to maybe not be so quick to take the default position in the future. How else can I suggest you watch a movie like On the Bowery and listen to what Lionel Rogosin has to say? Critic, heal thyself. 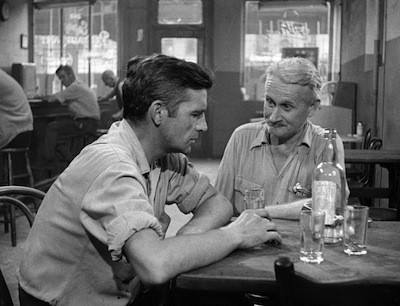 Video:
Shot in full frame, On the Bowery is shown at a 4:3 aspect ratio and, as noted above, the restoration is quite fantastic. The1080p transfer captures the black-and-white photography perfectly, creating a sharp image reminiscent of classic Life magazine photographs that preserves the original journalistic look without overpowering the celluloid with modern sparkle. The dark and light values are well preserved, and the level of detail is far more impressive than one would have ever expected from such an old, independent film. This is one against which many other restorations should be measured; Milestone shows us how to do it.

Sound:
The mono soundtrack comes across clean and clear without any hiss, pops, or other glitches. The volume levels are nice, and the dialogue is easy to discern.

Extras:
This double-disc release of On the Bowery is subtitled The Films of Lionel Rogosin, Volume 1, and if this is anything to go by, it's going to be an exceptional archival series. The restoration efforts are being spearheaded by Rogosin's son, Michael Rogosin, who also directed the 46-minute documentary The Perfect Team: The Making of On the Bowery. This excellent look back at the production and release of this important film played with the theatrical tour, and is well worth revisiting even if you saw it out in the cinema. On the Bowery's historical significance is also highlighted in the Introduction by Martin Scorsese, which can be played at the start of the film or separately. Michael Rogosin also directs the 12-minute "A Walk Through the Bowery," taking us back to the streets where his father shot the film and, coincidentally, where Scorsese grew up, looking at the location now and discussing the history of the area.

The bonus features on disc 1 all, in a fashion, look at the reality of the Bowery and how it was depicted in other filmed efforts. "Street of Forgotten Men" is a short newsreel of the Bowery from 133. It's more lurid in presentation, with the narration playing up the hidden camera aspects of the filming. On the other side of the timeline, Rhody Streeter and Tony Ganz's "Bowery Men's Shelter" is a 10-minte short from 1972. This shows men going in and out of a flop, and explores some of the reasons they are there, including mental disease and alcoholism, as well as some racial issues. It's a fairly bleak portrait. As the saying goes, the more things change, the more they stay the same.

The On the Bowery theatrical trailer rounds out Disc 1. It's a promo that was cut together for the re-release.

Disc 2 is devoted to two other efforts from Rogosin. His earliest work, Out, runs just under half an hour and was made immediately prior to On the Bowery. Produced in conjunction with the United Nations, this documentary short chronicles the journey of Hungarian refugees leaving Austria following a revolution. Rogosin shows us both the point at which they sneak across the border and the time spent in the refugee camp. He makes the film personal by focusing on several specific "characters," with the most time given to a widowed mother trying to find a new home for her and her children. She gets stuck at the camp with no prospects for anywhere to go. Her story is told in the first-person, in dubbed voiceover. The experience related is heartbreaking and harrowing, and despite its intention of inspiring action on behalf of the displaced, never feels heavy-handed.

Good Times, Wonderful Times is Rogosin's feature-length anti-war film. Released in 1964, it combines archival footage of war atrocities with conversations between London partygoers and, for a brief bit, aged veterans who still believe in the virtues of military action. The film directly juxtaposes these banal conversations with the true consequences of human prejudice and ethical insensitivity. The effects of inaction or moral relativism are underlined. Arguments in favor of war as a means for population control, for instance, fail to carry weight when followed by images of mass graves in concentration camps. As those old men talk about sending their young offspring off to battle, Rogosin cuts in footage of Hitler Youth. As horrific as it sounds, Good Times, Wonderful Times is not a cynical film. Rather, the director often reveals a macabre sense of humor in its assemblage. More importantly, it ends by highlighting the positive effects of organized protest. This and footage of Dr. Martin Luther King Jr. shows that Social Darwinism need not be so aggressive, there is a chance to evolve toward the positive.

FINAL THOUGHTS:
Highly Recommended. Lionel Rogosin's groundbreaking documentary work influenced the likes of Martin Scorsese and John Cassavetes, and the restoration work on display on the Blu-Ray On The Bowery - The Films of Lionel Rogosin, Vol. 1 gives this seminal filmmaker's earliest work a marvelous, well-deserved showcase. The lead feature is the best: On the Bowery paints a vivid portrait of men who have fallen by the wayside, blending fact and fiction for a new form of independent expression. This is coupled with Rogosin's later anti-war film, Good Times, Wonderful Times, a striking indictment of the kind of social malaise that allows for violence. The bonus features enhance the subject matter in excellent ways, making for a truly special overall package. 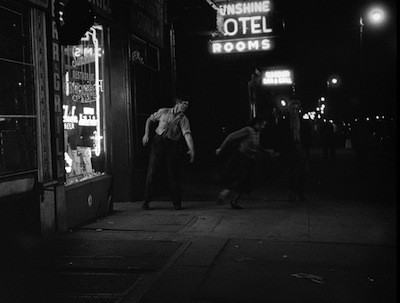