Lady and the Tramp: Diamond Edition 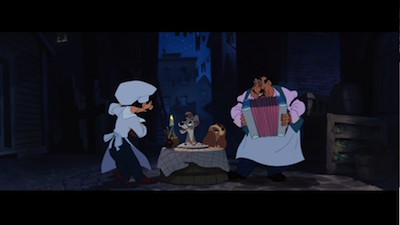 So the moral of the story is kids ruin everything.

I know that might be strange for what is ostensibly considered a children's movie, but even watching it at a young age, Lady and the Tramp played as a film with a coded message: beware of the yoke of adulthood, it's a trap. As an adult, the messages seem even more clear, and the subtext of this romantic drama about a pair of canine star-crossed lovers is surprisingly dark. This is a movie, after all, with a Russian wolfhound who quotes Maxim Gorky from behind dog-pound bars, and a cocker spaniel whose reputation has been ruined receives offers of marriage from a Scotty and a bloodhound so she need not live her life in shame.

Lady and the Tramp is easily one of my favorite films of the Disney canon. I was always drawn to the stories about animals living a secret life just out of earshot, talking in English, completely aware of the unpredictable moods of their human companions. (Ingeniously, in Lady and the Tramp, the animators frame a good majority of the shots from the dog's eye view, and so humans appear with their heads cut off by the top of the screen.) In Lady and the Tramp, when dogs aren't busy being scratched behind the ears, they are roaming the neighborhood, conforming to ethnic stereotypes, and wondering at the craziness of their owners. Lady (voiced by Disney regular Barbara Luddy) enters the home of John Dear and Darling as a puppy. She grows up with a cushy life, but things change when the couple has a baby boy. Suddenly, she is not the sole apple of their eye, and her attempts to adjust get derailed when the parents go away on a romantic getaway. Aunt Sarah (Verna Felton) comes to babysit, bringing her two Siamese cats with her. The cats get Lady in trouble, and Lady gets a muzzle. You'd run away, too, if you were her!

While on the run, Lady encounters that rapscallion Tramp (Larry Roberts), whose lackadaisical attitude she previously found annoying. Tramp lives life as a stray, eating at a different restaurant every night, going where he pleases, and making himself a nuisance to the local dogcatcher. Now that she needs his help, Lady takes it. He leads her to the local zoo where he cons a beaver into taking off her muzzle. Then it's a date night out on the town and, well, cuddling in a shared dog bed, until morning and animal control make all this innocent romance seem cheap. I defy anyone not to like Lady and the Tramp at this point, when the female lead enters the hoosegow to a chorus of howling dogs of all types and dispositions. Chanteuse Peggy Lee shows up as Peg, a sassy canine with a stage background who sings an ode to Tramp. Lee also does the voices of Darling and the two cats, Si and Am. This is progressive Disney: a torch singer will serenade another dog on his way to the gas chamber. 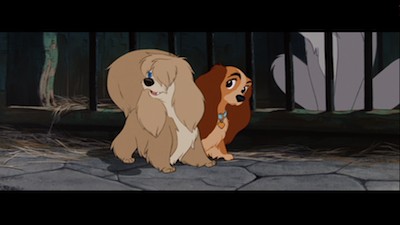 Again, there is some dark stuff in here. Lady and the Tramp has its moments of violence, particularly in the pivotal scenes where Tramp proves his worth. He fights off other dogs and rats with glowing eyes, putting it all on the line to protect his lover. In other words, his carefree lifestyle is not without its difficult choices, nor is this movie always as easygoing as it appears on the surface. One of the film's claims to fame is that it's the only Disney story to be built from scratch, and the boldness that comes from full ownership definitely shows through. Multiple writers are credited with dreaming this one up, and despite the many hands in the kitchen, the narrative meat is surprisingly free of fat. Lady and the Tramp has a tight construction, proving a complicated story told simply can have tremendous impact. There is no reason a drama can't thrill, entice, and inspire in equal measure. Lady and the Tramp tugs at the heartstrings, but it's also rollicking good fun. 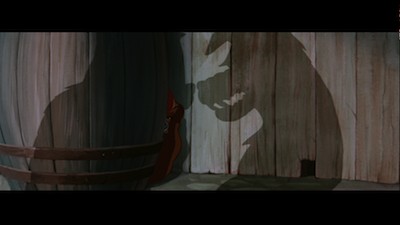 Not to mention how beautifully animated it is. This is a clean production, with detailed art direction and flawless character animation. Dog owners will be suitably impressed by the behavior the artists capture, and how they interpret certain physical familiarities as emotive expressions. Backgrounds are carefully designed, and each dog has an individual personality that is readily apparent. Colors are also vibrant, but that's easy to spot. If you want to see something truly special, keep an eye out for the shadows. Each figure has one, something we take for granted in a live-action movie. Here, the decision to make sure characters are properly lit and thus have their own shadows eventually pays off. There are multiple times when silhouettes are used to achieve a specific audience response.

Older Disney films have long surpassed the need to justify themselves as more than "kid's stuff," but Lady and the Tramp is an exceptionally mature work, even for the best in the studio's old-school canon. As per usual, most of the heavier themes will go over a child's head, but I like to think the seeds stories like this one plant in impressionable minds will have significant benefit in the future. Hell, I learned to appreciate both a well-told screenplay and Tramp's carefree lifestyle even when I was just a wee second-grader. (Fun fact: the soundtrack album is the first vinyl record I bought myself, and I still own that revered platter to this day.) I've spent much of my adult life avoiding wearing a collar or getting a restrictive tag. And though I know this movie ends with Tramp giving in, settling down with Lady and accepting the family life, let's be honest, the filmmakers don't really put their heart into selling that message. Hell, you can already tell the dude is bored out of his skull. He's going to get back to getting up to no good in no time! 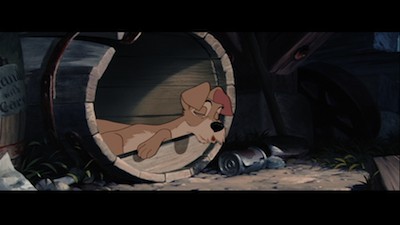 Video:
The Lady and the Tramp: Diamond Edition presents the 1955 animated movie as a fully modern 1080p/AVC-encoded video transfer at a super wide 2.55:1 aspect ratio. It's impossible to resort to hyperbole in any way when praising this Blu-Ray, even though most of what I am going to say will in fact read like enthusiastic exaggeration. The unvarnished truth is that the image quality here is perfect in every way. Colors are vibrant, resolution is sharp, there is information evident in all corners of the frame; in short, it looks like everything on the screen is happening right now. Something I've never said of live-action movie, which, you know, in some way actually happened. This animated feature appears freshly minted, without a scratch or a blemish. There isn't a pixel out of place or an ignored jagged line. If this isn't the best Blu I've ever seen, it's close.

Sound:
There are several audio options with the main ones being a DTS-HD Master Audio 7.1 surround track and a Master Audio 3.0 mix intended to more closely mimic the original sound work as you'd have heard it in the cinema. Either mix is going to serve your needs, it all really depends on your preference. The multi-channel track is noticeably louder, as it fills the room and creates a nice audio cocoon in which to enjoy Lady and the Tramp. The 3.0 doesn't really downgrade these pleasures by all that much. Most folks won't need to even stray from the default option.

There is also a French version in 5.1, and subtitles in French, Spanish, and English SDH.

Extras:
In the edition I received, the main physical extra is a bonus DVD with the movie in standard-definition. There is also a three-disc version on the market with an extra digital copy.

Bonus features on the Blu-Ray are extensive, including a full carryover from Disney's 2006 Platinum Edition DVD. They are actually even calling it the "Classic DVD" section, and it's nice to see all the great material here, including the long mix of vintage/modern that comprises the near-hour of "Lady's Pedigree: The Making of Lady and the Tramp", four additional segments called "Excerpts from Disneyland TV Shows,", and the double dose of storyboard material, "Finding Lady: The Art of the Storyboard" and the not-as-long-as-it-sounds "Original 1943 Storyboard Version of the Film". There are two deleted scenes, and music gets a focus in "The Siamese Cat Song: Finding a Voice for the Cats" and a music video for "Bella Notte." Standard theatrical trailers and a young audience feature "PuppyPedia: Going to the Dogs*" round out this section.

Disney's daughter, Diane Disney Miller, shows up in two special features: an introduction* and an eight-minute tribute to her father, "Remembering Dad*."

There are also three more deleted scenes cobbled together from storyboards, and a quick look at a deleted song, "I'm as Free as the Breeze," which was removed when it was decided Tramp himself would not sing. 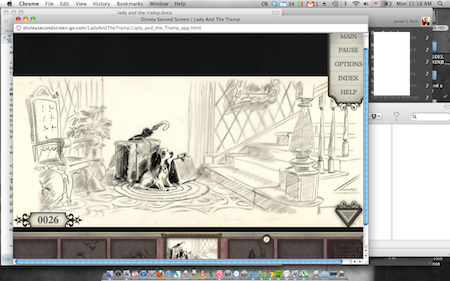 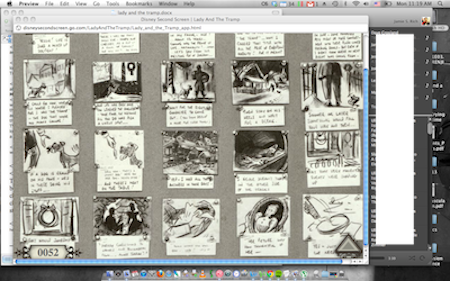 Screengrabs of Second Screen on my laptop.

The motherload, however, is easily the "Audio Commentary: Inside Walt's Story Meetings" alternate soundtrack and its companion "Disney Second Screen, Featuring 'Inside Walt's Story Meetings.'" For anyone who owns any recent Disney DVDs--though for me most notably Bambi--you know the drill. The audio commentary is built out of notes taken when Walt and his writers were going over the story. This provides an awesome insight into how a movie like Lady and the Tramp comes together, giving us a direct look in the planning rather than the conjecture of most audio commentaries (however informative they may be). The "second screen" feature allows you to watch the film with your iPad or computer at the ready and get added features when the device syncs up to your TV. You can then see further behind-the-scenes options, including more art and interactive activities. I love this feature and wish more studios would start exploring the technology. (Instructions are included in a handy booklet in the case.)

Note: The new video features are in high-def, the "classic" are still in standard. The above features with a * are also on the bonus DVD.

FINAL THOUGHTS:
DVD Talk Collector Series. I am an unabashed fan of Lady and the Tramp, and the Diamond Edition Blu-Ray delivers only the best for Disney's best. Image and sound quality shine like never before, giving a whole new generation a chance to fall in love alongside the two dogs from the opposite sides of the tracks. Funny, charming, and full of deeper life lessons, Lady and the Tramp is one of the studio's most assured animated efforts. Not to be missed. 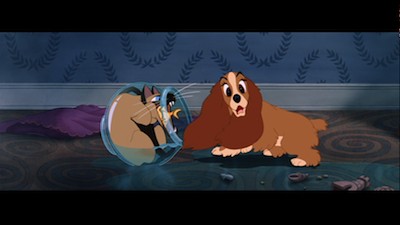