Centurions: The Original Miniseries, The


There's no doubt the DVD release of the original five-part miniseries for "The Centurions" will turn the head of many aged comic book purveyor, if only for the involvement of comic legends Jack Kirby and Gil Kane. Although Kirby and Kane 's ideas (as well as some other figures in sci-fi) are definitely visible in the series, in the grand scheme of things they were largely a framework for the Ruby-Spears product. Now, 25-plus years later the series has a very generic feel to it, so a word of warning to viewers tuning in just on name recognition, don't expect anything approaching the highest quality of either men's comic book contributions. Arriving from the Warner Archives via a manufactured-on-demand disc, "The Centurions: The Original Miniseries" isn't really a miniseries in the sense of telling one large story split into smaller installments. In a historical context the fact these five standalone episodes aired over one week, months before the full series debuted validates the terminology; I must still confess the lack of over arcing cohesion to this release didn't exactly meet my initial expectations. 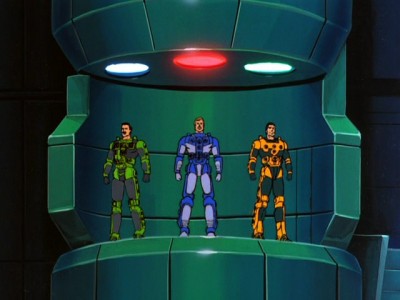 The Centurions themselves are a pretty standard sci-fi special forces team consisting of Max Ray, an aquatic specialist, Jake Rockwell, who handles ground operations, and Ace McCloud, the de-facto pilot. Tasked with foiling a new nefarious plot every week, often tying back to their arch nemesis Doc Terror (a clunky cyborg stereotype), the selling point of the team is their mobile load out system, allowing each member to call in a specialty suit to fit the needs of any particular situation; in reality, most of these suits are cosmetic only. To a jaded adult viewer, this gimmick is a not so hidden attempt to sell multiple versions of the same character to younger fans. Yet, despite the by-the-book premise, "The Centurions" still has something to offer. 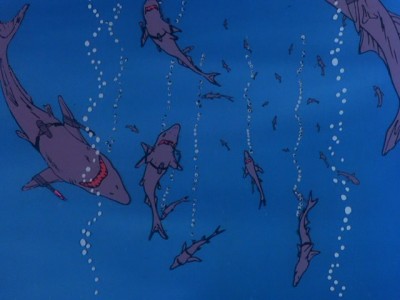 The very 80s look of "The Centurions" is still eye-catching, even if the actual animation is a bit stiff and clunky (dialogue scenes consist of static characters who posses crudely animated mouths). That said, some of the locales the heroes visit have incredibly distinct designs; no one can fault the series for recycling interiors episode after episode. One standout occurs in the episode "An Alien Affair" where the ship the trio explores is right out of Ridley Scott's "Alien," the homage is not a cheap rip-off, as the nod is blatantly references by one of the characters that states "this reminds me of an old sci-fi movie." For what is supposedly a kid's show, it's a gutsy movie on the part of the writers, who continue the homage by borrowing some set-pieces out of the film, while the titular alien itself is a completely different beast from the nightmarish H.R. Giger creation. 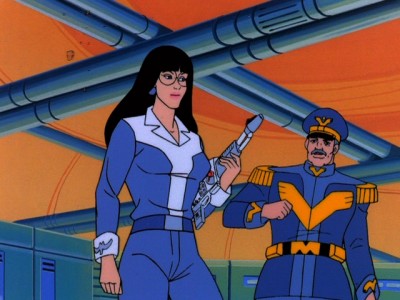 By and large "The Centurions" is entertaining for a younger audience. The stories never languish and spin their wheels for time, making for a steady stream of action. Sadly, the primitive quality of the animation and perhaps too simplified plots make the longevity of the series questionable. The full series added two more members to the team, but this debut release is just the original trio and unlike some modern animated faire, there's no character development, just three broadly sketched stereotypes, right down to their names that coincide with their area of expertise. "The Centurions" is at least a decent time waster and a nice nostalgic trip back to the days of mindless action attached to a cool gimmick designed to do one thing: sell toys.


The 1.37:1 original aspect ratio transfer is decent overall. The animation is far from clean, with vivid colors that tend to bleed at times. The transfer also sports some minor compression artifacts and an overall soft look to the whole image.


The Dolby Digital English stereo audio track suffers from some minor distortion with vocal work having a lightly hollow quality to them. Everything is mixed together in the way you'd expect from a mid-80s afternoon cartoon.

There must be a cult audience out there for "The Centurions," because honestly, there's not really another logical reason to explain this release. It's a by the book, generic mid-80s cartoon and thankfully this five-episode intro release is over before it gets a chance to wear out its welcome. Rent It.