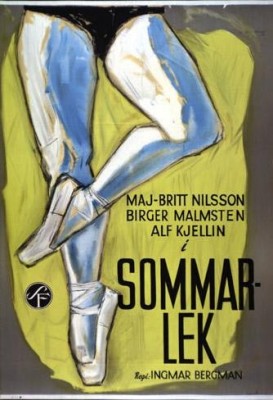 Please Note: The images used here are promotional and are not taken from the Blu-ray edition under review.

Thanks to The Criterion Collection, summer 2012 is, aptly, Bergman season: In concurrence with their release of the Swedish master's 1953 turning-point film Summer with Monika, they're also making available an earlier sea-and-sun youthful-romance reverie, his more minor but still haunting Summer Interlude, released in 1951. This one stops short of Monika's bolder, starker stylistic and narrative forays into the agonies and ecstasies of young love, but despite its existing in something of a limbo between engaged but by-the-rules narrative/dramatic filmmaking and the unique auteur's voice that one sees in the process of emerging (through this film from those early Bergmans that Criterion has also given us access to and on through Monika to The Seventh Seal), Summer Interlude still has the marks of a very strong, if not yet fully honed and individuated, cinematic voice.

Both Monika and Interlude tell the bittersweet, tender stories of young summer love that blazes with unmatched intensity but is cut short, altering the lovers forever (and not necessarily for the better). But where Monika's rawness, unsparing incisiveness, and strikingly precise visuals anticipate Bergman's later artistically matchless, searing, almost abstract crystallizations of near-tangible emotion and anguished psychological and philosophical states like The Silence, Persona, and Cries and Whispers, Summer Interlude places itself alongside Bergman's other semi-autobiographical self-portraits of the artist's lot and condition: Its protagonist, Maria (Maj-Britt Nilsson), is a ballerina unhappily approaching middle age who, as the prepares for a rehearsal of Swan Lake (shades of Black Swan, though this is definitely better, and The Red Shoes, though this certainly isn't that good), receives a mysterious package containing a diary that obviously has some tremendous, troubling significance for her. Is it a coincidence that a power outage cuts the rehearsal short, obscuring and halting her stage-lit performance with a blanket of total darkness? Or that a disagreeably cool exchange with the journalist (Alf Kjellin) with whom she's having a tepid, secretive affair then leaves her completely free for the day? In any case, at the last possible minute she spontaneously jumps onto a ferry she seems to know, which conveys her from her muted, dissatisfied present life into the past that that unexplained diary has evoked, back toward the island/seashore-cottage community outside the city where she spent her summers as an adolescent and young woman. Though the island is, in the film's present, rainy and drear, we're soon flashing back with Maria to one unforgettably rapturous, tragic summer long ago.... 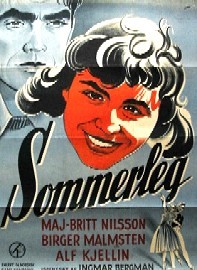 The summer we revisit is passed by Maria in a youthfully carefree way at her family's summer cottage before she heads back to the city and the prestigious ballet school that's accepted her. Maria idles the days away by boating; evading the benign, half-creepy, half-amusing advances of her drunken Uncle Erland (Georg Funkquist); and falling in love with Henrik (Birger Malmsten), a lonely, handsome young man staying the summer on the next island over with his wealthy, decrepit aunt and her friend, an asinine pastor (Gunnar Olsson, part of Bergman's gallery of holy fools/villains that reached its pinnacle with Jan Malmsjo's punitive bishop/stepfather in Fanny and Alexander). Both Monika and Henrik have absent or dead parents, leaving them to have in common a state of quasi-orphanhood in the hands of problematic older relatives and positioning them to understand each other in a special way. That in turn leads to their falling in love over the course of all the boat rides, swimming expeditions, and walks they take together out in the open summer air. Already, however, Maria's dedication to her vocation/art drives a small but discernible wedge between her and her lover -- a compartmentalization they seem to be on their way to reconciling when cruel happenstance takes Henrik away from Maria forever. 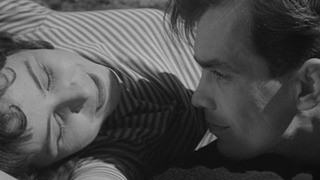 The bitter, destructive lesson Maria learned that summer (helped along by a subsequent trip with old Uncle Erland to help her forget her heartbreak during which, it's implied, he took advantage of Maria's vulnerability in the wake of her loss and acted on his thinly-veiled desire for her) is that love is too potentially painful to be worth the risk and that shutting oneself off in one's art can fortify against it; she suffers from the same fatal false solution to life's pain as Ingrid Bergman's pianist in Autumn Sonata, and she and the film take a similar present-to-past trajectory, both geographically and mentally, to the one Wild Strawberries's emotionally aloof professor followed in order to illuminate the self-protectiveness that has left that film's rueful old man and Summer Interlude's Maria presently closed off and unable to love in the only true, open way, the one that always carries the risk of pain. The diary, kept by Uncle Erland and finally given to Maria as his one redeeming act, holds some long-ago expressions of that pure, defenseless love and is the talisman that may just be able to resurrect Maria from her longstanding emotional death. 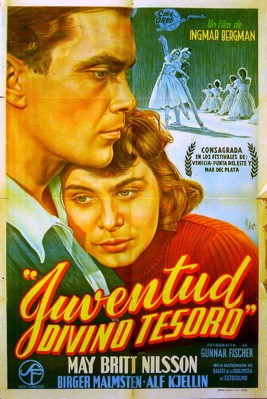 Summer Interlude is more wide-eyed, optimistic, and simple (if not simplistic) than Wild Strawberries, with its almost-too-late return to the ability to love, or Autumn Sonata, with its lost-cause emotional refugee; it plumbs some profounder depths along the way but has what is probably the closest thing there is in Bergman (in his dramas, at least) to a resolved, "happy" ending. That intriguingly outside-the-lines but overall safer sensibility than would later reveal itself is there in the filmmaking, too, with Bergman and cinematographer Gunnar Fischer just starting to stretch their wings: The Bergman regard for the power of nature as joyously exhilarating but always potentially ominous and inhumane is well on its way to maturation here, as evinced by some splendidly shot and edited location exteriors (particularly effective is one unexpected pan up to the sky at a crucial moment). And their mastery of film's traditional grammar is nothing to sneeze at: a long medium-shot track that pulls a dazed Maria down a cavernous hospital hallway after witnessing the pitiless sight of Henrik's death, her uncle's outsized shadow looming behind her, uses lighting and composition elements that are known quantities, but Bergman and Fischer are master chefs who know just the right proportions to make such basic ingredients sing. 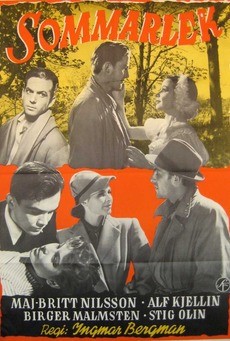 However, the film's big thematic/narrative and aesthetic leap comes, fittingly enough, almost at the end, as if extending a bridge out toward all the future Bergman films that would expand into masterpieces the personally felt preoccupations and specifically bold visual sensibility he's just beginning to openly flirt with here. On a rainy evening after yet another performance, Maria experiences a deep, dark night of the artist's soul at the hands of her company's wizened, morose ballet master (Stig Olin), who has seen dancers come and go, no matter how good or artistically brilliant: in a perhaps drunken mood of reflection, he delivers a castigating monologue about the false sense of elevation and detachment that people like Maria (and himself) find to make themselves miserable with. The tough art vs. life question makes its mark visually, too, with Bergman and Fischer rendering the moment cinematically rich by creating (through the careful selection and framing of a rainy window; Maria's face in her makeup mirror as she strips away her stage mask; and oddly, uncomfortably near close-ups) an embryonic version of the trademark claustrophobia with which Bergman's later works are replete. Summer Interlude is on the whole a very well-crafted, strong, elegant, but perhaps more artisanal than artistic setting in which Bergman has placed this most powerful, remarkable penultimate moment, the crown jewel that gives off dazzling, tantalizing glimmers of the greatness to come and lends luster to the film in its entirety. 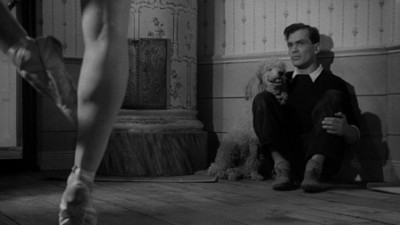 
The AVC/MPEG-4, 1080/24p, 1.37:1 aspect-ratio transfer has more visible wear and tear than was left in the spectacular cleanup job Criterion did for their concurrent release of Summer with Monika, but it's still very, very good; flicker and tiny scratches are present but minor and very intermittent, the black-and-white vividness is strong at nearly every point, and the fine-grained celluloid texture has been well-preserved, making for a sufficiently rich visual experience of the film, with no flaws evident enough to compromise it.


The uncompressed PCM 1.0 monaural soundtrack (in Swedish with optional English subtitles) is nicely done; any moments of distortion (which amount less to actual distortion than a certain occasional over-brassiness in, for example, ballet sequences with full orchestra, with all dialogue immediate and clear) sound more like the limitations of sound technology of the period than anything to do with the degree of care that was taken in bringing that sound to the disc.


Of the two Bergmans now being released simultaneously by Criterion, Summer with Monika is the one with all the extras; this comparatively bare-bones (and lower-priced) release has no supplements on the disc, though it does contain a 20-page booklet featuring an essay on the film by Criterion's frequently-employed Bergman expert Peter Cowie as well as, in the "About the Transfer" section in the back, a detailed explanation of the not-entirely-smooth process of obtaining the best source materials, which conscientiously accounts for the transfer's slight inferiority in quality compared to Monika's.


A lovely artifact from the early-'50s transitional period in Bergman's career -- a time during which he was gradually but surely developing from unusually gifted studio craftsman to world-class master -- 1951's Summer Interlude is minor as Bergman, to be sure, but it's not at all a "minor" film per se. It offers, in fact, the best of both the worlds Bergman was straddling at the time, with none of the awkward uncertainty or asymmetry that would have come had he been suffering from ambivalence or being of two contradictory minds. Bergman is beyond confident in his more traditional, familiar handling of his cinematic tools as the film makes its astute-enough but conventional dramatic progression, relating a troubled woman's journey back to the shattered youthful love that has left her with the inability to open her heart; his mastery of and accurate intuition within standard cinematic grammar are impressive on their own. In addition, there are exquisite moments amid nature, with the young lovers together in their remote summertime surroundings and the sun lighting up the vast, rippling surface of the sea, as well as the culminating beat of an artist facing herself down at a moment of despair, doubt, and reckoning, where Bergman gives us a preliminary glimpse of his further aesthetic ambitions, bringing his very particular, still in-utero visual/tonal touch to the image and the performances to leave us with that uncanny, deeply affected sense and put us in that sobered, near-spooked state that he would later be able to take us into for a film's entire running time. The contrast doesn't jar, though; the filmmaker's assurance is already there as he continues to develop and hone his distinctive voice, and the more standard moments are integrated well, so that the film's prosaic (but still, always, finely crafted) aspects seem to provide the perfect setting into which the rarer jewels -- the moments that approach profundity -- can be fitted snugly, all to harmonious effect. Summer Interlude shouldn't be anyone's introduction to Bergman the Artist, but it is a well and fully realized picture that engages on its own terms and has, for the initiated, the added attraction of capturing one of cinema's greats just as he's emerging from the chrysalis stage and beginning to show some quick but unmistakable flashes of his true, glorious, inimitable colors. Highly Recommended.