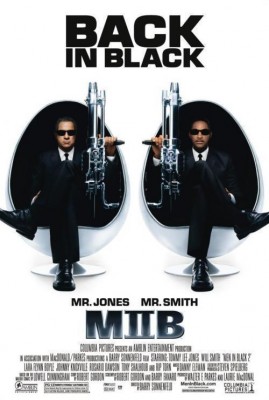 I remember walking out of the theater after seeing Men in Black II and thinking, "Well, that was disappointing." Men in Black still holds up as a goofy science-fiction thrill ride thanks to its stars, Will Smith and Tommy Lee Jones, making its sequel feel all the more inadequate. The story of Men in Black II was obviously in flux at the time director Barry Sonnenfeld and company started filming, and the whole thing feels like it barely made it together in time for release. That's not to say Men in Black II is a total failure. Smith and Jones stick their shtick, and MIB agency regulars Frank the Pug and the hard-partying worms are often funny. Men in Black II is a disappointment the filmmakers hopefully learned from in crafting the upcoming Men in Black III.

Evil extraterrestrial queen Serleena comes to earth and takes the form of a Victoria's Secret model - Lara Flynn Boyle plays Serleena for most of the film - so she can find the Light of Zartha and control the universe. Agent J (Smith) takes the case after interrogating Laura Vasquez (Rosario Dawson), a pretty pizzeria clerk who narrowly escaped Serleena. Agent J realizes that retired Agent K (Jones) is the only man who knows about the Light of Zartha, so J finds K at his post-office job and drags him back to MIB headquarters to track down Serleena.

Right away it's clear there is not much story to be found in Men in Black II, which is mostly a series of occurrences involving the agents and Serleena. There is some back-story about the MIB refusing to protect the Light of Zartha from Serleena in the 1970s so as not to upset their neutrality with alien races, but Men in Black II is most concerned with allowing Smith to mug for the camera. This works to a point, and most of the jokes hold up ten years later. Jones's Agent K is as cranky as ever, and this rocky partnership is the best part of the film.

Sonnenfeld started his career as a talented cinematographer for most of the early Coen Brothers films, and his directorial resume includes a few standout comedies - Get Shorty and The Addams Family - among junk like Wild Wild West and RV. Sonnenfeld fails to give Men in Black II much direction, and gets little to no emotion out of Boyle, who earned a Razzie nomination for her wooden performance. Neither Serleena nor the Light of Zartha is especially compelling, and I prefer the scenes when Agent K is bickering with Agent J about coming back to the MIB.

The effects are intentionally cartoony, but some of the aliens, like a two-headed Johnny Knoxville, are pretty nifty. The interior of the MIB headquarters is like an airport terminal, complete with security lines and fast-food restaurants. The product placement is pretty egregious, and I half expected Smith to defeat Serleena by dropping a Whopper on her head. On second thought, the product placement mirrors the packaging of the film itself. Men in Black II is slick, disposable mass-audience entertainment that will leave you hungry for something more filling.

Men in Black II makes its Blu-ray debut with a nice 1.85:1/1080p/AVC-encoded transfer from Sony. This is a big, bright image with plenty of detail in both close-ups and wide shots. The interior of the MIB headquarters sparkles, and every wrinkle is visible on Jones's face. The detail is so good that some of the effects appear worse for the wear. Colors are perfectly saturated, but skin tones are slightly anemic. Blacks are deep and do not crush, and the image retains a light layer of grain. I did notice some light edge enhancement and some minor shimmering, but this is another nice catalog effort from Sony.

The 5.1 DTS-HD Master Audio soundtrack is also strong, and it provides an immersive action environment for viewers. Dialogue is crisp and audible, and clarity is excellent in both soft and loud exchanges. Ambient effects fill the sound field - the bustle of MIB headquarters and the busy city streets envelop the viewer - and action effects bring the subwoofer and rear speakers to life. The mix is not quite as active as those for more recent releases, but Men in Black II sounds great. French, Spanish and Portuguese 5.1 Dolby Digital tracks are also available, as are English, English SDH, French, Spanish and Portuguese subtitles.

All extras from the Special Edition DVD find their way to Blu-ray, though no new material is available.

My feelings about Men in Black II remain much the same as they were when I left the theater ten years ago: The film is a disappointing, slipshod sequel that lacks a cohesive story and a compelling villain. Will Smith and Tommy Lee Jones buoy Men in Black II with their uneasy chemistry, but most of the first film's charm is lost in this inferior second outing. At least Sony's Blu-ray looks and sounds great and includes a number of extras. With Men in Black III on the horizon, you may want to Rent It.