You Have To Run Fast

MGM // Unrated // January 20, 2012
List Price: $19.98 [Buy now and save at Amazon]
Review by Stuart Galbraith IV | posted February 23, 2012 | E-mail the Author
Undistinguished but not bad, You Have to Run Fast (1961) is a late-entry noir, produced on the cheap (probably in the $100,000 range) by that prolific triumvirate of producer Robert E. Kent, director Edward L. Cahn, and (usually) writer Orville H. Hampton. Though hardly classics, their dozens of films together during the late 1950s and early-'60s were usually efficient programmers, a few of which (It! The Terror from Beyond Space, Riot in Juvenile Prison) achieved some minor degree of fame.

Movies like these were the result of a product shortage that plagued the fifties. The big studios were making far fewer movies for various reasons, and while attendance dropped sharply after 1946, there were still thousands of movie theaters needing to change their programs every week. Low-budget companies like AIP learned to cater to teenagers and drive-ins, but most specializing in low-budget fare (Allied Artists, United Artists, Astor, et al.) were mainly interested in providing product, anything, so that independently owned movie theaters could keep offering something new, week-in and week-out.

By 1961, the distribution of throwaways like You Have to Run Fast seems to have been reduced to drive-ins and rural movie houses that couldn't afford anything better, and decaying downtown movie palaces passed over for roadshow use (and widescreen formats like Todd-AO and Cinerama), and houses catering to bored, undiscriminating third-shift factory workers and drunks looking for a place to sleep it off. Though cheap, producer Kent's movies at least are professional Hollywood productions. By the late-1960s movies of this type and budget level pretty much vanished.

An MGM "Limited Edition Collection," manufactured-on-demand release, You Have to Run Fast gets a very decent, 16:9 enhanced widescreen transfer though, not surprisingly, no extra features. 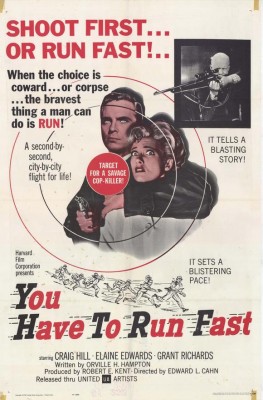 I know some studios are reluctant to use original poster art for their DVD covers, but surely this rather good one-sheet is preferable to the DVD cover above?

After roughing up a detective a little too hard, two gangsters including Big Jim Craven (Grant Richards), dump the dying man at the feet of Dr. Roger Condon (Craig Hill) and skedaddle. The patient dies and Condon, upstanding citizen that he is, helpfully identifies Craven to police. Craven, however, escapes custody and Condon's life suddenly ain't worth a hill of beans. Shaving his mustache, trading in his glasses for contacts, and darkening his prematurely gray hair, Condon himself disappears, assuming the name "Frank Harlow." As Harlow, Condon opens a modest sporting goods store up in the mountains (played, apparently, by the then-backwoods community of Thousand Oaks, California).

Modestly entertaining, You Have to Run Fast is efficiently directed and offers a very lively if at times absurd and unintentionally funny climax. Most willing to give You Have To Run Fast a try in 2012 will be unfamiliar with the cast, which is lacking the usual assortment of players fans of such pictures enjoy seeing again and again: Gloria Talbot, John Agar, Allison Hayes, etc. Despite a long career, Craig Hill is chiefly known for playing P.T. Moore (opposite Kenneth Tobey) on Whirlybirds, a long unseen 1957-60 TV series. With his icy blue eyes and reticent manner (see above), he'd seem better suited to cold, calculating villains. Hill gives the audience little reason to feel much sympathy for his character.

Elaine Edwards had a relatively minor film career, though she did play the ingénue in Curse of the Faceless Man (1958), another Kent/Cahn production, and also appears in The Bat (1959), with Vincent Price.

Probably the face most recognizable to viewers today is Willis Bouchey, a busy character actor specializing in authority figures and grandfatherly types. He was a semi-regular on Perry Mason, frequently turning up as a judge, but like that role his parts were generally small, day-player assignments. After watching You Have To Run Fast it's obvious why Bouchey rarely got bigger roles. As the philosophical, gun-loving if wheelchair-bound Korean War veteran, he really hams it up with broad, actorly gestures throughout, delivering innocuous lines like, "With ballistic missiles you have to be an astrophysicist!" as if he were doing Shakespeare in the Park. He sinks his teeth into two long monologues, the first about his love of guns ("If it hadn't been for this [his gun collection] I'd have cracked up years ago!") and later about his career-ending battlefield injury (where he was "saved by a young kid from the Ozarks!"). Bouchey's delivery here is unintentionally hilarious.

Also unintentionally funny is Grant Richards as the (overtly) symbolically named Craven. On the lam for ten months, he hides out in a crummy motel, nervously pacing about the room like a rat in a cage, screaming at his girlfriend. Richards's chubby physique and especially his mannerisms and facial expressions unavoidably, uncannily suggest Ralph Kramden on the verge of sending Alice to the moon.

Presented in 1.66:1 enhanced widescreen with very slight side mattes, You Have To Run Fast is a clean, crisp presentation of this black-and-white film, with only a couple of jarring pieces of film damage (including a torn frame) marring the show. The region 1 encoded DVD-R is also copy-protected, with decent Dolby Digital mono audio (English only), but with no subtitle options or Extra Features.

Strictly for fans of low-budget postwar genre films, You Have To Run Fast, for what it is, is actually fairly decent with better than adequate direction. For this demographic it's Recommended.