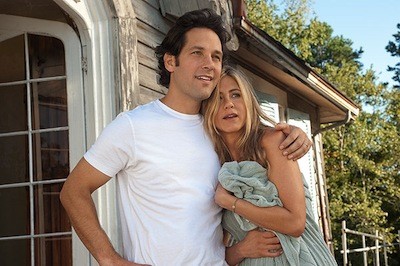 The new comedy Wanderlust stars Paul Rudd and Jennifer Aniston as George and Linda, a New York-based couple whose lives get turned upside down when George loses his job and Linda's documentary about penguins with testicular cancer gets turned down by HBO. Finding themselves broke with no prospects, the pair moves to Atlanta to live with George's jerky brother (Ken Marino). On the drive down, they discover an "intended community" (read: commune) that welcomes them with open arms. George digs the freedom the place offers, so much so that he convinces Linda to go back and settle down. Only, once they are there, the tables turn, and it's Linda who gets into the hippy groove.

Wanderlust is written by Marino and David Wain, former members of the comedy troupe the State. Wain also directs, as he did with the cult comedy Wet Hot American Summer. In some ways, Wanderlust plays as a grown-up sequel to their summer camp parody. This time the funny people act their age, but the scenario is no less ridiculous.

Justin Theroux is Seth, the defacto leader of the commune. The Jesus-bearded alpha hippy has taken over for the group's founder (Alan Alda), who still hangs around but has maybe burned a few too many brain cells since the 1970s. Seth takes a liking to Linda, who is lost enough in her own life to fall for his smooth talk. Likewise, the blonde bombshell Eva (Malin Akerman) wants to introduce George to the concept of free love. Other commune members include the spacey matriarch (Kerri Kenney), an oddly aggressive peacenik (Kathryn Hahn), and a nudist wine maker (Joe Lo Truglio) who also happens to be writing a novel about politics. All of these manage to confound George in some way, leading to his eventual split from his wife. There is also a side plot about a casino trying to steal the community land, which predictably sets up George's redemption. 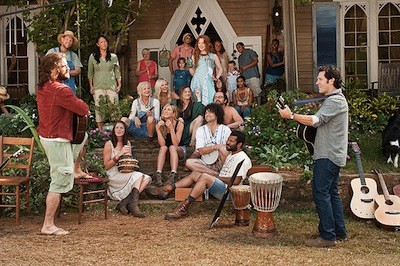 It's all rather silly, though not consistently funny. Luckily, when Wanderlust does hit, it hits big, drawing out large laughs with its absurd antics. All the cast is in fine form here. Kenney regularly steals scenes with her odd way of delivering her lines, and Six Feet Under-actress Lauren Ambrose surprises as a dopey pregnant woman. The scenes in Atlanta are some of the best. Marino kills it as George's sibling, a dickish manchild, and former SNL-er Michaela Watkins turns in a remarkably underplayed performance as his self-medicating wife.

Not surprisingly, it's Paul Rudd who turns out to be the real champ. The way his self-effacing grin morphs into bewilderment at all that is happening around him never fails to amuse or charm. Some of the biggest guffaws come when Wain, who also cast Rudd as the leading man in Role Models, lets him off his leash. Rudd's improvisations even make a tired bit like a dude psyching himself up in a mirror sparkle. Surprisingly, only Jennifer Aniston is underused. Linda comes off as underwritten and functionary, which sucks because the comedienne is usually so good as character work. Her freak-out on hallucinogenic tea is the clunkiest scene in the movie.

It's doubtful that Wanderlust will have the same legs in cult circles as Wet Hot American Summer. It's too patchy and ultimately too inconsequential. It's the kind of movie you see once and forget about. Still, I was entertained for the duration of its short running time. If you judge your comedies by the simple equation of how much they make you laugh, then Wanderlust is worth the ticket. 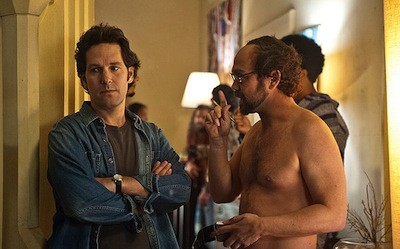