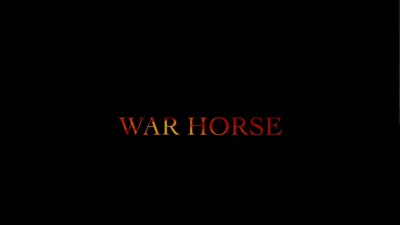 Despite its sweeping visuals and epic scale, Steven Spielberg's War Horse remains focused on its equine hero, Joey, as he travels throughout France and Germany during World War I. 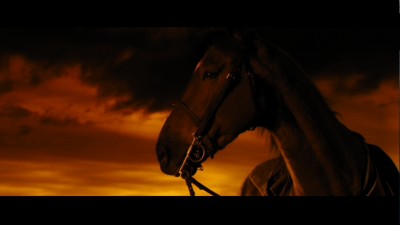 Adapted from Michael Morpurgo's children's novel, War Horse bounces between the characters and settings Joey encounters as a British Cavalry horse, and Spielberg captures the horrors and beauty of the period landscape. War Horse is classic filmmaking; dramatic and sentimental, with heartache and triumph for its characters. The toll of war on Europe is sometimes overlooked outside of a few startling scenes of violence, which dampers the film's resonance some, but War Horse supplements its narrative creaks with earnest storytelling.

Farmer Ted Narracott (Peter Mullan) buys a thoroughbred at auction despite being told the horse will never pull a plow. Ted's wife, Rose (Emily Watson), demands he return the horse, but his son, Albert (Jeremy Irvine), promises to train the horse, which he names Joey. Ted is haunted by memories of his time in South African during the Second Boer War, and turns to the bottle for relief, leaving Joey and Rose responsible for paying the rent. 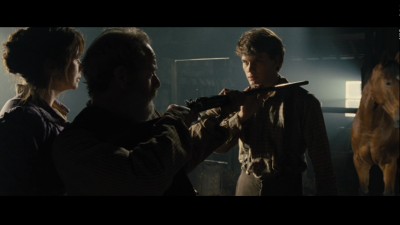 In a rousing early scene, Albert gets Joey to plow a rocky field and saves the family's farm from vindictive landlord Lyons (David Thewlis). The good luck eventually dries up, and Ted sells Joey to Calvary officer Capt. Nicholls (Tom Hiddleston), who promises to look after Joey and return him to Albert after the war.

Violence fills Joey's first months at war, as the British quickly learn their traditional battle charges are futile against a hail of machine-gun bullets. Although Joey cannot speak, War Horse follows the horse across Europe, where he meets soldiers and civilians alike. In the possession of German troops, Joey encounters young soldiers Gunther (David Kross) and Michael (Leonard Carow), who foolishly desert to save their lives. Joey meets fragile Emilie (Celine Buckens) and her grandfather (Niels Arestrup), who live on a farm near the German front. The story later moves forward several years, and Joey continues to suffer under the harsh German command. War Horse glimpses battle from many angles, and, while the big picture is never captured, it succeeds at portraying the hardship and loss of war at a personal level. 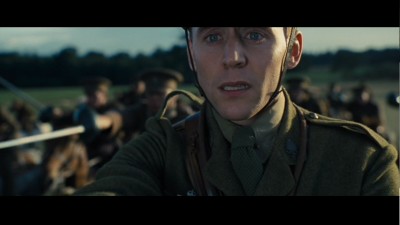 Spielberg released two very different films in 2011: Motion-capture animated film The Adventures of Tintin and War Horse, which received an Academy Award nomination for Best Picture. The Adventures of Tintin is breathless fun, but War Horse is more traditional filmmaking. Spielberg captures the landscape and frames the actors in beautiful mise-en-scène in a manner not seen since his Saving Private Ryan. Every shot is beautifully composed and framed, and film buffs should appreciate Spielberg's mastery of his craft. Albert eventually enlists and fights with the British in the Second Battle of the Somme, where soldiers hide from German guns and bombs in mud-soaked trenches. Albert enlisted for his country and for Joey, who he hopes to see again.

Before its film adaptation, Morpurgo's story was turned into a successful stage production that used life-sized puppets for the horses. The material is suited for that medium, which allows an audience to focus on the core story without demanding a visual depiction of all the surrounding events. As a film, War Horse is nimble and mostly satisfying, but at times lacks this context. War Horse is sad because a horse suffers greatly, yet millions of people died in World War I. Spielberg provides glimpses of the tragedy, but overlooks most of the fallout. After the first hour, Albert gets too little screen time to earn much sympathy, but Joey is the real hero anyway. Joey is the most charismatic and developed character in War Horse, and that makes the film a success. 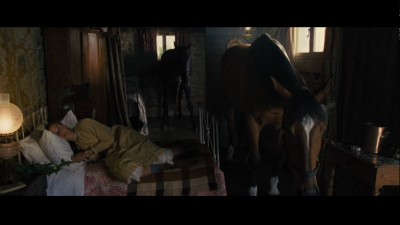 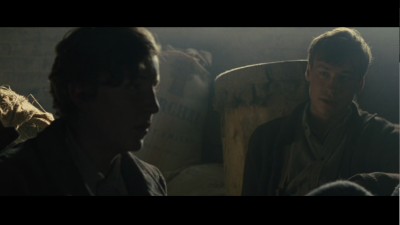 The 2.40:1/1080p/AVC-encoded transfer for War Horse complements Spielberg's sharp directorial eye and the beautiful cinematography from Janusz Kaminski. Detail is excellent, and Spielberg's frequent deep-focus shots stretch for miles. Close-ups reveal every facial detail, sweat bead and dried patch of mud on the tired soldiers, as well as Joey's chocolate coat. Colors are bold and lush, and rotate from the fertile greens and reds of rural France to the harsh grays and blacks of the German war zone. Blacks are solid and do not crush, and War Horse appears at all times film-like. No compression artifacts appear, and the only hiccup to report is some very slight aliasing.

The disc's 7.1 DTS-HD Master Audio soundtrack supports the thunderous chaos of war, with excellent range and dynamic clarity. Dialogue is crisp and clear, and directional dialogue is frequent. The 7.1 mix is immersive and expertly designed to place the viewer amid the environment on screen. Ambient effects surround the viewer, and action effects rumble throughout the sound field and awaken the subwoofer. Machine gun fire ricochets around the room, horses gallop and rattle the floor, and panicked voices pan through the rear and front speakers. This is an excellent mix, and the fantastic range means quiet scenes are just as powerful. A French 7.1 DTS-HD HR track and a Spanish 5.1 Dolby Digital track are also available, as are English SDH, French and Spanish subtitles. 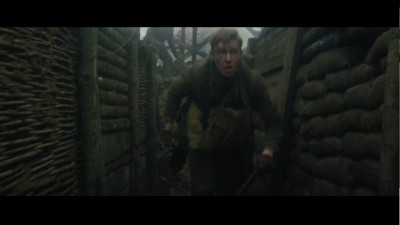 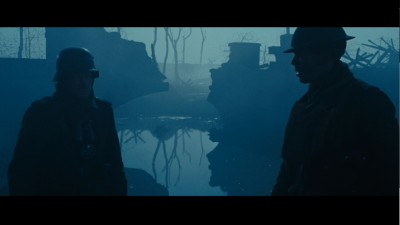 War Horse arrives on Blu-ray as a 4-disc "combo pack" from Touchstone. Disc 1 contains the film, Disc 2 holds the majority of the extras, Disc 3 is a DVD copy of War Horse, and Disc 4 contains an iTunes-compatible digital copy of the film. The thick Blu-ray case is wrapped in an attractive, textured slipcover. Spielberg and his filmmaking team are heavily featured in the set's extras, but, as usual, Spielberg does not provide a commentary. The disc also lacks interactive or picture-in-picture content, but the material included is thorough and interesting: 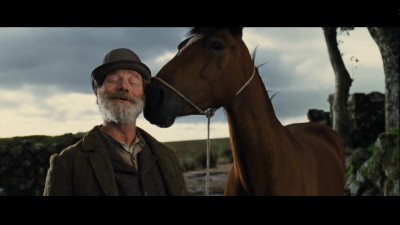 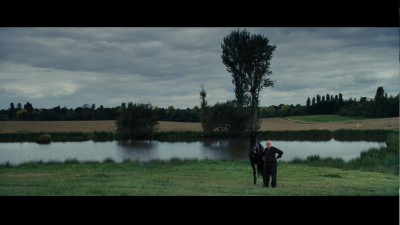 War Horse has old-fashioned sensibilities, but its equine hero's struggles under British and German leadership during World War I are timeless. Steven Spielberg shoots across Europe and captures the beauty and horrors of the war-torn landscape as war horse Joey bounces between various riders and strangers. War Horse occasionally misses the big picture and fallout of war, but its voiceless lead is a compelling protagonist. The Blu-ray features excellent picture and sound and some weighty extras. Highly Recommended.