You Can't Get Away With Murder

Soulful, well-acted gangster/prison combo from the mean streets of the Warner Bros.' lot. Warner Bros.' Archive Collection, the M.O.D. (manufactured on demand) service that puts out hard-to-find, library, and cult titles, has released You Can't Get Away With Murder, the 1939 action meller based on a play by real-life Sing Sing Penitentiary Warden Lewis E. Lawes, starring Humphrey Bogart, Gale Page, the Dead End Kids' Billy Halop, John Litel, and Henry Travers. Not as well known as some of Bogie's other gangster pics from this period (probably because he's really only a supporting player here to the excellent Billy Halop), You Can't Get Away With Murder's title doesn't leave a lot of room for speculation as to where all the criminals are going to wind up at the end of the movie, but as with so many of these Warner urban efforts from this period, it's fast-paced, exciting, and pleasantly reflective from time to time. An original trailer is included in this super-sharp remastered edition. 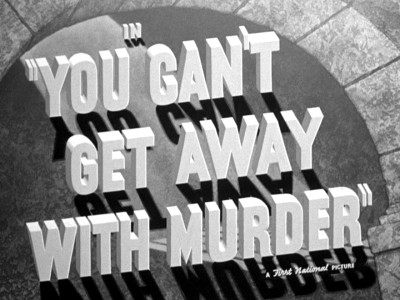 Teen punk Johnny Stone (Billy Halop) wants nothing to do with his pretty sister Madge's (Gale Page) fiancé, Fred Burke (Harvey Stephens). Good guy Fred, a private security agent, wants to marry Madge and take her to Boston where his boss has promised him a promotion and a raise. Fred's even willing to get surly Johnny a job there, too. But Johnny ain't havin' none of that, see; he thinks Fred is just shining him on to keep Madge sweet, and no hard-working goody-two shoes is going to make a mug outta him. To Johnny's way of thinking, local gangster Frank Wilson (Humphrey Bogart) has it all figured out. Having never served a day in jail, smooth, vicious criminal Frank feeds Johnny's anti-social beliefs (beliefs that Madge forgives, considering that's all Johnny ever experienced in the slums), eventually taking him under his wing one night to help him stick up a gas station. Now Johnny's got a fistful of cash and a new suit the "easy" way, and Madge is terrified at what will happen to her baby brother. But Johnny's got the fever, see, and he's going with Frank all the way. The only problem is, Frank isn't just a thief, he's a killer, too, and when Frank zaps a pawn shop owner, he plants Fred's gun―which Johnny stole and which Frank took away from the kid―on the body. Fred's arrested for murder, and then convicted, and Johnny's conscience begins to bother him, particularly when he sees how devastated Madge is at losing her husband. When Frank and Johnny are busted for the gas station stick-up, they wind up in the same prison where Fred is brought for execution, so now Johnny only has a few months to decide whether or not he's gonna squeal on Frank...with Frank trying to decide when's the best time to off his unsteady, dangerous pupil in crime. 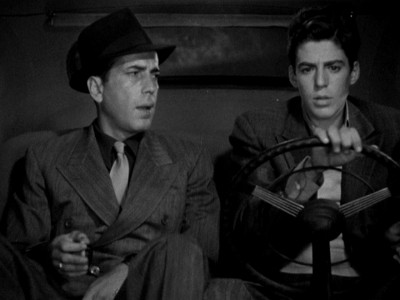 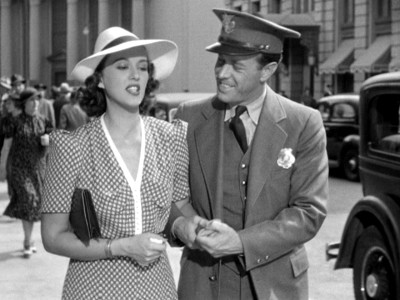 It's been years since I last saw You Can't Get Away With Murder (I'll bet the last time was on Bill Kennedy at the Movies!), but I was surprised at how much of it came back to me, and how well it played today, despite less-than-glowing reviews (then and now). Anyone who grew up on these Warner Bros. crime mellers will immediately recognize the conventions of their house style: the quick, fast cutting (accompanied by the blaring, dramatic music cues); the then-up to date colloquialisms and slang; the evocative chiaroscuro lighting, the grimy, realistic sets; the threat of sudden violence simmering below the surface of a topical, punchy social subject (the threat to slum teens from charismatic gangsterism here). No one did these kinds of movies better than Warner Bros. (just as nobody did better musicals at the time than M-G-M, nor horror pictures better than Universal, nor comedies better than Paramount), and while You Can't Get Away With Murder is rarely if at all mentioned as a notable Bogart picture―let alone an important example of the gangster or prison genre―it's consistently entertaining in that assured, ultra-professional (and perhaps just a tad "anonymous") studio/factory way of filmmaking from this period. 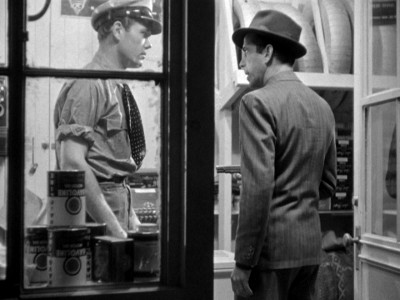 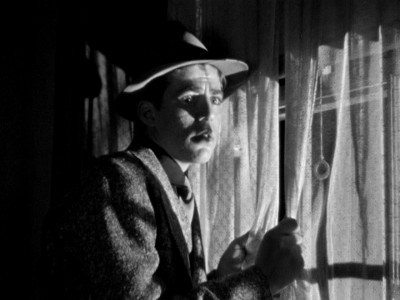 Journeyman director (and that's not an insult in my book) Lewis Seiler had already twice worked with Warner Bros.' new acquisition, The Dead End Kids, in Crime School and Hell's Kitchen...right before Warners dropped their option (either reported hijinks on the lot or nervousness about their sustained popularity, as I've read it). So Seiler was attuned to working with the talented Billy Halop (as were co-stars Bogart and Gale Page, who also starred with the Broadway sensations in separate projects, including Crime School and the classic Angles With Dirty Faces). Based on a play co-written by former Sing Sing Penitentiary Warden Lewis E. Lawes (he apparently was famous enough for his picture to featured in the movie's trailer), You Can't Get Away With Murder's team of scripters, Robert Buckner (Yankee Doodle Dandy, Santa Fe Trail, Dodge City, Knute Rockne, All-American), Don Ryan (Smart Blonde, Devil's Island), and Kenneth Gamet (the Nancy Drew series, Wake of the Red Witch, Flying Leathernecks)―and any other anonymous scribes not credited in the end―stay true to the Warner crime meller formula here, juicing up its ripped-from-the-headlines story with bursts of violence and snappy dialogue, throwing out some Depression-era populist grumblings about Wall Street as well as some sociological "nature/nurture" musings before dispatching the guilty with Production Code-approved Old Testament morality. 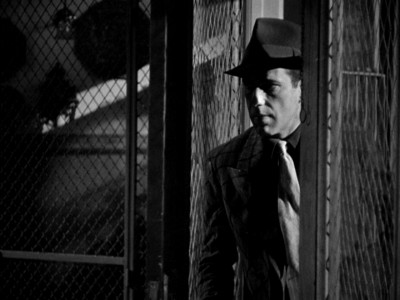 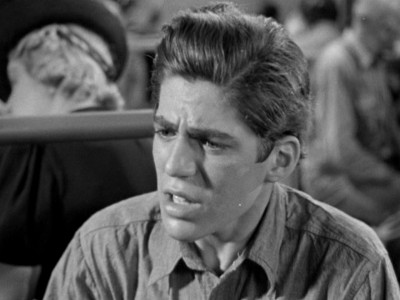 Indeed, the Code may have been firmly in place by 1939, but the screenwriters of these studio efforts could always find some way to slip in something racy, such as department store worker Madge's friend, Peg (Gertrude Short), alluding to her boss' pick-up line at the Underwear Department: "I told him, 'There ain't nothing you can tell me about B.V.D.s'" (you could also have a lot of fun in a term paper making a case for the veiled push-me/pull-you homosexual triangle that the scripters ever-so-slightly hint at with Bogie, Halop and Henry Travers). The rest of You Can't Get Away With Murder sticks pretty closely to Warner's formula for this time, from the occasional heavy-handed symbolism for the female viewers watching (shopgirl Madge works in the luggage department...and wants to escape to anywhere, yearning for the suburban good life that Fred can give her), to then-popular sociological "nurture" excuses about criminal behavior patterns that the liberal Warner Bros. frequently embraced in these crime mellers (Madge defends Johnny gravitating towards Frank because all he's ever known in his life is "poverty, cheapness, and gangs"). But this is 1930s liberalism, not today's brand, and Johnny's sneering rejection of working hard to get ahead and the ethos of "try, try again"-ism, is going to land his ass in trouble fast. 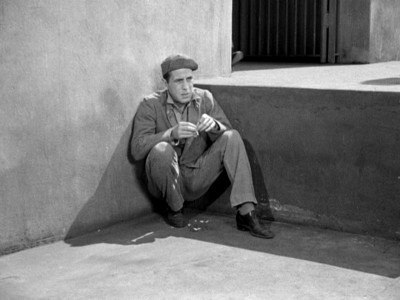 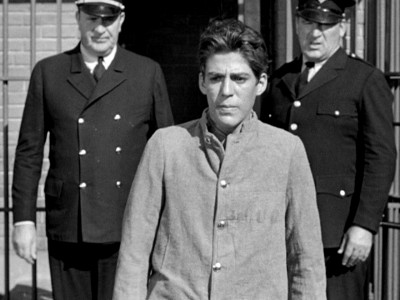 Bogie's cocksure gangster Frank is set-up to be admired by the audience just as Robinson's Little Caesar and Cagney's Public Enemy were at the beginning of the decade (with his top billing, we expect Bogie to run this show). He's the new kind of "smart hood," apparently, who sees crime as a business first, with government statistics about likelihood of getting caught, and likelihood of getting convicted, used to convince Johnny that crime indeed does pay if you bet on the percentages. He pays his taxes to throw the Feds off his scent, and his "all it takes is brains and nerve" motto puts the emphasis first on strategy and cunning (which he shows when in a flash, he plants Fred's gun on the murdered pawn store owner's body, simultaneously letting himself off the hook and fingering Fred, who Frank swore he would get even with for slapping the gangster). And just for good measure, he throws in a moral justification equivalency about Wall Street bankers "having their hands in everyone's pockets," to seal the deal with pissed-off Depression audiences. Yet almost immediately, the scripters take Bogie's seemingly Robin Hood-ish populist gangster and show him up for his true colors: a vicious, amoral killer who will hound and ride Johnny to keep his secret safe...and then polish him, too, when it's expedient. 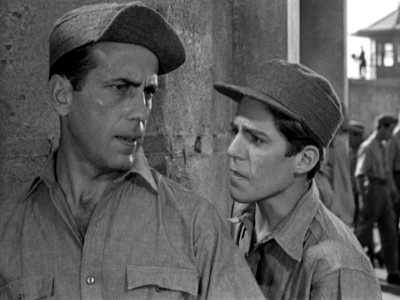 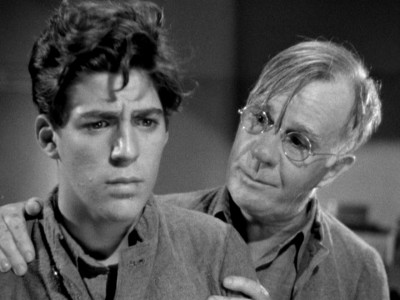 When You Can't Get Away With Murder switches allegiance to Johnny, the movie because quite reflective and soulful...for a Warner's gangster/prison "B," with a genuine amount of suspense―both cinematic and moral―generated as we watch Johnny gradually lose his nut trying to justify his silence that will kill the wrongfully accused Fred in the electric chair. There are numerous scenes with Halop where the moral implications of his silence are debated, and pushed, and thrown back at his confessors, with director Seiler going in tight on Halop as he struggles with his impossible dilemma: rat out Bogie and become an accessory to murder (dead either by a "stream of electric juice" or a shiv from Bogie), or let Fred fry for a murder he didn't commit...and live with the guilt that he destroyed not only Fred, but his sister's life, too. A big surprise for me was how well Halop comes over in these scenes. It's an intense portrayal of anguished indecision and moral vacillation and it's surprisingly varied, technically. 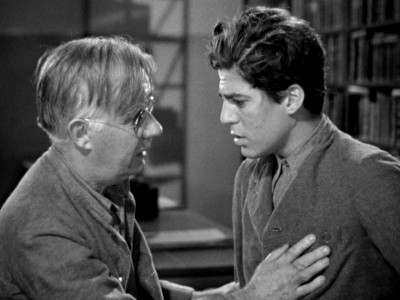 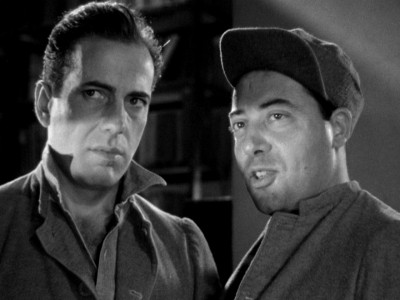 As for Bogie, he's excellent, as well, playing a gangster yet again who shows absolutely no remorse for the killing he's done...or the killings he's planning (he appeared four times as a gangster in 1939 alone...and he certainly wasn't happy about it at this point in his career). You Can't Get Away With Murder was one of seven films Bogart had in release for 1939 (another gripe he had: his sausage-grinder shooting schedules), when Warners was throwing him as a supporting player into anything they had on their production roster, including his only (improbable) ventures into the Western and horror genre―The Oklahoma Kid and The Return of Doctor X―that same year, too. It would take another two years of slogging through B-supporting roles before he landed the one-two leading man punch of High Sierra and The Maltese Falcon in 1941, permanently elevating him into Hollywood's top star ranks. That's when the Bogie we now know best came into being―the wounded, cynical, romantic anti-hero hiding his idealism deep down inside himself―but I must say I have a fondness, too, for the earlier Bogie of films like You Can't Get Away With Murder, where his clipped, nasty shorthand for the violent, amoral killers he portrayed matched up perfectly with the frameworks of the fast-paced, exciting B-programmers routinely churned out by Warners. 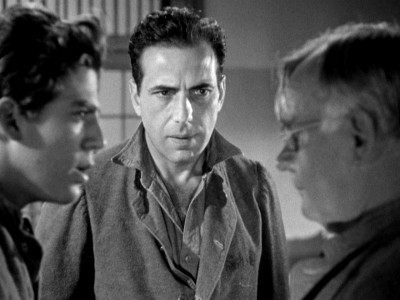 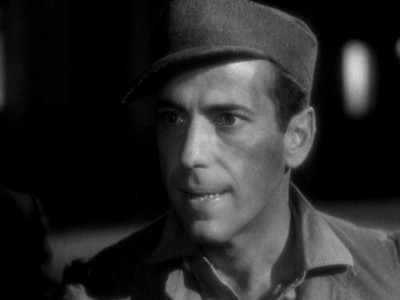 The Video:
The full-frame, 1.37:1 black and white transfer for You Can't Get Away With Murder looks quite clean in this "remastered" edition, with creamy blacks and whites, minor grain, and a few scratches. Check out the trailer to see how the prints of this title used to look when they showed in on TV when I was a kid.

The Audio:
The Dolby Digital English mono audio track is also pretty clean. Hiss is present, and expected, but not obtrusive. No subtitles or closed-captions are available.

The Extras:
An original trailer for You Can't Get Away With Murder is included, cut in that inimitable, jazzy Warner style.

Final Thoughts:
Typical slam-bang Warner Bros. gangster/prison meller...but with a decidedly reflective, moody undercurrent. Humphrey Bogart may be top-billed, but his usual skill at portraying an amoral psychotic killer takes a supporting player backseat to Dead End Kid Billy Halop's excellent portrayal of a punk kid tortured by a life-and-death decision. "B" moviemaking at its most efficient...and effective. I'm highly recommending You Can't Get Away With Murder.