MGM // Unrated // December 23, 2011
List Price: $19.98 [Buy now and save at Amazon]
Review by Stuart Galbraith IV | posted February 25, 2012 | E-mail the Author
The story goes that Jungle Heat (1957) was shot in Hawaii immediately after Voodoo Island (1957), another Bel-Air production executive produced by Aubrey Schenck and Howard W. Koch, the latter serving as this film's director. Like Voodoo Island, a dull picture top-lining Boris Karloff, Jungle Heat has an interesting cast (actor Rhodes Reason appears in both, in fact) and Kauai, Hawaii locations but otherwise is quite lackluster. Characters mull about, talking to one another, but the story never seems to be going anywhere. With its undercurrent of Japanese fifth columnists threatening plantation owners in the days prior to Pearl Harbor, Jungle Heat at first seems promising but overall it's very disappointing.

A "Limited Edition Collection" manufactured-on-demand title from MGM, Jungle Heat sources an old, old transfer, complete with '80s era UA logo, that's 1.37:1 full-frame when it should be 16:9 enhanced widescreen. The transfer is as lackluster as the movie. No extras. 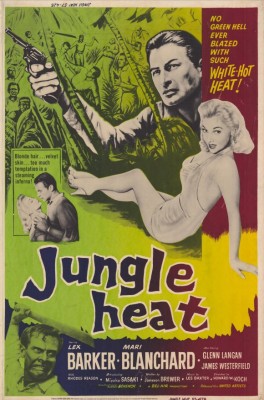 Labor relations negotiator Roger McRae (Glenn Langan, The Amazing Colossal Man himself) and his wife, Ann (Mari Blanchard, the Queen of Venus in Abbott & Costello Go to Mars) arrive in Hawaii in late-1941 to address a series of disruptions and accidents plaguing area sugar plantations. At the harbor they meet Dr. Jim Ransom (Lex Barker, late of RKO's Tarzan series), who blames the problems on Japanese fifth columnists. Indeed, Roger and Ann are nearly crushed under a pile of wooden pallets that suspiciously collapses near them. Later Jim's car is sabotaged and the three are tailed into the jungle and nearly bumped off.

Racist Roger, however, dismisses Jim's theory about Japanese terrorists, insisting instead that the perpetrators are local islanders, whom he likens to sub-human animals that need to be ruled with an iron fist. The only plantation owner whose crops haven't been sabotaged, Harvey Mathews (James Westerfield), agrees with Roger, insisting Filipino activist Felix Agung (Glenn Dixon, who doesn't remotely look Filipino) is behind it all, representing workers demanding better pay and housing. There's an explosion at a sugar-processing plant, and Roger shows his true colors to Ann, expressing more concern about the plant's damage than the severely burned victims lying at his feet. Ann, a former nurse, stays behind to help Dr. Ransom, and later they visit the home of U.S. Army Maj. Richard Grey (Rhodes Reason), who lives pseudo-Japanese style with his wife, Kimi-chan (Miyoko Sasaki).

Jungle Heat is a low-budget mishmash of bigger and better films. Its illicit pre-Pearl Harbor romance (between Barker and Blanchard's characters) recalls From Here to Eternity (1953), one of the biggest hits of the early 1950s. The interracial marriage of Maj. Grey and Kimi-chan (she's never called anything else) is much like the star-crossed romances of William Holden and Jennifer Jones in Love Is a Many-Splendored Thing (1955) and especially Marlon Brando's army major and Miiko Taka's traditional Japanese woman in Sayonara (1957). (That film was actually released later in the year, but was heavily publicized throughout 1957, and was based on a bestselling novel from 1954.) Even the vaguely union-busting subplot seems lifted from On the Waterfront (1954), which featured James Westerfield in a similarly slippery, villainous part.

The screenplay by Jameson Brewer never comes anywhere close to tying all these disparate elements into a coherent, cohesive whole, and all attempts at irony are painfully overdone. Once everything is happily resolved, Jim and Ann frolic on the beach. It's a clear Sunday morning in December and all is right with the world, despite the buzzing of a squadron of unseen planes flying overhead. In case anyone missed it, there's a cut to the words "December 7, 1941" written in the sand.

Though cast with hungry actors that, for the most part, had been cut loose from the security of long-term studio contracts, it's still an impressive line-up for a low-budget movie. Langan is convincingly overwrought and hateful as Roger, while Westerfield, sweating profusely throughout, has an oily, worldly charm about him, suggesting a fat, bald John Huston. Even Rhodes Reason, usually pretty stiff in parts like this one, is relaxed and moderately interesting.

The Hawaii locations, some of which closely resemble those found in Voodoo Island, don't use the island scenery as well as they might. It doesn't look all that different from Hollywood movies shot in the L.A. County Arboretum. Conversely, Les Barker's musical score is very good for a cheap film; this reviewer generally doesn't much care for Baxter's later film scores for Roger Corman and AIP, but this one is admirably evocative.

Presented full-frame when it should be 16:9 enhanced widescreen, Jungle Heat is stuck with a singularly blah, ancient video transfer lacking in detail and contrast. The Dolby Digital mono audio (English only) with no subtitle options is also sub-par; the audio is downright bad during the final minutes and hard to make out. The disc is region 1 encoded and copy-protected, with no Extra Features.

Schenck and Koch collaborated on a few interesting features (T-Men, The Black Sleep) but this ain't one of them, and the mediocre transfer makes this even less inviting. Rent It.