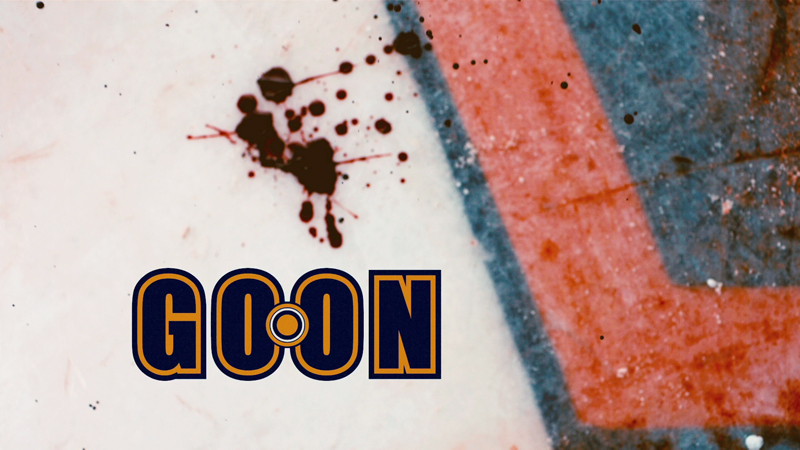 
The Movie
Though I understand some of the reasons why hockey is relegated to niche status among the major American sports, including the expense and difficulty of participating and the fact that it doesn't translate wonderfully to TV, but I'll never accept it. Between hockey, football, basketball and baseball, nothing is harder to play, features more skill, plays at a higher pace or features better athletes than hockey. Take a look at articles following a hockey playoff series that reveal how many players have injuries requiring surgery that they played through in order to win. Watch the handshake line at the end of a hockey playoff series, and observe the respect shared between two teams who were bitter rivals just minutes earlier. There's a beauty and honor in hockey that's just not there in those other sports.

However, there's something else in hockey that's helped keep its gladiators in the shadows of the beer-swilling baseball players, showboating basketball players and the football players who play for less than 11 minutes in the course of a game. That's the violence, specifically the fighting, which is ingrained in the pro game, whether there are penalties or not. Football may be turning people away from playing the sport with its violence, but hockey's fist fights and cheap shots make sponsors nervous and casual fans turn away from the screen. For much of the sports era there has been the enforcer, a player whose key (and in many cases only) role is to fight. And that's the kind of player Doug Glatt is.

Son and brother to doctors, Doug (Seann William Scott) isn't quite as accomplished, earning a living as a bouncer after a failed attempt at being a boxer. However, accompanying his loudmouth pal Ryan (writer Jay Baruchel) to a semi-pro hockey game one night puts him in the role of protector when heckling leads a player out of the penalty box and into the stands. Doug's brutal beat-down of the player catches the opposing team's eye, and Doug receives a try-out to be the downtrodden squad's enforcer. Doug can't skate, doesn't know the game and is generally not too bright, but he's tough, doesn't know the word quit and lives to defend people. As a result, he takes to the role quickly, and soon he gets the call to fill a similar role in the minor leagues, acting as the Halifax Highlanders' guardian to a hot-shot rookie named LaFlamme, whose career has come crashing down since suffering a concussion on a big hit. 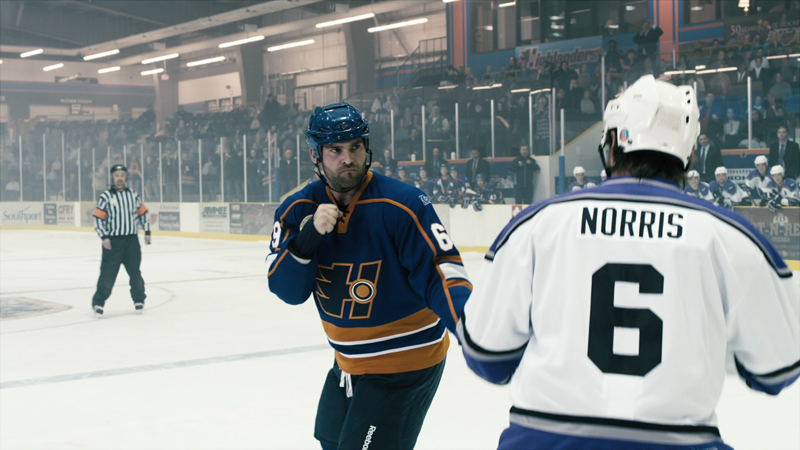 LaFlamme (Marc-André Grondin) is a drug-addled punk though, which doesn't make Doug's job easy, and the team is not too great, made up of a motley crew of arrogant Russians, depressed veterans, a happy-to-be-here follower and a goalie with a wide assortment of issues. There are other problems for Doug as well, like a girl who likes him (Alison Pill, Scott Pilgrim vs. The World) but is in several relationships, an enforcing legend (Liev Schreiber) waiting for their chance to finally do battle and parents (one played by Eugene Levy) who are still unapproving of his new-found purpose. Fortunately for him, his positivity (enhanced by his lack of intelligence) and his increasing success on the ice keeps him from getting down, even if, at times, he wants to be something more than "Doug the Thug."

As "The Thug," Scott does a great job of portraying a simple, yet admirable man (though some might say, based on past roles, the simple part is right in his wheelhouse.) The role has some nice depth to it though, as Doug isn't just a lunkhead, but a proud defender (played up through the presence of his gay brother) and loyal friend looking for somewhere to belong. He also gets some of the funniest lines in the movie, including a classic reaction to an upset Pill. Positioning Doug as the inevitable adversary and successor to Schreiber's iconic fighter, and having Schreiber fully accept that as the way things work was perfect crafting by Baruchel and his collaborators along with director Michael Dowse, as it made Schreiber more of a complex villain than he might otherwise have been, and built up to a hugely satisfying climax, even if it's one of the most brutal in sports-film history.

Dowse did a fine job of raising the bar for sports films, balancing on and off-ice action, while trying new ways to film the game that capture the speed and energy of hockey (while thankfully ignoring the temptation to overdo it.) He's aided by an absolutely terrific cast, led by Scott, Baruchel (who is awfully good at playing a wicked Mass-hole), Pill and Schreiber (who was made to play a hockey tough-guy in the twilight of his career.) As the coach of the Highlanders, Kim Coates adds yet more evidence as to why he should be considered one of the most underrated actors working today, while Grondin is excellent as the egotistical Laflamme. The rest of the team is filled with memorable performances, including Ricky Mabe's wannabe leader. There's a whole lot to like about this movie, whether you like the game or not. 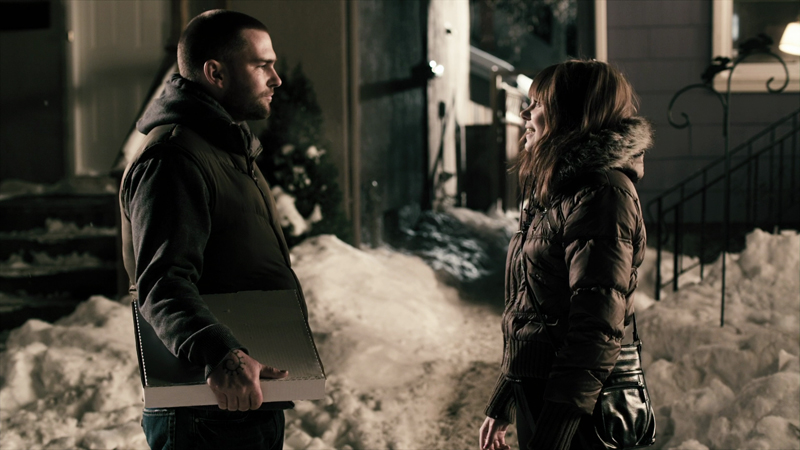 The Disc
This film arrives on a Blu-Ray in a standard Blu keepcase with a slipcover that repeats the cover art. The disc includes options to watch the film, select scenes, adjust the languages and check out the extras. There are no audio options, but subtitles are available in English SDH and Spanish. The movie is also available in a combo pack with a DVD and digital copy.

The Quality
The 1080p, AVC-encoded transfer looks great, capturing the details inside the arena and around the area crisply. The level of fine detail is very high, letting all the cuts and scrapes on Doug show clearly (to a disgusting degree at points), and making the scenes with snow falling gorgeous, though the clarity can make some of the CGI pop more than it positively should. The color is pretty spot-on (surprisingly, the rinks are pretty well-lit, skipping more dramatic shadows) while the black levels are nice and deep, though there is a spot of excessive noise during the darker night scenes.

The DTS-HD Master Audio 5.1 soundtrack is up to the task of recreating a high-energy sports film, delivering the sounds of the on-ice action strongly, filling the surrounds with the crowd and atmospere, while offering up some nice directional effects in-game. When not in the arena, the dialogue is clean and clear, and the score and soundtrack gets back-up from the side and rear speakers. The final thrust of the film, starting with a blast of bagpipe music, is a soundstravaganza, from the dramatic score and soundtrack to the graphic sound effects.

The Extras
The first big extra is Power Play Mode, which, when activated, puts icons on the screen throughout the film, with an accompanying slapshot sound. Press enter when the icon is on-screen and you'll access a related bit of behind-the-scenes footage, including interviews, alternate takes and behind-the-camera clips. There are 40 entries in all, totaling about 45 minutes in all. Anyone interested in how the sausage is made will want to see the unpolished footage, including the production effort (like building a fake crowd and filming choreographed hockey action) and the faking on the part of the actors, while there are some interesting notes in the interviews (the alternate takes are a bit weaker, as is their nature.) The only annoying thing is some of the clips are extremely short, making it hardly worth the effort to interrupt the film. Fortunately, you can choose to just watch these clips on their own in a big pile.

For more behind-the-scenes info, there's a commentary from Baruchel and Dowse, which carries the tone of the film to the recording booth, making for a fun, loose track. The duo points out details and "secrets" from the set (like the real hockey plays and players the film's based on) and generally have a good time talking about the movie, hockey and why you give hockey players last names with only four letters. It's definitely a good time, though if you like hockey, it's about 100 times better (and if you like Canada you can make that 1000 times.) Plus, massive respect for Dowse for barely veiling his distaste for one of his actors.

There are six deleted scenes, which run about nine minutes long, and can be viewed in one pile or individually. None of them really were needed in the film, as they tend to explain things that you could figure out on your own, and they served only to extend the film. There's more cut footage in the 5:36 outtakes/bloopers reel, which has a few funny moments, including some silliness from one of the Russians, but it's mostly Scott messing up and alternate fight scenes.

If you didn't get enough of Baruchel on the commentary, there's more of him and Scott in an extensive sit-down running nearly half an hour (some of these clips were however re-used in Power Play Mode.) While Scott throws in a few thoughts about the production, it's mostly Baruchel running things, talking about everything from the sport of hockey, his youth in Toronto as a Habs fans, the actors in the film, and the motivation and thought that went into the script. It's a pretty impressive bit of background for looking at the film, as Baruchel shows himself to be a legitimately thoughtful writer.

"HDNet: A Look at Goon" (4:54) is your usual TV promo for the film, mixing footage and interviews, while "Fighting 101" (3:48) is a viral promo for the film, with Baruchel in character, talking about hockey fighting. The clip-fest them continues with "Goalie Auditions" 5:20 of Jonathan Cherry performing scenes from the film in a speedo, in an attempt to win the role of the Highlanders' netminder.

Wrapping things up are a set of Goon hockey cards, with details on the main cast's characters, though because you can't zoom in on the cards, they are hard to read. There's also two trailers for the film, one red-band and one green-band, as well as previews for an assortment of other Magnolia releases. 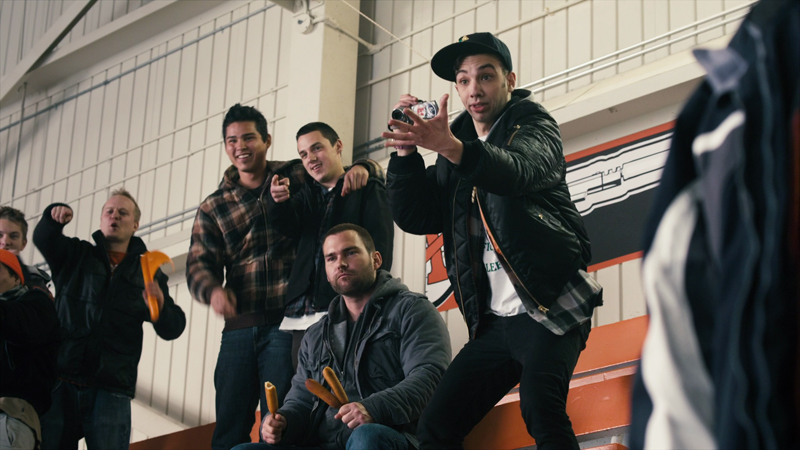 The Bottom Line
Admittedly, I'm a hardcore hockey fan who will track down a feed of an early-morning IIHF Slovakia vs. Switzerland Under-18 match-up to watch it live, but this is a genuinely enjoyable film loaded with great performances that does not require a love of hockey to truly appreciate it. All you need to care about is the appeal of the underdog and the desire to find your place in life. The disc looks and sounds great, and boasts some really solid extras, which makes it a release any sports-movie fan needs to own and anyone else should definitely check out.