MGM // Unrated // December 6, 2011
List Price: $19.98 [Buy now and save at Amazon]
Review by Stuart Galbraith IV | posted February 26, 2012 | E-mail the Author
An efficient little thriller from the team of producer Robert E. Kent, writer Orville Hampton, and director Edward L. Cahn (see You Have to Run Fast), Three Came to Kill (1960) offers a tautly-told, intriguing little story perfectly suited to its limited budget. Though a bit flamboyant, Cameron Mitchell is excellent in the leading role, and like other Kent/Hampton/Cahn collaborations the climax is violent and action-packed.

A "Limited Edition Collection" manufactured-on-demand title from MGM, Three Came to Kill sources what seems to be a comparatively recent transfer but it's in the wrong aspect ratio, 1.33:1 full frame when it should be 1.66:1 enhanced widescreen. Fortunately, unlike, say, MGM's concurrent (and also full-frame) Jungle Heat), Three Came to Kill reformats to 1.78:1 reasonably well. The picture remains reasonably sharp zoomed in though the cropping is a bit tight here and there. No extras. 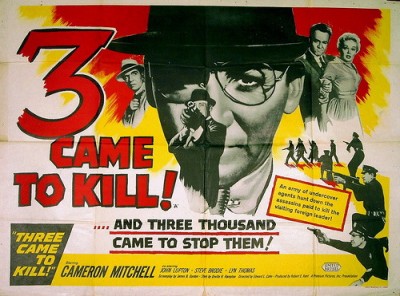 In a back alley behind the UN, assassins-for-hire Marty Brill (Mitchell) and Dave Harris (Steve Brodie) gun down Ram Singh (Shep Sanders), an interpreter representing a Middle Eastern country. However, Singh survives long enough to inform government agents about a plot to assassinate ousted premier Gourem-Nara (Frank Lackteen), "the Iron Sheep," sometime after his arrival in Los Angeles.* The agents plan to quietly slip him out of the country and back to his native land on a 4:40pm flight. (In contrast to today's Arab Spring, in this story the United States supports the hardline regime and opposes the rebel insurgents.)

Brill, however, cognizant of the high security around LAX, already has a plan to kill the premier as his flight takes off. Working with rebel Ipara (Jan Arvan), they invade the home of air traffic controller Hal Parker (John Lupton), whose house lies adjacent to the airport with a clear view of the runways.

(This unobstructed view, achieved via rear-projection, is a little too good to be believed. I once lived in an apartment several miles south of Burbank Airport, which rattled noisily every time a plane flew over to land or takeoff. The rear-screen shots suggest Parker's home is practically on the runway and yet no airport noise is heard at all.)

Wisely, Three Came to Kill confines its story to what was possible with its limited (probably around $100,000) budget. Indeed, it appears to be an almost duplicate copy of the Kent-Hampton-Cahn Inside the Mafia (1959), which had been shot under the working title "Three Came to Kill." Also starring Cameron Mitchell, it too opens with a botched killing and revolves around the takeover of an air traffic controller's house to facilitate an assassination attempt at an adjacent landing strip. (Bizarrely, notes about Inside the Mafia at the Turner Classic Movies Database insist, "The film does not bear any plot resemblances...but does share some of the same cast and crew." Really? I've not seen it. (Hampton is credited with the screenplay to Inside the Mafia but only the story for Three Came to Kill, which would seem to support the theory that the latter is based on the former.)

Of course, the basic plot goes back even further, notably the Frank Sinatra film Suddenly (1954), also about the takeover of a home for the purposes of an attempted assassination; and Desperate Hours (1955), the high-profile home invasion thriller with Humphrey Bogart and Frederic March.

Regardless, Three Came to Kill works on its own level - despite some painfully unnecessary, redundant narration - in no small way because of Cameron Mitchell's confident, smooth performance as Marty Brill. He'd been under contract to 20th Century-Fox earlier in the decade, in very high-profile pictures like How to Marry a Millionaire and Garden of Evil, but playing generally uninteresting parts. He did a lot of television after that, including starring for a single season on The Beachcomber, then in the early 1960s fled to Europe, where he enjoyed meatier roles, including a happy association with Italian director Mario Bava. After that, he seemed to take any and all work offered him, and eventually he developed a reputation similar to character actor John Carradine for appearing in some of the best and many of the worst movies ever made. Mitchell, however, often rose well above the least promising material, while Carradine usually sunk to its level.

In Three Came to Kill, Mitchell's immoral killer is made all the more cold-blooded by his relaxed performance, a nice contrast to his on-edge captives. There's a genuinely memorable scene where Parker's wife (Lyn Thomas) explains that her husband had been a pilot, but gave it up after a crash landing where he had to choose between colliding with a small plane that had wandered onto the runway, or climb suddenly and risk the lives of the 70 passengers on board. This and another scene involving Agent Maguire, wounded and taken hostage by Marty (he takes too many hostages; by the end it's like the stateroom scene in A Night at the Opera) offer an interesting look at the killer, who briefly lets down his guard to express a childlike fascination with moral quandaries that he regards with a much simpler perspective. It's a dedicated performance for a cheap movie; no wonder Mitchell was in constant demand for decades. (His dedication is also apparent in one scene where he roughs up Lyn Thomas. Mitchell really slaps her around.)

Presented full-frame when it should be 16:9 enhanced 1.66:1 widescreen, Three Came to Kill gets an otherwise okay transfer (see above). The Dolby Digital mono audio (English only) is likewise adequate, with no subtitle options. The disc is region 1 encoded and copy-protected, with no Extra Features.

Fans of modest B-pictures should enjoy this. It tells a compelling, compact story well, and star Cameron Mitchell's performance is memorable. Recommended.