MGM // Unrated // December 5, 2011
List Price: $19.98 [Buy now and save at Amazon]
Review by Stuart Galbraith IV | posted February 28, 2012 | E-mail the Author
A mostly tepid courtroom meller starring and directed by Ray Milland, Hostile Witness (1968), based on a play, lacks flair and is unimaginatively cast. It's not terrible and has its moments, but Billy Wilder's Witness for the Prosecution or your average episode of Rumpole of the Bailey is a lot more fun. 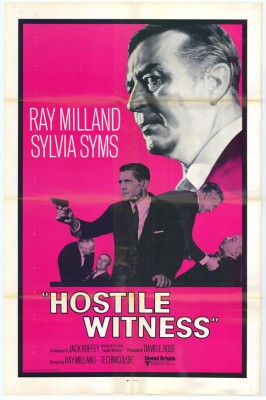 Simon Crawford, Q.C. (Milland) is a successful barrister at the Old Bailey. A widower who lost his wife during the Blitz, he's cared for their only child, a daughter, since she was two. More tragedy strikes when Crawford's daughter is killed in a hit-and-run accident, and Crawford's grief leads to a complete mental breakdown.

Three months later, shortly after returning to work he's knocked unconscious by an unknown assailant, who apparently uses Crawford's keys to break into the home of his neighbor and former mentor, Justice Matthew Gregory (Percy Marmont) and stab him to death. Around this time, Crawford receives a letter containing only blank pages, but later police discover that the envelope now contains correspondence from an alleged private detective, claiming to have identified Justice Gregory as the driver of the car that struck Crawford's daughter.

Police, now believing Crawford murdered Gregory out of revenge, arrest him. He turns to his own chambers for help, enlisting junior barrister Shelia Larkin (Sylvia Syms), his longtime but frustrated pupil, to defend him in court, with support from solicitor Hamish Gillespie (Ewan Roberts), and chief and junior clerks Charles (Norman Barrs) and Percy (Julian Holloway).

Hostile Witness began as a play by Jack Roffey (creator of the long-running British television series Boyd Q.C.). Milland starred in the Broadway production, which ran a modest 156 performances, but the actor took it on the road with some success, and then oversaw the movie version, with Roffey adapting his own play.

Milland had directed both feature films and television productions beginning with A Man Alone (1955), a Western, and probably his best film overall as a director. Today he's remembered as well for Panic in Year Zero! (1962), a post-apocalyptic thriller in which he also starred. Despite some obvious concessions to box office demands and screwy ideas about rebuilding civilization after global nuclear war, that film remains exciting and intriguing, if dated, and Milland's autocratic characterization is memorable.

He's less impressive and more indulgent in Hostile Witness. As he often was in his later films, he comes off as alternately irritable and unattractively smug. As an actor, Milland is at his best reacting silently to events beyond his control, at his worst barking orders and grouchily denying the charges against him. (Crawford and the movie generally are notably lacking in humor, the antithesis of Wilder's film.)

Crawford is supposed to be emotionally aloof, Milland's forte in some respects, but what the film really needs is at least some sign of Crawford's vulnerability, or believably expressed grief at his daughter's tragic death, neither of which Milland delivers.

Syms, as Crawford's star pupil, likewise is good in scenes where her character appears strong and confident but when she's frustrated or overwhelmed with self-doubt she's not really up to the task.

The supporting cast of Hostile Witness is similarly hit-and-miss. Felix Aylmer is fine as the old judge, and Raymond Huntley is excellent as the prosecuting barrister, but Geoffrey Lumsden is unmemorable as Crawford's befuddled, Nigel Bruce-like friend, Major Hugh Maitland, and Norman Barrs, also in the Broadway production, makes little impression as Charles Milburn.

Presented in 1.78:1 enhanced widescreen, the film elements sourced for Hostile Witness are more than a bit dirty but overall it's an adequate transfer with decent sharpness and reasonably true color. The region 1 encoded disc also offers good Dolby Digital mono audio, English only with no alternate language or subtitle options. No Extra Features.

Early Warner Archive and Columbia Classics MOD titles initially featured drab DVD cover art that soon gave way to much livelier designs, often based on direct reproductions of the original 1-sheet poster. MGM's MOD titles have been singularly ugly and/or inapt. Hostile Witness's is particularly unfortunate: the cover - Don't look now! - all too clearly gives away the identity of the murderer.

In this case, however, the fault is not entirely MGM's. It's based on the original poster art (See above...no, wait! Don't see above!), obviously created by United Artists' less-than-enthused publicity department. Still, even with the puny budgets they have to work with, I wish MGM would show more imagination in this regard.

Tepidly amusing but not much else, Hostile Witness is for insatiable fans of courtroom melodramas and Ray Milland completists. For them, it's moderately Recommended.