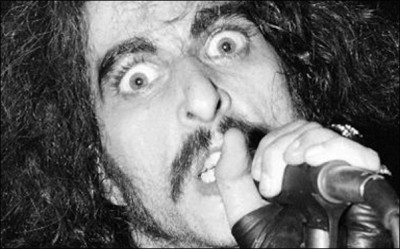 Bobby Liebling, the heavy metal almost-star at the center of Don Argott and Demian Fenton's documentary Last Days Here, cuts a tragic figure right away, in the picture's opening moments. Going through a bag of vintage paisley shirts and tight pants that he's never worn ("I was saving them for when I got big"), he is clearly out of his mind on drugs--not just high at that moment (though he certainly is), but burned out from decades of use. Later in the film, he confirms as much, clicking off the stats without hesitation or figuring: he's been doing drugs for 44 years, heroin for 39, crack for 22. Bobby Liebling, by anyone's medical standards, should be dead.

The notion of mortality casts a long shadow over Last Days Here. This is a man who seems one fix away from an overdose, or worse (his mother: "I like him to have a dream. Without his dream, I'm afraid he might kill himself"). Yet whatever possibilities exist in his life, whatever happiness he might have had or might still have, are a result of his immortality on wax.

Liebling's band, Pentagram, only released one official album, in the mid '80s, and that wasn't even their original lineup. What became interesting to fans of underground metal were their earlier, 1970s recordings, demos and home tapes that weren't released until decades later. It was less a cult band, one fan says, than it was a secret. Their music was dark and doom-ridden, years ahead of its time. They could have been big, and indeed, there were opportunities--an audition for KISS, a session with Columbia Records producer Murray Krugman. They just couldn't get their shit together, and most of the time, Bobby was to blame.

The band went through numerous permutations in the ensuing years, with something like 25 members coming and going (some of them pop up, to share their war stories). The only constant was Bobby, who has spent the decades living in his parents' "sub-basement" in Germantown, Pennsylvania. "What are his prospects?" his mother asks the filmmakers, not disingenuously.

In a word, they're not good. Argott and Fenton's film is somewhat astonishing in its intimacy; we see Liebling searching the cracks of his couch for "a piece of crack," or pulling back gauze to reveal his horrifyingly decaying arms ("I have something unknown... that is parasitic," he insists). He finds a girl in Philly, a fan who is years younger than he; he moves there to be with her, and it falls apart almost immediately. The cameras find him on the phone with her, pleading, and it's uncomfortably close and personal. Earlier in the film he owns up to his extended adolescence ("I've been Peter Pan my whole life, man"), but that scene brings it home; he's 54 years old, but he still sounds like a desperate, lovesick teenager.

It's hard to decide what's driving him more: his arrested development, or his pronounced self-destructive streak. Much of the stress from the later falls on Sean "Pellet" Pelletier, a hardcore fan who became Bobby's manager--and, consequently, his friend, confidante, and handler. Last Days Here is Bobby's story, but it's Pellet's too; he's a likable self-proclaimed hippie, capable of a pronouncement like "Not only is it a journey of the mind, but it's a real exodus, man," yet he cares deeply for his hero, and the pride he takes in the rescue mission speaks insightfully about the power of fandom.

To its credit, the film isn't all drugs and doom rock; the filmmakers have a sense of humor (I particularly liked how Krugman is identified with on-screen text as a "big time record producer") and a way of digging the emotion out of this sordid tale. The film is sharply assembled, with Argott and Fenton (who also did The Art of the Steal) constructing the lead-up to a big, possible comeback show in a way that includes us in the high hopes and expectations of the fans. (They also build in a bit of suspense by waiting till late in the game, close to that date, to share footage from the last two, very bad gigs.) They payoff is a bit of a fumble--there are audio issues that either should have been prevented, or that show the filmmakers trying to be protective--but the sequence still works.

I'm honestly not certain where Bobby will go from here, and after spending an hour and half with him, you're half afraid to ask. But it's really something, how heartfelt and genuine Mr. Liebling is at the story's end. Last Days Here is the kind of movie that's easy to resist, since its subject seems so patently fixated on destroying himself. But you're pulling for him, which says as much about the skill of the filmmaking as it does about the content of his character.