The film may originally have been released at 73 minutes, but all that survives today is a fast-paced 59-minute version. A Warner Archive manufactured-on-demand title, the full-frame, black-and-white Thirteen Women gets a solid, all-region video transfer though, alas, there are no extra features. 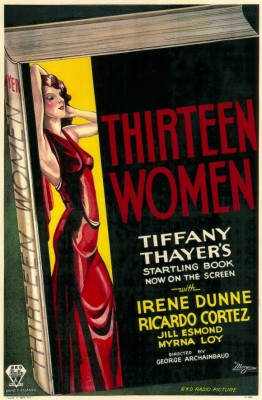 A group of women, alumnae of the elite St. Albans Seminary, all begin receiving uncannily accurate horoscopes from Swami Yogodachi (C. Henry Gordon). His predictions for trapeze artist June Raskob (Mary Duncan) are dire, that she'll accidentally cause the death of her sister and high-wire partner, May (Harriet Hagman), yet another graduate of the seminary. Soon after the arrival of fellow graduate Hazel Cousins (Peg Entwistle), the terrified June loses her grip on May in the middle of their act. She falls to her death and June goes insane. Not long after, Hazel murders her husband, exactly as the Swami had predicted.

The surviving women become obsessed that they, too, will meet horrific ends. However, it turns out that Yogodachi's secretary, Eurasian Ursula Georgi (Myrna Loy, in familiar Asian makeup), is actually rewriting many of the Swami's predictions, changing them from happy, positive ones to doom-laden visions full of death and despair. A "half-breed type: half-Hindu, half-Japanese," Ursula had years before entered St. Albans Seminary's finishing school, hoping to be accepted as white. Instead, she was ruthlessly tormented and drummed out by the women now the target of her revenge. To facilitate her vengeance, she murders the swami, using her powerfully hypnotic gaze to cause him to fall off a subway platform just as a train roars into the station.

Only Laura Stanhope (Irene Dunne) is skeptical of the horoscopes, but even she begins to waver as the death toll mounts. She turns to police detective Sgt. Clive (Ricardo Cortez) for help.

Loy's role was originally to have been played by Zita Johann (The Mummy), but she was fired and replaced by Loy, then in the midst of her exotic period, often playing foreign temptresses, most notably as the daughter of Dr. Fu Manchu (Boris Karloff) in The Mask of Fu Manchu, released soon after this though probably filmed before. With her upturned nose and light green eyes she looked anything but authentically Asian, but she was undeniably striking in a black wig, eye makeup, and racy gowns. In most of these pictures, Loy's screen time was limited, but in Thirteen Women she practically has to carry the entire film on her shoulders, and her limitations in these parts is painfully apparent. As soon as she opens her mouth and begins speaking, however, she becomes ridiculous instead of alluring. (However, beginning with The Prizefighter and the Lady and The Thin Man Loy would completely reinvent herself, commencing the most productive phase of her long career.)

The picture is built around a series of Grand Guignol set pieces, all of which generate considerable suspense: the doomed trapeze act (shrewdly filmed in barely perceptible slow-motion, prolonging the agony), the Swami's spectacular fall from the subway platform, and all the later material as evil Ursula tries to murder widow Laura's only child. Back in 1932, more innocent times, this must have really terrified moviegoers.

Thirteen Women is also notable as the only film of Welsh stage actress Peg Entwistle. Two days into the film's release the tragic actress, broke and disheartened by her stalled movie career, climbed the "H" of the famous Hollywood sign (which at the time read "Hollywoodland") and leapt to her death. "I am afraid I am a coward," read her suicide note, "I am sorry for everything. If I had done this a long time ago, it would have saved a lot of pain. P.E." Her role in Thirteen Women is relatively short and confined to the first 10 minutes or so, but she comes off well.

The brief running time of this version also resulted in the complete absence of two of the thirteen women of the title. Phyllis Cerf and Betty Furness's scenes were, apparently, cut.

George Archainbaud, an unlikely choice for those familiar with his later work, directed the picture. Born in Paris, the former actor and stage manager began directing movies in 1917, initially in Fort Lee, New Jersey. He seems to have directed, prolifically, films of all kinds during the silent era and through the 1930s, this and The Lost Squadron (also 1932) being among the best-regarded examples.

However, after the early '40s Archainbaud switched almost exclusively to B-Westerns, including most of the later Hopalong Cassidy and Gene Autry movies as well as the TV shows that followed those film series. He also directed myriad episodes of The Lone Ranger, The Adventures of Champion, Annie Oakley, among others and, up until his death, Lassie, a show about as far removed from Thirteen Women as can be imagined. He died in 1959.

Presented in 1.37:1 full-frame format, Thirteen Women looks fine throughout, despite a few signs of minor film damage. The picture is sharp, a pleasant surprise given that the original camera negatives to so many RKO films are, reportedly, lost forever. The Dolby Digital mono audio (English only, no subtitle options), is clean and clear. No Extra Features.

Not quite a horror film but in that ballpark given the horrific scenes and slight but definitely there fantasy elements, Thirteen Women is worthy of rediscovery by both fans of salacious pre-Code films and classic horror movie buffs. Highly Recommended.