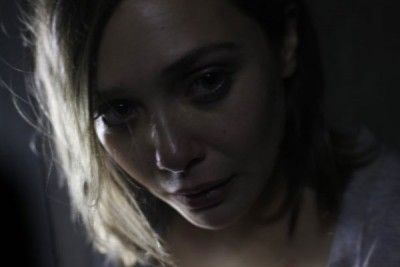 Something's just a little off in the opening scenes of Chris Ketnis and Laura Lau's Silent House--not in the execution, but in the events they're capturing. A young woman named Sarah (Elizabeth Olsen) is at her family's lake house. They don't use it much, and it has been taken over by squatters, who've smashed out the windows, and rats, who've eaten through the electric lines. Thus, though it's light outside, it's totally dark within. Ah, the contortions horror movie makers must engage in to create a mood.

Sarah, her dad (Adam Trese), and her uncle (Eric Sheffer Stevens) are packing up the house, and trying to fix it up for sale. A young woman (Julia Taylor Ross) stops by to say hello; she acts as if she knows Sarah, who isn't so sure. When Sarah goes back inside, the two men have fought, and Uncle Peter takes off. Sarah's dad sends her to pack. And that's when things start going bump.

Silent House, a remake of the 2010 Uruguayan horror flick The Silent House, is the first film for Kentis and Lau since the giant success of Open Water clear back in 2003. Most of its advance publicity thus far has focused on Olsen (Silent House premiered at Sundance '11--the same festival as her breakthrough picture Marcy Martha May Marlene), and the film's distinctive style; it is told in real time, ostensibly as one, unbroken shot. (There are actually several points where the filmmakers cut and cleverly masked the edits--as Hitchcock did in Rope.)

Whenever a filmmaker latches on to a flashy, look-at-me gimmick like this, and the results work, one must ask: are we responding to the narrative, or the novelty? Stripped of the show-off trickery, would the picture still play? In the case of Silent House, a case could probably be made either way. Lau's script (adapting Gustavo Hernandez's original) is plagued by some less than subtle exposition; within the first ten minutes, there are awkward lines like "love you brother," and "my brother," and "your dad" and "Hi, Uncle Pete!"--we've got it, let it go. Later in the film, Sarah makes a couple of rather dubious choices (then again, that sort of comes with the territory). But for the most part, the story is unpacked efficiently, and its move into psychological terrain in the final scenes (a risky and potentially bumpy transition) comes off. Ketnis and Lau's direction is compact and professional, though the early attempts to establish the geography of the home don't really stick, which becomes a bit of a liability later on.

There are moments where the technique gets in the way--the lack of edits occasionally leaves Olsen out to dry, acting-wise--but for the most part, it's bluntly effective. In the film's best moments, the device actually makes the film seem more honest in its execution than the average horror movie; since they're obligated to hold the camera on the subjects (mostly), and can't cut away, it feels less like they're keeping things from us. Instead, we rely on suggestion--aided by the masterful sound design--and the shock of people, things, etc. breaching the frame.

Olsen is onscreen, if memory serves, for the entirety of the running time (just shy of an hour and half), so it's a bit of an acting decathlon for her, and she does well. When things start to get scary, she has a close-up while hiding under a table that is utterly wrenching--she's just acting her heart out up there, and her charisma and believability make her an ideal heroine. I'm not sure how long she'll be making oddball little horror movies, but I'm glad she made this one; it's got some tense sequences, a few good scares, and it employs its central conceit rather ingeniously. It's not a masterpiece or anything, but it's an effective piece of work.