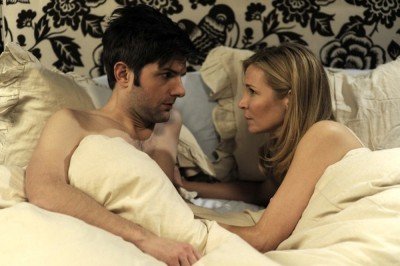 It is our loss, as a movie-going collective, that we're only getting a new Jennifer Westfeldt movie every five or so years. The charming writer/actor, who broke through in 2002's Kissing Jessica Stein, makes her directorial debut with her new film, Friends with Kids, which has the very good fortune of including no less than four members of the Bridesmaids cast (Kristen Wiig, Maya Rudolph, Chris O'Dowd, and the filmmaker's longtime man-friend Jon Hamm) in major roles. This will certainly result in some confused moviegoers thinking it's a very quickly produced semi-sequel. They won't be too disappointed; like that film, Friends with Kids is a consistently funny female-driven picture with a refreshingly bawdy sense of humor, and though some will say it's a traditional rom-com, I'd counter that Bridesmaids was too--this film is just more transparent about it.

The set-up: A group of mostly-married friends (Wiig and Hamm, Rudolph and O'Dowd, Westfeldt, and Adam Scott) have entered the baby-making pool, and the two remaining singles, Julie (Westfeldt) and Jason (Scott), are horrified by what's transpired. Parenthood appears to have transformed their loving and affectionate married friends into shrieking, unhappy, passive-aggressive bores. While contemplating the hypotheticals, they come up with an idea (it's an idea that's probably a lot more likely to happen in a movie than in real life, but hey, this is the high concept, so let's go with it): they decide to have sex just enough to have a baby, which they'll raise together without actually getting together. It'll be like they're divorced parents who never married. ("I will be 100% committed to this, half the time," he promises.) They've been friends for half their lives, and there's no real attraction, so no problem. Right?

You will win no carnival prizes for guessing that all does not go precisely according to plan--that having a child together in a progressive, cavalierly offhand kind of way is not as simple as it sounds, that emotions might arise and feelings might get hurt, etc. But Westfeldt isn't trying to surprise us with a stick-and-move here. The outcome may be predetermined, and frankly, the genre being what it is, that's not cause enough for complaint (though we often do so anyway). Yes, things will get sticky when he meets a hot younger woman (Megan Fox), as they will when she meets a sexy single dad (Edward Burns). What's interesting is not that those things happen, but how Westfeldt deals with those events--how Jason chooses exactly the wrong moment, in terms of Julie's emotional progression, to tell her about his new girlfriend, and the specific and real way in which she responds.

In other words, the picture is less about where we end up than how we get there. Westfeldt's screenplay is sparkling yet informal, filled with casual asides and conversational wit; the group byplay is excellent, the throwaway jokes and sly one-upsmanship recognizable and genuine. Early on, it seems that Hamm and Wiig aren't being put to their best use, but Westfeldt has been subtly moving the film towards a big group scene (a New Year's Eve dinner at a Vermont hideaway with all the players involved, including the new boyfriend and girlfriend) that teeters back and forth between comedy and drama with a swiftness that, in lesser hands, would cause whiplash. It's tricky as hell, this centerpiece scene, a balancing act that Westfeldt and her cast (Hamm and Scott particularly) pull off with aplomb. And that's the point at which the movie really becomes something special--I was frankly a little surprised by how involved I'd become with this story, and with these people.

There are problems here and there--we appear to be missing a final scene with Burns, we get entirely too little of the great Kelly Bishop (as Jason's mom, she hustles into the hospital room with a brusque "This is all very weird"), and some of the character types are on the pat side (Scott's a ladies man who's afraid of commitment, to give the most egregious example). This is all niggling, though. If the conclusion is rote, it's charming anyway, and it takes a nice, raw turn that I certainly wasn't expecting. I wouldn't dream of ruining the last line, but I'm betting you'll smile when you realize that's the one they went with.