We Need to Talk About Kevin


Approaching writing about a movie like We Need to Talk About Kevin is not nearly as difficult to broach as watching it, but like the film itself once the initial hurdles of apprehension are cleared, the rest of the discussion is one of passion and enthusiasm and flows easily. As it turns out, regardless of the material the film's merits go beyond any preconceived notions of what the source material might have in mind.

Based on Lionel Shriver's novel, the story was adapted into a screenplay by Rory Kinnear and Lynne Ramsay, (Ratcatcher) the latter of whom directed the film. Tilda Swinton (Burn After Reading) plays Eva, an accomplished travel writer and author who meets Franklin (John C. Reilly, Cedar Rapids) and the two have a young boy named Kevin. Eva puts her career in a slight holding pattern to take care of Kevin, and her frustration at raising him shows a crack here and there, and perhaps Kevin notices these cracks as a young child, because Kevin's acts of rebellion incrementally escalate. Whether it is still wearing diapers at seven years old and still soiling himself or moving onto a teenaged Kevin who belittles his younger sister, things do not appear to be getting better for Eva and Franklin when it comes to Kevin, until Kevin commits an act so unthinkable that its impacts on those around him are permanent and irrevocable. 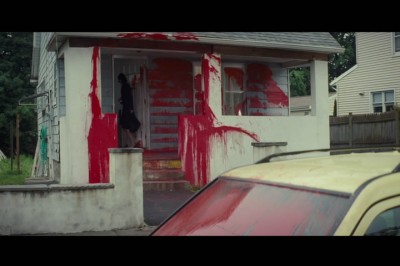 The summation is fairly linear but to be clear, the film's story is not told so, jumping head to the approaching two year anniversary of Kevin's acts and how Eva is coping with them even now. The film jumps back to the days of Eva's brief joy before giving birth to Kevin and in the time afterwards, shows a woman that perhaps remains unsure and questioning if having a child was the right thing to do. Not within the sense of Kevin perhaps being a monster, because I do not think even she is that prescient, but simply looking at it from her perspective. Maybe having a child was something she felt she had to do, and the stress she has been overcome by since then prompts her to passively lash out at what she thinks is the source of it all.

The important thing to not about We Need to Talk About Kevin is that it balances what would normally be considered an art film with a compelling performance by Swinton so well that you forget just how much of an art film it is. To address the former first, Ramsay incorporates searing imagery into the film, using red at every opportunity starting from the beginning in a nice form of symbolism I suppose. But looking past the red, she includes many tights shots of her actors expressing resentment and manipulation in the cases of Jasper Newell and Ezra Miller, who play 7 year old and 16 year old Kevin, respectively.

Then you have Swinton's performance, something that is so demanding and searing that it is hard to accurately summarize. In the present day, she quietly attempts to disappear as much into the background as possible. Long since vanished, her writing career has morphed into modest work at a travel company in a strip mall. Strangers manage to capture glances at her, wondering just how she was able to not recognize the signs of Kevin's behavior early on. She consciously avoids the survivors and victims' families, even when one wants to talk to her and is genuinely curious as to how she is doing. Eventually the topic is going to come up, and what is she going to say? What CAN she say? Even on a brief moment of happiness such as getting the job, she is slapped by a stranger within moments after leaving the office. She cannot express such things for fear of being a heartless monster.

Looking at the flash backs, her 'battles' with Kevin both as a youngster and a teenager are also full of moments where the early frustration gives way to a feeling of hopelessness. Franklin is not much of a father, either throwing overcompensating gifts at Kevin at the holidays or just generally kicking the can down the road and hoping that the problem with him will just go away after he leaves the house. That hopeless feeling continues to build as Kevin becomes even more guarded and protective as a teen, with every word from him full of some version of derision or sarcasm. Yet when we see the ending sequence when Kevin and Eva see each other on one of Eva's many visits to prison, there may seem to be a glimmer of hope for Eva to hang onto. Having recently seen the excellent Werner Herzog film Into The Abyss, the best way I think I can say it is that perhaps Kevin has turned a corner, even with all of the behavioral anti-psychotics he may be given in prison. Maybe that is what Eva is still holding onto when it comes to regain some sense of normalcy, because really that is all she may have. 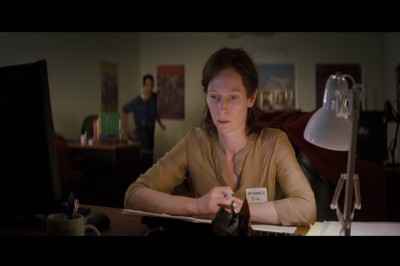 There is no denying that there are a couple of things that serve as a stigma surrounding We Need to Talk About Kevin. Along with the subject matter, the film's release date was delayed in some areas in the wake of the mass killings in Norway in 2011. And for a film to tackle something like a murder scene at a high school so bravely is something that people may resist watching. However, through Ramsay's direction Kevin is a film that deserves to be seen by as many eyes as possible. Swindon's performance is marvelous (perhaps one of the best ones in my recent memory), and the story achieves a mix of being an emotionally exhausting journey yet still bravely provoking thought and hopefully generating further discussion about the film and its subject.


The AVC-encoded 2.35:1 widescreen presentation given to We Need to Talk About Kevin handles a lot of things over the course of its runtime, but handles them all adeptly. One of the opening scenes in the film is in Spain during a festival where the participants throw in and are immersed by tomatoes, and the red is represented accurately and vividly in all its forms. In another scene where the teenaged Kevin is practicing his archery, a shot on his pupil goes in so close that not only you feel like you see into whatever it is that he translates into joy, but the detail within the reflection off Miller's eye is clear and sharp (the film's cinematography is handled by Seamus McGarvey, who deserves consideration for his work here). The film's visuals are clearly given their due on the Blu-ray disc.


Your choice of a LPCM two-channel track and a DTS-HD Master Audio 5.1 lossless surround track. While I was surprised to see a PCM track as the alternative, it didn't stop me from going the DTS MA route, and the result is amazing. Directional effects are used with purpose and are convincing, starting early on when Eva's name is called in the rear channel just before a job interview. Channel panning is just as evident, and Ramsay's intent on using music of various types and eras transmits through the soundstage just as good also, whether it is the work of Liu Fang or the Beach Boys. Even in the calmer scenes dialogue is balanced and requires little user adjustment. The lossless sound takes full advantage of Ramsay's artistic intent.


Some stuff to speak off, and what is here is respectable. "Behind the Scenes of Kevin" (27:05) includes the cast and crew thoughts on the story and on the film itself, while Ramsay shares thoughts on the cast. Switching back to the cast, they recall their work on their respective characters and their thoughts on Ramsay as a director, and Ramsay discusses her work process. The set and production design of the film are recounted and the use of types of camera for the imagery in the film is covered. It is a decent look at the joint. There is some additional footage without sound on the opening shot in Spain of the tomato festival (4:15), followed by a question and answer session with Swinton (17:52) at the Telluride Film Festival in September 2011 where she talks about her process and her approach to acting, along with writing and producing. It's engaging and slightly quick. An interview on the red carpet in London with Shriver (3:58) is next, and she shares her thoughts on the inspiration for the book and the input, if any, she had in the film. The trailer (1:45) wraps things up. There is a second disc which includes the standard definition copy of the film, and the extras are replicated here as well.


We Need to Talk About Kevin tackles its subject fearlessly, and Swinton's performance helps give it the confidence it would need to do so. The result is a gripping, powerful film that is a Top 10, Best Of film no matter what year it may be released. Technically the disc is superb and supplementally there is enough here to float the boat. An absolute must-see, which strong leanings to adding to your video library.