Sentimental in the good sense, Little Lord Fauntleroy (1936) is a hard-to-resist family film that still works its magic more than 75 years after it was made. Producer David O. Selznick's first independent feature after leaving MGM, it's first class all the way with an especially good cast of British and American players.

As with other Selznick International Pictures from the 1930s and released through United Artists, Little Lord Fauntleroy eventually fell into public domain and, while widely available, has suffered the indignities of bottom-feeder labels who couldn't care less about such trivialities as picture and sound quality. This Kino Classics release, while far from perfect, sources an original 35mm nitrate print resulting in a better than acceptable presentation. 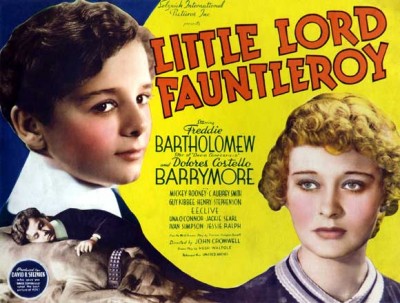 The husband's father, the fabulously wealthy but bitter, miserly, and cantankerous Earl of Dorincourt (C. Aubrey Smith), had long before disowned his son for marrying an American commoner. However, with all his sons now dead, the Earl dispatches his attorney, Havisham (Henry Stephenson), to America to bring Ceddie, the new Lord Fauntleroy, to England.

However, the Earl refuses to allow Ceddie's mother to join them at Dorincourt Castle, though he allows her to live on a nearby estate. She accepts the terms for Ceddie's welfare, though through Havisham she refuses the allowance her father-in-law offers her, nor does she reveal to Ceddie the truth about his prejudice toward her.

Ceddie is heartbroken, first to leave behind his close friends in America (all poor) and later he's shattered upon learning Dearest cannot join him at the castle. Soon, however, Cedric's basic decency, generosity, and unfailing kindness toward others gradually begin to warm the cockles of the old man's heart.

Little Lord Fauntleroy had been filmed at least three times before this, most famously as a 1921 Mary Pickford vehicle, the actress audaciously playing both Cedric and his widowed mother. Bartholomew had starred as David Copperfield (1935) for Selznick at MGM, and Little Lord Fauntleroy was an obvious follow-up.

Bartholomew was, around this time, the biggest child star after Shirley Temple. Their screen personae were similar; both had angelic features and were capable of expressing raw emotion, unbridled joy and terrible sorrow with an almost alarming degree of verisimilitude. Though in his most famous film, Captains Courageous (1937), Bartholomew played a spoiled brat (for that film's first half, anyway), here as in all of Temple's pictures, Bartholomew likewise is unfailingly cheerful and kind and, again as in myriad Temple movies, this kindness gradually wins over the old curmudgeon holding the purse strings. C. Aubrey Smith himself played a very similar role the following year in the Shirley Temple vehicle Wee Willie Winkie.

Bartholomew's acting style is, like Temple's, somewhat artificial and self-conscious some of the time yet emotionally authentic when need be. His reactions upon receiving a bicycle from Dearest on his birthday, saying goodbye to his Brooklyn friends, and being separated from his mother are all rich with feeling. Mickey Rooney, also very adept at this kind of thing from an early age, plays Ceddie's bootblack friend in this, and their parting scene is unabashedly moving.

The cast is peerless, as if Selznick raided every Brit and Irishman in Hollywood for a part. Smith and especially Stephenson are very good, as is Una O'Connor as Dearest's maid. E.E. Clive, Constance Collier, Jessie Ralph. Virginia Field, Lionel Belmore, Robert Emmett O'Connor, Mary Gordon, C. Montague Shaw and many other familiar faces make appearances.

According to the packaging, Little Lord Fauntleroy was "mastered in HD from an original nitrate 35mm print, preserved by the George Eastman House Motion Picture Department." The 1.33:1, 1920 x 1080p image has lots of scratches and other wear including several splices resulting in slight jump cuts. On the other hand, the presentation runs 102 minutes, several minutes longer than the running times listed by most reliable sources. It's clearly not sourced from anything close to the original camera negative, but at least it doesn't have any of that smeary, third-generation video look of most PD titles, and neither it nor the English mono-only audio (with its fair share of crackles, popping, and other imperfections) have been overly-cleaned up with DNR. In short, it looks like film, albeit film that's been around the block a couple of times.

This is a great family film, still most enjoyable, at times moving, and ultimately uplifting. And unless original film elements turn up, this is probably the best Little Lord Fauntleroy is going to look for the foreseeable future. Highly Recommended.