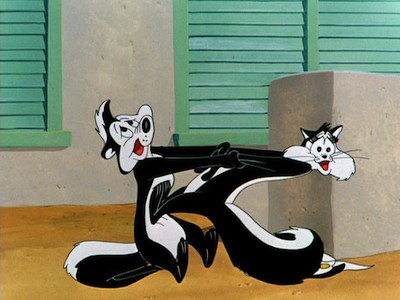 It probably will come as no surprise to anyone who knows me, but some girls I hung around with in high school nicknamed me Pepé le Pew. It was a moniker both affectionate and scaldingly ironic. I liked the ladies but couldn't score even if my opponent gave me a 50-point homefield advantage. In truth, playing up the image allowed me both an outlet for my flirtatious nature and a persona to hide behind. Pepé le Pew doesn't care if he gets rejected, Pepé le Pew is relentlessly oblivious.

The new Looney Tunes Super Stars: Pepé le Pew DVD collects all 16 "official" Pepé cartoons made from 1945 to 1962, alongside the Tweety and Sylvester short "Dog Pounded," which features a cameo from the love-hungry skunk. This is a great boon for Pepé le Pew fans, as 14 of the 17 cartoons have not yet had a home video release. Now we can have the whole shebang in one single-minded collection.

"Single-minded" is actually a good way to describe Pepé le Pew. Chuck Jones created the smelly Don Juan in 1945 for the cartoon "Odor-able Kitty," though he was not yet the fully realized French stereotype he came to be. His name at the time was "Stinky," and as the punchline of the short reveals when his wife and kids show up, Stinky is really an American skunk putting on the French accent to woo the ladies. Or, in this case, a boy cat dressed in skunk drag. One can only imagine what Fox News would make of this scenario today!

Pepé's French origins have been attributed to a variety of different characters. Chuck Jones has cited Charles Boyer's performance in Algiers, as well as a fellow animator whose stories of his own alleged womanizing struck Jones as funny. Elsewhere, Jones has also suggested that Pepé served as his own avatar in a wish-fulfillment kind of way. Others regularly assume Maurice Chevalier is the object of parody, and there are definitely echoes of Chevalier's performances in the popular Ernst Lubitsch musicals and also Gigi. Regardless, Pepé became Pepé in 1947's "Scent-imental Over You," establishing the formula for most of the shorts to follow: Pepé sees a female cat (or in this case, a chihuahua in a fur coat) who has accidentally had a white stripe painted across her back and mistakes her for a skunk, proceeds to doggedly pursue her affections only to be rebuffed repeatedly for his stench and overbearing approach. (One exception to the formula was Arthur Davis' 1948 short "Odor of the Day," in which an unnamed skunk competes with a dog for lodgings in a snow storm.)

While this kind of step-and-repeat can be tiring, with a master like Chuck Jones at the controls--he directed all but three of the pieces included here--the familiar framework ends up providing room for endless variation. Pepé in the Foreign Legion, Pepé in the zoo, Pepé in the Louvre, Pepé in a perfume shop--these are all places where Pepé le Pew ends up, and Jones and his animators find fresh gags in each new locale. It doesn't hurt that the animation is stupendous in all of these, with Jones growing ever more stylish in the 1950s.

Voice actor Mel Blanc should also be considered an MVP in the Pepé le Pew cartoons. His goofy French accent and even goofier mangling of the French language never fails to be amusing. It takes only a passing knowledge of the language to get the jokes, some of which are as simple as putting the article "le" before everything the characters say, and some of which go into more complicated wordplay.

Looney Tunes Super Stars: Pepé le Pew is probably not going to be for everybody. The jokes aren't as universal as in, say, Bugs Bunny cartoons, and the silliness could be considered redundant over nearly three hours. Yet, for those of us who recognize the very human behavior being parodied here--namely, one's continued quest for love, despite the heartbreak that it consistently causes--there is much cathartic, knowing laughter to be had. Le hardy har har. 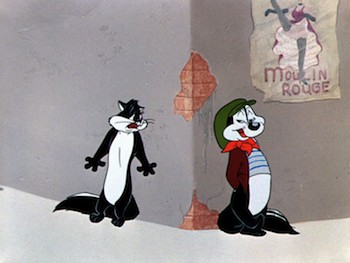 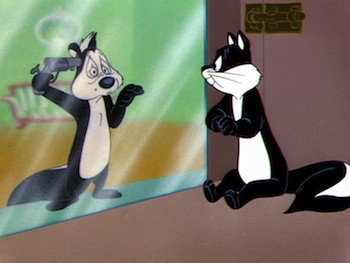 Cartoon List: Odor-able Kitty * Scent-imental Over You * Odor of the Day * For Scent-imental Reasons * Scent-imental Romeo * Little Beau Pepé * Wild Over You * Dog Pounded * The Cats Bah * Past Perfumance * Two Scent's Worth * Heaven Scent * Touché and Go * Really Scent 8 Who Scent You? * A Scent of the Matterhorn * Louvre Come Back to Me!

Video:
As Looney Tunes Super Stars: Pepé le Pew loads, you will be prompted to choose between a full frame version and a widescreen version. This will seem like a superfluous choice when the program first begins, as the first 50 minutes or so features only cartoons made at a full-screen aspect ratio. The need for the options becomes clear, however, midway, when the screen changes and we see several cartoons in a widescreen presentation. The quality of the image is decent throughout, with some print damage but otherwise a nice rendering of the colors and fairly good resolution. The one exception is the very first cartoon, "Odor-able Kitty," which is plagued by jagged lines and pixilation. Just hold your breath and grit your teeth, you will get through it, and the rest of the program looks adequate.

Sound:
The original audio is mixed in mono and sounds fine. There are no real glitches or extraneous noises. I found really nothing to either praise or deride in the soundtrack. There also appears to be what I believe to be an alternative language track in Thai.

There is English Closed Captioning and a French subtitle option, the latter of which is kind of amusing when you think about it.

FINAL THOUGHTS:
Looney Tunes Super Stars: Pepé le Pew is a must for fans of the malodorous masher. Collecting all of the original appearances of the seductive skunk, this disc brings together previously out-of-print cartoons to finally give a neglected member of the Warner Bros. stable his due. Though the package isn't much to boast about, the content is fantastic, and thus in the end, Recommended. 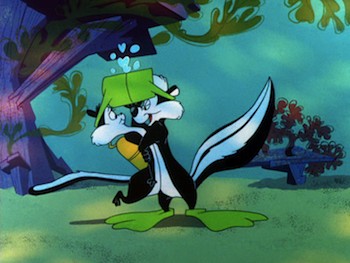 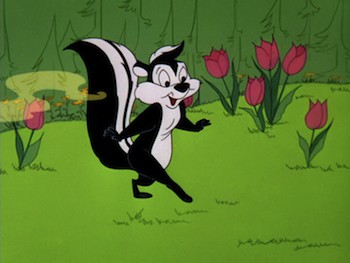