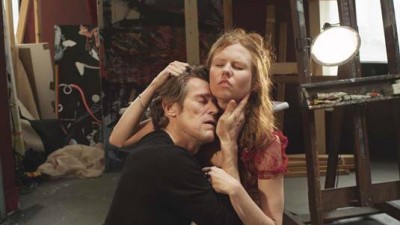 He's shaving. "Why even bother?" she asks, not unreasonably. The world's going to end at 4:44 the next morning, you see, so facial hair grooming probably shouldn't be much of a concern. And there's the question: faced with the last day of existence, would you keep those little habits in place? Would you maintain that two years of sobriety? Would you reach out to those you've neglected? What exactly would you do with those final, precious hours? These are the questions asked by 4:44 Last Day on Earth, a melancholy but compelling drama from Abel Ferrara, a filmmaker I must confess not keeping proper tabs on in the years since his breakthrough picture Bad Lieutenant. But I always knew he was out there, making his gritty, uncompromising little films, and 4:44 is a difficult yet thoughtful effort.

As indicated by the title, the action is confined entirely to the last 24 hours or so of existence before "the final explosion," according to Cisco (Willem Dafoe)--an Ozone meltdown, after which "there will be no survivors. The world will end." Everyone has sort of accepted it, or at least isn't fighting it; the overall tone is one of mellow resignation. Frankly, it feels as though the real end of the world (if we had any warning, anyway) would go something like this.

Cisco shares a loft in New York with his artist girlfriend Skye (Shanyn Leigh), a young painter who is spending the final day making a work of art that, presumably, no one else will ever see. The action is mostly confined to that apartment; they eat, fight, fuck. He wanders up on the roof and witnesses a neighbor casually jumping from his fire escape; that guy's not going to stick around. Cisco, on the other hand, has a few things to take care of--an estranged daughter and ex-wife to contact, old friends to rap with, choices to consider very, very carefully.

The opening scenes are deceptively low-key, with several scenes of Dafoe wandering in and out of his apartment, muttering to himself, a constant running monologue. He seems too detached to let all of this get to him, or at least to let it penetrate his existential cool. But something breaks during that Skype call with the daughter he hasn't been a good father to (the actor's work in this scene is particularly raw and exposed, and admirably so), and the personal interactions become exponentially more urgent.

"What if they're wrong?" his brother asks, later on. "Think about it!" This is a concern worth investigating; Ferrara's script is utterly believable except in its presumption of consensus, ignoring the notion that climate change deniers would presumably continue insisting that the danger is overstated right up until 4:43. (A news anchor even says "Al Gore was right" at one point, an assessment that Fox News would spend the rest of our time on earth arguing.)

That said, there is an intensity in the closing scenes, with their unsettling music and imagery, indicating that the perceived modesty of Ferrara's ambitions early on may well have been a ruse. But it's not all bombast, either; he finds room for moments of melancholy, like the boundlessly sad moment that Cisco sees from his roof of a neighbor sharing a big steak with his good dog. The apocalypse is a big idea that, in the run-up to 2012, keeps making its way into our films, but like Melancholia and Take Shelter, Ferrara's 4:44 Last Day on Earth knows that the most frightening way to think of the end of the world is on personal, tangible, human terms.