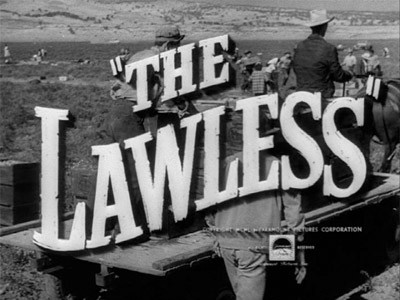 Some films play that much better after many years have passed and you can understand the context in which they were made; Paramount's gritty 1950 melodrama The Lawless is one of them. The film deals with contemporary racial prejudice in a small farming town, but you have to believe that its real message was laid between the lines. Think about it - this was made at a time when anti-Communist hysteria was at its peak. Although it contains no references to "reds" or Russians, its cautionary theme about the dangers of mob-mentality run amok reflects what a lot of Hollywood (and the rest of the U.S.) was thinking but probably not brave enough to say outright.

The Lawless (not to be confused with the recent Shia LeBouef flick Lawless) takes place in the fictional town of Santa Marta (a.k.a. "The Friendly City") in California's agricultural belt. It begins not with the usual opening credits, but a short scene with hispanic migrant workers loading freshly picked peaches onto a truck. Two of the young men in the opening, Lopo Chavez (Maurice Jara) and Paul Rodriguez (Lalo Rios), are seen driving home from work to the poorer Hispanic community where they live, Sleepy Hollow. Passing through Santa Marta, the two men get involved in a fender-bender with another vehicle driven by Joe Ferguson (John Sands), a sullen, well-to-do white teen. This seemingly minor incident helps to incite the prejudice brewing in the quiet-on-the-surface town.

The two stars of The Lawless, b-movie stalwart Macdonald Carey and the ethereal Gail Russell, enter the scene as employees at the two different local newspapers in the area. Russell's character, Sunny Garcia, helps run the Spanish-language weekly La Luz. It's at a local dance in Sleepy Hollow that she meet's Carey's Larry Wilder, a former city dweller who has come to Santa Marta to edit the afternoon daily The Union. Although the shindig is a social gathering for the hispanic community, it attracts the attention of Joe and his racist friends (which is why Larry showed up, sensing a story will develop). Sure enough, a scuffle ensues where Paul antagonizes a cop and steals a car. On the run as a fugitive, his rather innocent run-ins with a local teen girl and a farmer, both white, end up getting sensationally reported by the news media. In scenes reminiscent of Fritz Lang's Fury, the Santa Marta residents who previously kept their feelings about "fruit tramps" under wraps have escalated into an ill-informed, bloodthirsty mob. While Larry and Sunny attempt to keep order in the community (now swarming with out-of-town reporters), the search is on for one frightened latino man on the run. 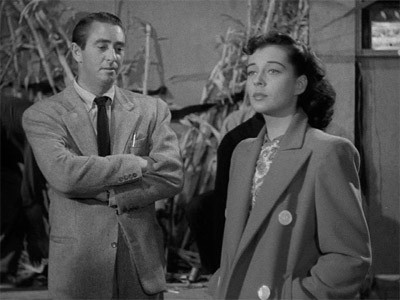 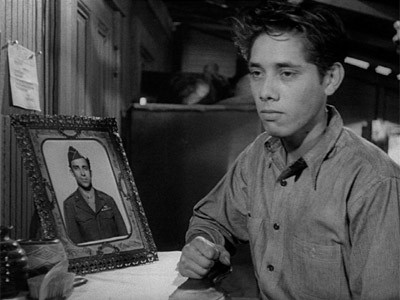 Director Jospeh Losey does a lot of interesting things throughout The Lawless, making it a cut above the average b-movie melodrama. The film was shot in two actual small farm towns in Northern California, adding tremendously to the still-relevant subject matter. Although the story develops in a far-fetched way (including a tacked-on romantic subplot with Carey and Russell), the characters are given a lot more dimension than what would normally be found in studio dramas from that era. More unusual are the casting of talented hispanic performers like Jara and Rios (who receive "and introducing" billing), who both do a great job. Of course, the filmmakers employ something of a cheat in casting blue-eyed caucasian Gail Russell as a latina (the interracial romance angle was more compellingly done in another film from this period, 1952's My Man and I), but she and Carey are solid actors who capably handle being seemingly the only sane, non-exploitative people in the town. The film also benefits from a host of interesting supporting characters, including Lee Patrick's seen-it-all reporter who is sent from a big city daily to do exactly what she's required to do - spin an exciting, exaggerated story about a girl in danger out of mere scraps of info. It's a cynical way of seeing things, with the white characters exploiting the plight of the non-whites, but recent history has showed us that it's not a unique phenomenon.

Olive Films' DVD edition of The Lawless is another bare-bones but welcome release, part of their current program to bring underrated classic-era Paramount productions back into circulation. 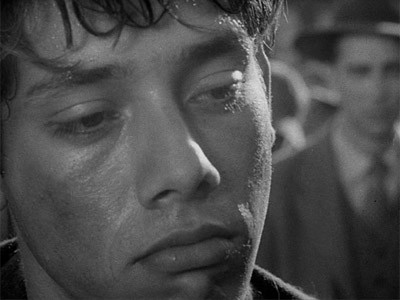 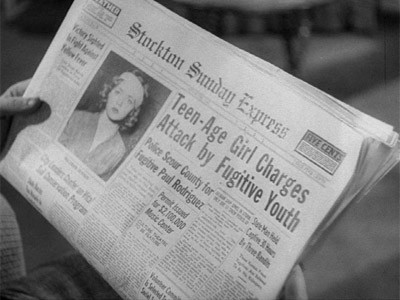 Olive Films' DVD of The Lawless is sourced from a good-looking print that has its share of minor specks and blotches. The 1.37:1 picture doesn't appear to be digitally remastered, but it's a fine transfer free of any obvious defects.

The only audio option is the film's decent original mono soundtrack, with no subtitles. The soundtrack is nicely mixed with an agreeable balance between dialogue, sound effects and an unobtrusive music score.

Although The Lawless is hampered by a nagging sense of "I told you so" ideology, it's an entertaining and solidly made b-movie. Whether screenwriter Daniel Mainwaring intended this to be a coded commentary on red-baiting hysteria is unknown, but the very concept adds even more interest to this gritty (and strikingly contemporary) tale from acclaimed director Joseph Losey. Recommended.