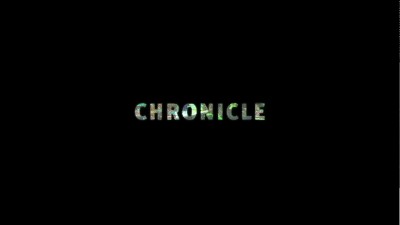 All screenshots included are from the DVD release of the film


The Movie
Origin stories are a huge tradition in superhero lore, but often times they are a small part of the overall tale or film, setting up how a hero becomes a hero, before sending him off on his adventures. Chronicle instead makes the origin the adventure, and focuses not so much on how the powers are obtained, but how they affect the characters. As such, it is one of the better superhero films in recent memory, getting the job done without all the spandex and masks, swapping them for family drama and human misery.

The star of the show is Andrew (Dane DeHaan) a sad-sack teen with a miserable home life and exactly one pseudo-friend, his cousin Matt (Alex Russell). Things change a bit though when, alongside Steve (Michael B. Jordan) one of the coolest kids in school, they find themselves in the presence of an unusual crystal, which confers telekinetic powers on the trio. While some films would pit them immediately against the forces of evil, these kids act like teenagers, goofing around, pulling pranks and honing their new talents, while using them to their advantage. For these guys, with great power comes great times.

Unfortunately, Andrew's issues, including an abusive dad and a terminally-ill mother, have not left him unscarred, and though things are going well at the moment, he can't let his guard down, and he finds his powers let him finally fight back against a world that's kicked him around for too long. Meanwhile his super-powered buddies are concerned about changes they see in him, especially the philosophically-inclined Matt, which causes some epic strife between them. Once the story is put into play, the final third, where friend is pitted against friend, is an intense ride, as the found-footage becomes a series of manifestos that reveal a crumbling mental state, before leading into a massive battle. 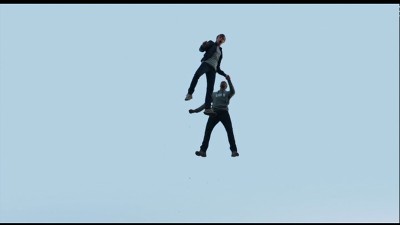 The climactic fight plays out through a variety of footage taken from different cameras across the city, some of which lack microphones, allowing the sound to enhance the scene in ways a bigger budget never could have. Though director Josh Trank and co-writer Max Landis lose (or at least have to force,) the found-footage conceit at times (who's shooting these close-ups?) overall, it's effectively used to mask the film's low cost and to get the viewer closer to the action. The introduction of Casey, as a love interest for Matt (allowing Matt's philosophy background to be hammered home) and a human tripod for the camera, was pretty superfluous though, paying off only in the final battle.

Though there's not a lot you can't see coming about this story, since it travels an overall path seen frequently by superhero fans, the intense use of these invisible powers, some of the best illustrations of telekinesis seen on film, and the striking visual moments, raise the stakes in the last 30 minutes to make it more than The Blair Witch Avengers Project. For once, found-footage was a way to tell a story rather than replace it.

This release, dubbed "The Lost Footage Edition" includes the original theatrical version, as well as the director's cut, which is a grand five minutes longer. The additions are made up mainly of extensions of existing scenes, including more discussion and pranks at a diner, a brief glimpse of near-nudity and a lot more info about Steve's life (which honestly doesn't add a great deal to the character.) One moment, which seems to try and bring things back to the crystal is just simply unnecessary, as it offers no new info and definitely no answers. That's fortunate, as the temptation to reveal the why of the powers was thankfully otherwise ignored (for the most part). Where they came from isn't important. It's what they did with them that mattered.

On a side note, the film does leave you with one question though [SPOILER WARNING]: Based on what happened, just who edited the film together and how'd they get all the footage? 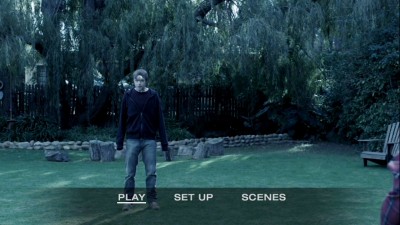 The Disc
This film arrives on a Blu-Ray in a standard Blu keepcase with a slipcover that repeats the cover art in holofoil (unfortunately the cover art is a weaker adaptation of the evocative original poster, not the original.) The disc includes options to watch the film, select scenes, adjust the languages and check out the extras. Audio options include English 5.1 DTS-HD Master Audio, English Descriptive Audio 5.1 Dolby Digital and Spanish and French 5.1 Dolby Digital tracks, while subtitles are available in English SDH and Spanish.

The Quality
If you're going to make a found-footage movie, go all the way and make it look like found footage from a camera a high-school kid could get his hands on. Outside of the big end battle, where blurs and crazy high-speed action make it look more realistic, the camera's footage is far too sharp and detailed to feel "real." The 1080p, AVC-encoded presentation does a fine job of recreating this high-end footage, delivering impressive levels of fine detail and deep black levels, while the colors are appropriate throughout. There aren't any issues with digital distractions either, but that leads to another problem. Many of the special effects are exceedingly obvious because of the clarity.

Again, it's not likely Andrew would have been able to deliver a film with a 5.1 DTS-HD Master Audio track, but that's what we got, which is fine for your purposes, as much of the energy in that last scene comes from the sound, and the surrounds get plenty to do in pumping that out, including lots of dynamic mixing to fill out the room and direct the aural action. While the dialogue is mainly right down the middle in your center channel, little hints of sound in the side and rear speakers create an engaging sound field. Overall, a well-crafted experience.

The Extras
"Deleted Scene - Matt and Casey in Kitchen" is 1:10 of Matt cooking breakfast, as Casey grills him about his college interviews. It is so removed from the rest of the film that why it was even written is unclear, however more near nudity may have something to do with it.

"Pre-Viz" (7:48) is a CGI storyboard for the film's flying and fighting scenes, so they could get their concepts down before actually filming. There are a few slight differences between what was planned and what was shot, so this gives you a chance to see a bit of the film's evolution.

A "Camera Test" (3:58) shows some sample shots done for the special effects in the film's diner scene. Oddly, these shots look far more "real" than the footage in the film.

In addition to these brief featurettes, what we could have used was a commentary from the director (and perhaps Landis as well) as first-time feature filmmakers have a unique perspective (especially since we're getting his cut of the film here.) Instead, we get "Chronicle Soundtrack Info," which amounts to a static screen indicating the album is available, may be one of the worst items to appear in an extras menu.

Also included in the package is the film's excellent trailer, as well as those for several other films, along with a code to download a digital copy of the film. 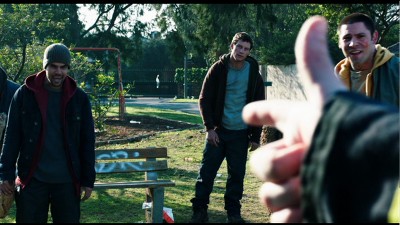 The Bottom Line
A fantastic trailer set up some very high expectations for this film, and fortunately Trank and Landis delivered with a superhero origin story that's like nothing that's come before, partially due to the use of the found-footage gimmick, partially due to a smart script that realistically explores what would happen if these teens suddenly found themselves with powers. The Blu-Ray delivers the film in beautiful quality, which, like the powers, is a blessing and a curse, but the extras feel pretty slight, so unless you really enjoy the film, owning it may be more than you'll need.