And Everything is Going Fine 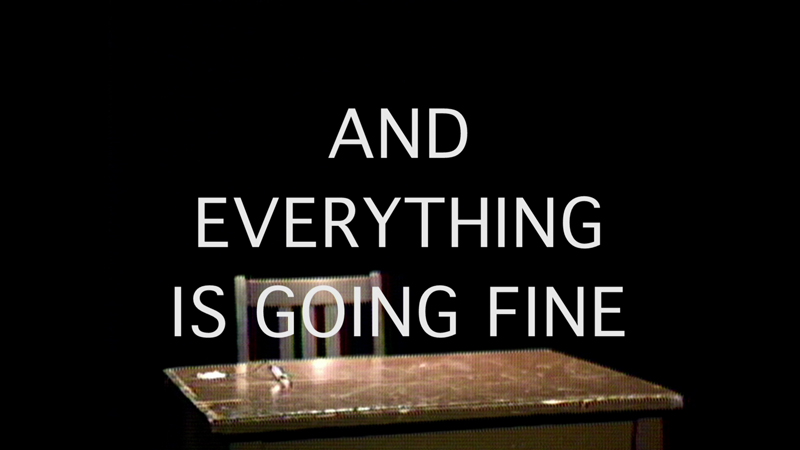 
The Movie
Any opportunity to enjoy more of Spalding Gray's work has been a welcome one for me, but it's also been a mainly fruitless quest, considering his suicide in 2004 has left us with just some unfinished work to check out, and without his distinguishing voice behind those words, it hardly seems worth the time to big in. Thus, the chance to see a new monologue from a dead man would seem like a wish likely to go unfulfilled. However, Steven Soderbergh, prodded on by Gray's family, has taken on the role of cinematic genie, and digging through the past has crafted a "new" monologue, a posthumous autobiography, grafted together from monologues (mostly excluding his three feature films), media appearances and home videos.

There aren't many people who have spoken about themselves so widely and candidly as to have covered essentially their entire life span, but then, there haven't been many people like Spalding Gray. Having made a living exposing his experiences to audiences, bit by bit, he put almost everything out there in front of a camera, and Soderbergh and editor Susan Littenberg just needed to put the pieces together to complete the puzzle. Honestly, it's not really fair to say that, as it simplifies what was a massive amount of editing labor, along with hundreds of creative decisions, starting with choosing the structure of the documentary. They could have strung together the most important elements of his monologues with interviews with friends and loved ones, or narration over Burns-ian photo displays, but instead they let Gray speak for himself, in death as he did in life. 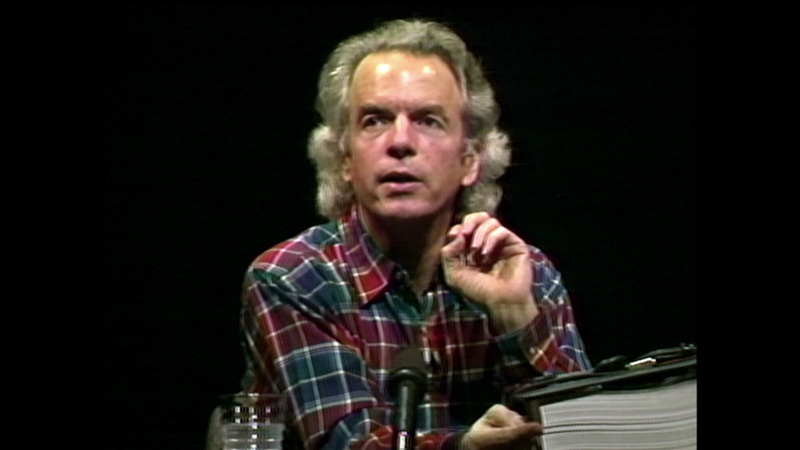 Taking clips from recordings of several of his well-known monologues, includingSex and Death to the Age 14, Booze, Cars and College Girls, A Personal History of the American Theater, It's a Slippery Slope and Morning, Noon and Night, the story unfurls, tracing his early life and being raised by a Christian Scientist mother, though his young adulthood and the traumatic suicide of his mother. Interviews from a variety of sources, from sit-downs with Charlie Rose and Joy Behar to long-forgotten shows like MTV's Mouth to Mouth (imagine a Spalding Gray being interviewed on MTV today?) and E!'s Extreme Close-Up, let him act as a commentator on his life, sharing thoughts that might otherwise not be heard in his monologues.

As usual, Gray is often quite funny, but his life was full of tragedy, never more so than after the devastating 2001 car accident that left him with brain damage, severe pain and increased depression. That this followed the happiest portion of his life, which included the birth of his two sons and the renewed sense of purpose they brought, makes the film an emotional roller coaster. An introspective interview with Gray following the accident, and footage of a remarkably aged Gray interviewing audience members on-stage, both of which were new to me, were as striking as anything he ever said in his monologues, somewhat because it's hard to connect them with the man who, in that chair, behind that desk, with that glass of water, was so full of life.

One thing that's missing, a function of the fact that the film is presented entirely in Gray's voice, is any reflection on his death by suicide (outside of the inclusion of some obtuse references to water, his mother and his legacy, which, knowing Soderbergh, cannot be a coincidence.) In fact, if you don't know about Gray, which is entirely likely for generations just coming into adulthood, from this film, you'd have no idea he was dead or how he died. Not to get too heavy here, but perhaps that's best, since, as long as his monologues survive (thanks in part of the Criterion Collection's releases), he maintains immortality, since, as he notes, he is not being reborn. There is only one Spalding Gray.

Now, I almost feel like a traitor to the cause when I ask this, but I wonder why this movie is being released by The Criterion Collection. Yes, there's something of value to be said for anything Gray produced during his life, and film fans should always be grateful when the Collection deems a movie worth their effort and thoughtfulness, especially when it's a title unlikely to get a proper release otherwise, but this one in particular seems included solely as a companion piece to Gray's Anatomy. While making it it's own release, rather than as a supplement to No. 618, allowed Criterion to grace us with two additional monologues otherwise unlikely to see the light of day, it's one that could be argued about for a long time, giving the anti-Michael Bay/genre films/Beastie Boys crowd something to chew on for a while. On the other hand, if you told me Criterion was putting out an unusual documentary about Spalding Gray by Steven Soderbergh, I wouldn't blink twice, so I can't wonder too hard. 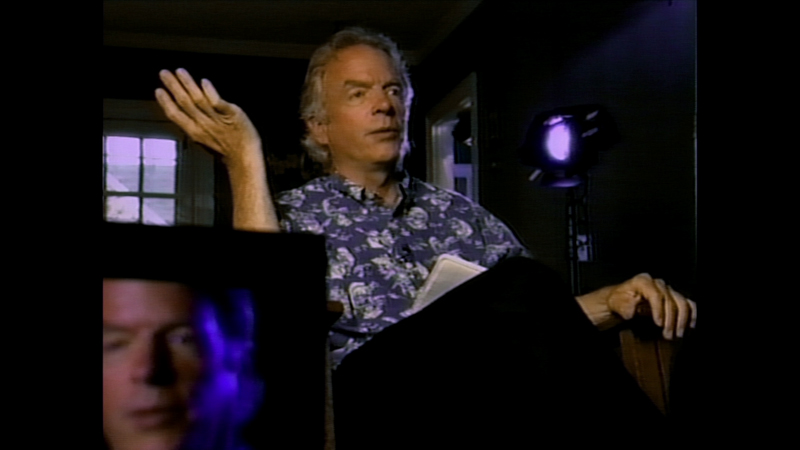 The Disc
A one-disc release in a clear, standard-width keepcase, this package includes an attractive two-sided cover, with chapter stops on the inside, designed to coordinate with Criterion's release of Gray's Anatomy. The Blu-Ray features a static, yet neatly interactive menu, with options to watch the film, select scenes (from an editable timeline or a chapter list) or check out the extras. There are no audio options, while subtitles are available in English SDH.

The Quality
The 1080p, AVC-encoded transfer presents the film in its original 1.33:1 aspect ratio, and it captures the age and quality of the materials. Though a great deal of work went into bringing the content into shape, the quality of a Blu-Ray presentation shows off the flaws of a mixed-bag of footage more than it delivers its positives. Some of the video footage looks like you're watching it through a screen door, while much of it has the look of old VHS tapes, which is exactly what it is. Some later moments are particularly sharp and appropriately colored, but that's mainly Gray's last few years, which makes up a small portion of the film. While you won't be bothered by any digital distractions, don't expect a beautiful image overall. The quality afforded by Blu-Ray feels like overkill in this situation.

In the extras, Soderbergh notes that despite the varied quality of the video elements, the sound is good across the board, and he's right. Presented in a LPCM monaural track, the sound is what is, a man talking for nearly 90 minutes. Whether he's on a talk show, sitting on a stage or captured on home video, his unmistakable voice sounds clear and free of distortion. There's not a lot to judge here.

The Extras
Like Criterion release of Gray's Anatomy, you get not just one monologue, but two, as they've also included a 1982 recording of Gray's seminal Sex and Death to the Age 14, a 64-minute meditation on the morbid and prurient thoughts and experiences of a young child in New England. Blending the two extremes of human experiences, the bringing of death and the possible creation of life, the set is frequently funny, but sticks more closely to the thoughtful, as he recounts the confusion the two ideas brought to his upbringing. The presentation is simple, taping him sitting in a chair at a table, as usual, musing in his own unique way.

Also included here is a nearly 21-minute featurette, "The Making of And Everything is Going Fine," made up of interviews with Soderbergh, Littenberg and Gray's widow Kathleen Russo. It's a boiled-down version of exactly what you'd want to know about how the film was made, including how they managed the 90-plus hours of footage from which the movie was culled, how editing decisions were made and talk of Gray's sons and their involvement and reactions to some of the content. Considering the movie was made pretty much entirely in the editing bay, it's just enough info to satisfy the curious.

Once done with the on-disc extras, which also include a praise-heavy trailer for the film, there's the usual Criterion insert booklets, as well designed as ever, with an essay by Nell Casey, editor of The Journals of Spalding Gray, as well as credits, shots of Gray and his family and a few pages of his journals (written with the psychopathic density of John Doe), along with details on the disc. 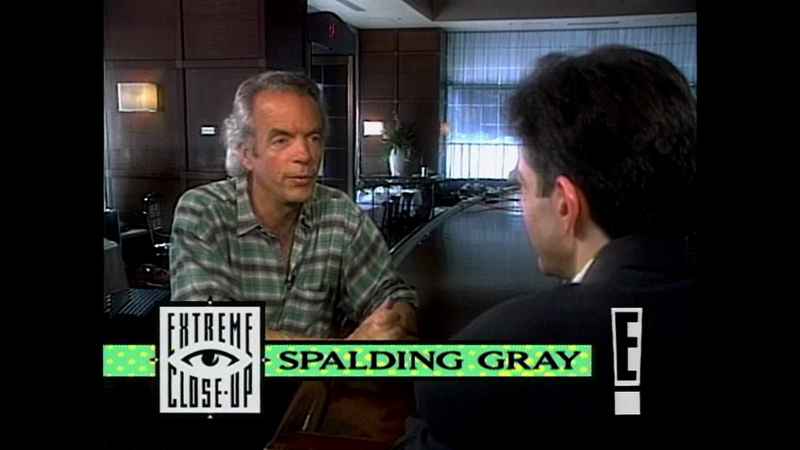 The Bottom Line
The thing that kept cropping up in reviewing this Blu-Ray, is the question of whether the film belongs in the Criterion Collection (long an obsession of spine number devotees.) As a concept, it's not hugely groundbreaking, and while Soderbergh and Littenberg did a fine job of editing together Gray's words into a re-telling of his life, I wouldn't count it among the great documentaries. It's something of a Gray best-of and a feature-length CliffNotes to his life. The presentation is solid, but limited by the source material, while the extras maintain Criterion's standard of making their releases worth the investment. If you're going to watch just one performance by Gray, this Frankenstein construction will give you the widest view of the man, but it doesn't stack up to the power of his other works.