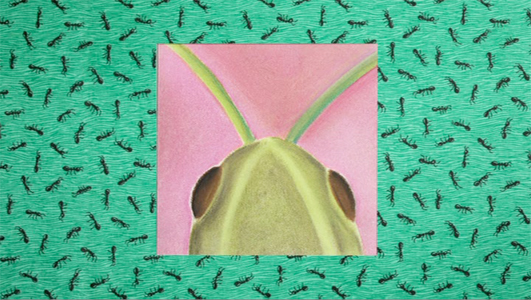 Microcinema's DVD Animated Films of Karen Aqua explores the work of a unique, passionate artist. Although Ms. Aqua had a bit of mainstream exposure when producing 22 segments for Sesame Street in the '90s, she was best known in animation circles as a generous educator and mentor whose bright personality carried over to the painstakingly drawn short films collected here. The thirteen short films on this disc show Aqua's evolution - and her love of nature, movement, color - in a program that spans from 1976 to 2011, the year she succumbed to cancer.

As if it wasn't totally obvious, Karen Aqua's films stray far from the usual cel-based, funny-gag animation formula into something more contemplative, organic, free-flowing and in tune with the rhythms of life itself. Abstracted human and animal forms, metamorphoses in nature, rituals, symbols and spirituality were constant themes in her work. There's also a lot of playfulness here, perhaps deriving from Aqua's favored medium of pastel and colored pencil on paper, which gave much of her work a child-like, Sesame Street-esque vibe long before she contributed to that institution. In 1976's Penetrailia, a human figure is seen running across a desolate landscape, a massive human form whose giant dilated pupil serves as the figure's diving pool (trippy!). 1982's Vis-Á-Vis concerns a pair amorphous roommates, two halves of the human psyche who ultimately complement each other when one goes off on a tropical vacation. Vibrant drawings in constant motion comprised her main forte, but occasionally she moved into other mediums such as stop motion (1984's Yours For The Taking stars a three-legged ceramic teacup) or collage (Perpetual Motion, a 1992 fantasia of time-keeping as practiced by many civilizations throughout history).

Aqua's diagnosis of cancer in 2001 had an understandably huge impact on her films, which became more intricate and accomplished as a result. The first film she did after learning her condition, 2001's Afterlife is an atypical, cathartic piece which uses live-action footage of animals in nature to address both her own fragile state and the September 11th terrorist attacks. Issues of human survival are also at the heart of 2009's Twist of Fate, which uses x-rays, MRIs, pills, charts and other imagery to examine our love/hate dependancy on contemporary medicine. For the most part, however, Aqua's films continued the organic, life-affirming themes from the earlier films. This is never more evident than in 2004's Andaluz, a beautiful, kinetic exploration of the nature and native culture of Southern Spain made with fellow animator Joanna Priestley and musician Juanito Pascal. The constant mutation of life itself is given a sweet, visually resplendent treatment in her final film, 2011's Taxonomy, which is furnished with a lively soundtrack from Aqua's frequent musical collaborator, Ken Field. 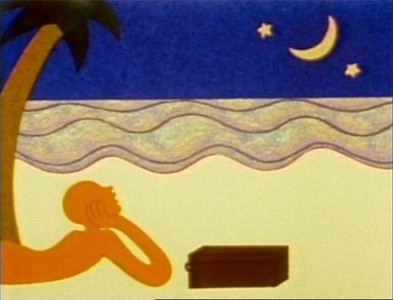 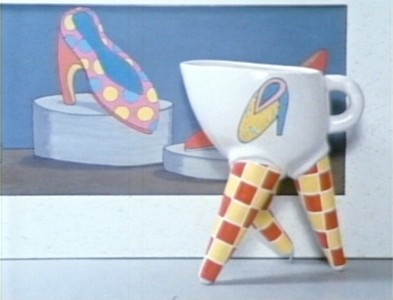 Animated Films of Karen Aqua is presented in a simple, fuss-free manner by Microcinema that is thankfully free of promos and other distractions. The "play all" feature makes it ideal for educators, animation students, art lovers, or anybody with a desire for some groovy backup imagery to play during a party. The DVD's contents are as follows (descriptions are from the disc's packaging):


Penetralia (1976; 4 minutes)
A person's internal journey to the penetralia, the innermost place.
Heavenly Bodies (1980; 3 minutes)
An astronomical love story.
Vis-Á-Vis (1982; 7 minutes)
An autobiographical fantasy depicting the duality of an individual torn by conflicting desires. A reflection of the reconciliation between work and the creative imagination.
Yours For The Taking (1984; 7 minutes)
A 3-legged cup embarks on a journey, filling itself with images and impressions of its surroundings. Combining 2-D and 3-D artwork, this film is done with replacement animation, using 45 fired-clay cups.
Nine Lives (1987; 7 minutes)
A fortune teller's cards lead the viewer on a journey through time and collective memory, using the metaphor of a cat's multiple lives.
Kakania (1989; 4 minutes)
Urban chaos meets tribal ritual.
Perpetual Motion (1992; 5 minutes)
A shrine to ritualized time. This film celebrates the cyclical nature of time, and the symbols and rites which have been created to mark and honor its passage.
Ground Zero / Sacred Ground (1997; 9 minutes)
In South Central New Mexico, an ancient Native American petroglyph site lies 35 miles from the site of the world's first atomic bomb test. The juxtaposition of these sites points to the striking contrast between the two worlds that created them.
Afterlife (2001; 4 minutes)
The aftermath of September 11th is addressed in a lyrical awakening to the parallel between the personal and the universal, through metaphors drawing from the landscape of Central Florida. This video explores feelings of uncertainty, fear, facing the unknown, and acceptance.
Andaluz (2004; 6 minutes)
A traveler's love letter to Andalucia, this film in an homage to the culture, landscape and architecture of Southern Spain.
Sensorium (2007; 5 minutes)
A study of sound/motion synthesis, inspired by dance gestures and movements found in nature (water and tide pools). An alphabet of abstract animated and musical gestures combine in various configurations to create a lush magnetic rhythm.
Twist Of Fate (2009; 9 minutes)
Expresses the transformative experience of being diagnosed with a life-threatening illness. Exploring this emotional and physical landscape, the film visualizes an internal world, imagined on a cellular level.
Taxonomy (2011; 4 minutes)
The animal, vegetable, and mineral kingdoms reside in a state of constant flux, reflecting a world of transience, mutability, and impermanence, through the metaphor of transformation. This film explores themes of malleability, instability, and interconnectedness. 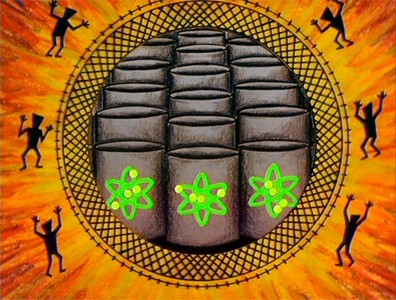 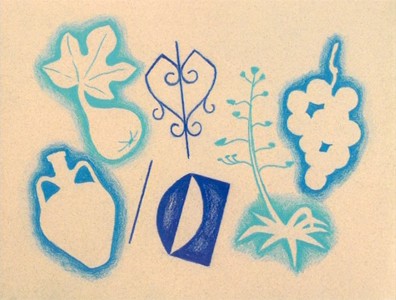 Microcinema's DVD presentation of these films are generally quite good, with vivid colors and a sharp transfer. The '70s and '80s-era films are sourced from prints that show various signs of fading, blur and dust. All of the films are shown in 4x3 full screen except for Taxonomy, which is in lovely anamorphic widescreen.

Although the earliest films are in flat sounding mono, most of the offerings on Karen Aqua sport great sounding stereo soundtracks that utilize music in a vitalizing way. No subtitles on these dialogue-free shorts.

If you fondly recall when PBS used to show funky animated shorts as time fillers, or the edgy goofiness of MTV's between-the-videos promos, you would enjoy Animated Films By Karen Aqua. These hand-drawn, beautifully done meditations on nature and our ever-shifting state of being resonate much more deeply than the average Sesame Street segment, however. Recommended. 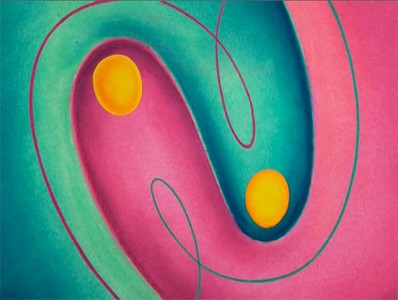 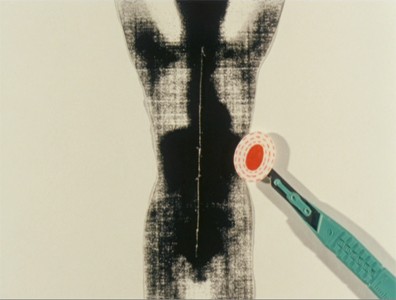