Warner Bros. // PG // July 10, 2012
List Price: $19.98 [Buy now and save at Amazon]
Review by Stuart Galbraith IV | posted July 26, 2012 | E-mail the Author
I'd seen the medical thriller Coma (1978) once before, not during its original theatrical run but soon thereafter, and didn't think very much of it at the time. Probably I was expecting something closer to medical science fiction (which, technically, this also is), that rare sub-genre in which Coma's director, Michael Crichton, got his start as the author of the bestseller The Andromeda Strain. Coma's posters and other advertising suggested a different sort of film as they ghoulishly displayed lifeless, naked bodies suspended midair by wires.

Watching it again after so many years, I was very surprised at how intelligent and effectively it still plays even now. In some respects it's timelier than ever and, despite a couple of missteps along the way, for me generated palpable suspense even though I already knew how it would end.

Warner Home Video released this on the same day as three other '70s/'80s sci-fi catalog titles: Brainstorm, Outland, and Altered States. Coma, the oldest of the batch, is in extraordinarily good shape, and the high quality of this high-def transfer no doubt added to the film's effectiveness. 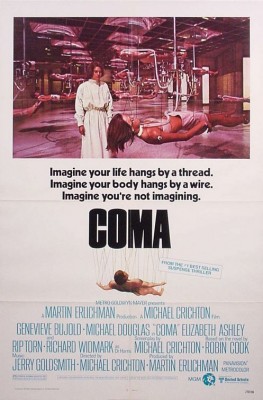 The story follows Dr. Susan Wheeler (French-Canadian actress Geneviève Bujold), a surgical resident at Boston Memorial Hospital. She's in a relationship with another doctor, Mark Bellows (Michael Douglas), but he's too entrenched in the political jockeying among the doctors for her tastes, and he tends to be condescending and sexist toward her, though he's largely oblivious of this.

Susan's best friend (Lois Chiles, Moonraker) is admitted for a routine abortion under general anesthetic, but against all odds she winds up brain dead. Susan is devastated by this and, looking for answers, finds some irregularities in her medical charts. A few days later another seemingly healthy man (Tom Selleck, in a minor role) in for a simple knee operation, also dies in the same operating room, a statistical near-impossibility. This only further spurs her surreptitious investigation.

She begins snooping around the hospital late at night, eventually learning that an improbably high percentage of young healthy patients suffered brain death on the operating table, all of whom in their comatose state are eventually shipped off to an austere long-term medical facility, the Jefferson Institute. Susan becomes convinced Chief of Anesthesiology Dr. George (Rip Torn) and possibly others are involved in some sort of conspiracy, but Mark, who may be involved as well, and Chief of Surgery Dr. Harris (Richard Widmark), remain dubious.

Coma is a solid, not-quite-but-almost airtight thriller. Bujold's character is smart and sensible except toward the end, when she makes two very stupid decisions that damage an otherwise very credible thriller.* These two actions undercut the protagonist's normally logical actions, and who the rest of the time is one of the strongest, most believably capable female characters in movies of this type until Clarice Starling in Silence of the Lambs. Bujold delivers a fine performance and is well cast. Her physical features at once project vulnerability and a scrappy indefatigability, exactly right for the part.

The film's other major asset is its clinical authenticity. Although Crichton's later ER and other TV shows set much higher, more realistic standards for medical dramas, back in 1978 audiences weaned on Medical Center and Marcus Welby, M.D. were simultaneously fascinated and horrified by the medical verisimilitude here, which is still powerful stuff even now. In one scene an anesthesiologist explains general anesthetic in a forthright manner even the layman can understand, while autopsies and other medical procedures are presented realistically and matter-of-factly. Both Crichton and the author of the original novel, Robin Cook, had medical backgrounds that serve the film well.

The film is built around timely issues I won't give away here, but in several respects Coma is prescient. It might even play better today than it did in 1978, though it was a big hit in first-run.

The other performances are generally good. Michael Douglas, despite co-star billing, really isn't in the picture all that much, and for nearly the entire film his character as written is pretty unflattering. Besides Selleck, Ed Harris has a similarly small role; it was his film debut. Jerry Goldsmith wrote the film's memorable score, which adds considerably to its overall effectiveness.

Although slightly overlong at 113 minutes, it's still Crichton's best film as director (though Westworld is more audaciously entertaining) and it's the second-best Crichton-related feature after The Andromeda Strain (1971), director Robert Wise's adaptation of Crichton's novel.

Coma's 1080p transfer (1.85:1 on the packaging, 1.78:1 full-frame in reality) is unexpectedly good, the spherical Panavision/Metrocolor production free from damage, color fading, and other age-related issues. The image is more than reasonably sharp and the colors spot-on. I was quite pleased. Some sources state this had some release in (presumably) magnetic stereo, but the Blu-ray is DTS-HD Master Audio 1.0 mono only. Included are a dubbed-in-Quebec French track (with Bujold dubbing her own voice, one hopes), and a Spanish track, along with subtitle options in all three languages. Though not listed on the packaging, German audio and subtitles are also included.

The lone extra is a spoiler-filled trailer in so-so condition, possibly bumped up from SD, that's best avoided until after you've seen the movie.

* Spoilers: After a harrowing escape from an assassin at the hospital, conveniently locking him, his gun and silencer in a cadaver freezer, instead of immediately calling and waiting for the cops to arrive - he can't get out, after all - instead she makes a beeline to Mark's apartment. Later, after another escape, this time from the Jefferson Institute, instead of calling the Feds (among others) she privately visits Dr. Harris.