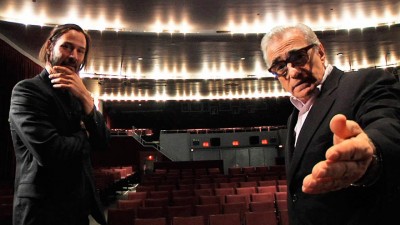 The motion picture itself has been an attractive subject to documentary filmmakers for years, but Side by Side may be the most "inside baseball" movie-about-movies to date--and that is its strength. Ostensibly a look at the current struggle (and transition) between traditional photochemical film and digital moviemaking, it is actually an exhaustively detailed "state of the cinema" thesis. For those of us who care about this stuff, it's a fascinating 100-minute think piece; the arguments are well articulated by exactly the voices you want to hear from. Writer/director Christopher Kenneally only falters when he tries to open up the tent.

He presents his film as a mixture of history lessons, personal testimonials, and op-eds. The key, provocative question, posed early, is "Is it the end of film?" No one's talking about the end of film as an art form--what we're contemplating is the place of film as a physical medium, as the method of recording, editing, exhibiting, and archiving motion pictures. That was the norm for nearly a century, until two key events occurred around the turn of the century: indie filmmakers started using digital video cameras for their low-budget films, and George Lucas began working with Sony to develop a workable, film-like digital camera for his Star Wars prequels. Suddenly, the paradigm was shifting.

This is into the weeds stuff, and that's admirable, even virtuous; I, for one, appreciated the explanations of how the chemistry of film actually works (it's just sort of magic, I always assumed), the question of "dynamic range" in the digital image, the old promotional films of the first CCD chip from Bell Labs in New Jersey. What's slightly befuddling about the film is that, at least in its early sections, Kenneally's narration seems to talk down to a wide audience that, let's face it, probably isn't seeing the movie. It is probably safe to assume that anyone who's bought a ticket to a feature-length summation of the pros and cons of photochemical filmmaking probably doesn't have to be told what a director of photography ("or 'DP'") is.

And it must be noted that Reeves is not the greatest choice for a narrator, for all of the reasons you could probably guess at from his body of work. (Let's face it: the dispatching of heavy information is not the guy's forte.) But he's a surprisingly credible interviewer--a good conversationalist, he's warm and engaged, and gets into the spirit of the thing admirably. (One must also pause to delight in the melodious way that Lynch says his interviewer's first name.) He also gets some great bytes out of his all-star cast: Digital booster Soderbergh, on his first exposure to the digital RED camera ("I really felt I should call film and the phone and say 'I met someone"), Scorsese on letting go of your final product ("The real auteur is the projectionist"), and especially Nolan's regular cinematographer and never-say-die film-over-digital proponent Wally Pfister, who carves out a nice niche for himself here as Hollywood's youngest curmudgeon.

The questions asked in Side by Side are vital, timely, and pressing for cinephiles; for the general audience, maybe not so much. Kenneally's documentary might have been a touch stronger had it embraced its inner egg-head and worried less about leaving out the casual moviegoer. As it is, though, it's brisk, lucid, and a lot of fun.