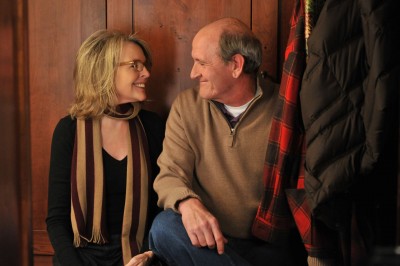 It's been nearly a decade since Lawrence Kasdan's last film, and for good reason--it was the disastrous Dreamcatcher. In the intervening years, I'd all but assumed he'd turned over the family business to his kids (son Jake has put together an extensive body of film and television work, while son Jonathan just had a picture at Sundance). But here's a new film, Darling Companion, written with his wife Meg, and featuring the kind of enviable ensemble cast that he made his name with in films like The Big Chill, Grand Canyon, and I Love You To Death: Diane Keaton, Richard Jenkins, Dianne Weist, Elisabeth Moss, Mark Duplass, Sam Shepard, and (of course) Kevin Kline. That's a fine cast, and the film is handsomely photographed in Colorado and Utah. It's all so nice. Too nice. Deathly nice.

The story: Keaton and Kline play a long-time married couple with two grown daughters. Keaton discovers an abandoned dog by the freeway and rescues him. She keeps the dog, which she names "Freeway"; daughter Olsen keeps the vet, whom she marries a year later at the family's vacation home in the Rockies. (We are given this information via the following on-screen text: "One year later. Beth and Joseph's vacation home in the Rockies.") But Freeway runs away while Joseph is out walking him, because of course he's chattering on his cell phone. (What did screenwriters ever do to convey self-centeredness before cell phones?) So the whole family heads out to the woods to find the pooch, blowing their dog whistles and shouting "Freeway!"

Look, there's no need to get too worked up about this movie--it is, as I realized when Bonnie Raitt's "The Thing Called Love" crept onto the soundtrack for the first living-with-the-dog montage, a movie by, for, and about old yuppies. There's nothing offensive about that. But it's all so plinky and vanilla, everyone so calm and rich and white; it's a rare movie where James Newton Howard's customary syrupy score actually fits the lives onscreen.

None of that might matter, even, if the Kasdans' script was sophisticated or funny, which it mostly is not. The conflicts are obvious and overstated; Weist's character demands of Kline's, "Do you have to be so one-dimensional?", but she doesn't mean it in the way she should. Most of the dialogue is squarely on the nose, with fine actors like Kline forced to spew thumbnail character sketches like "I know you love the dog. You don't think I've noticed that you care more about him than ou do about me?" When you've got lines like that, there's nowhere much to go, subtext-wise.

The script often plays like a first draft: a few funny lines, several scenes that are incomplete to a point of inexplicablity, and not a helluva lot of nuance. Kasdan's directing seems rusty, too; he's shooting with the RED camera (when Dulpass wanders into the first scene, the combination of a video image and that particular actor made me wonder for a moment if Kasdan had gone mumblecore), and like some older filmmakers using professional video for the first time, he overshoots, seemingly because he can; scenes are chopped into so many close-ups that he has a tough time getting a rhythm going, either within scenes or between them.

What value Darling Companion has (and it has some) is in the performances. They can't do too much with this script, but most find a quality, or at least a moment or two, to play up: Shepard's craggy charm, Weist's earthy sensuality (no, really), Duplass's shambling likability. Keaton puts a sharp spin on some sketchy lines, and Jenkins gives the picture a shot of much-needed vulgar energy. (Of course, everyone else thinks he's totally gauche.)

Darling Companion will probably appeal to at least a portion of the older audience it's pitched at, and it's an easy movie to like: harmless, pretty, agreeable. But it's impossible to escape the feeling as it unreels that there's an awful lot of talent being wasted here.