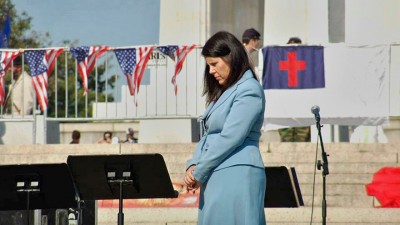 The ideological antagonists facing off in Scott Thurman's bracing documentary The Revisionaries may not agree on much, but they could certainly concede this: today's political battles, contrary to the narratives that take hold on the national stage, are very much being fought on the local level. The culture wars aren't being fought on the presidential campaign trail--they're being fought over the "personhood" bills in the state Senates, the union-busting initiatives in the Wisconsin state capital, and at the hearings of the Texas State Board of Education. Thurman's film gets a front row seat at the latter, where the teaching and textbook standards were bitterly fought in 2009 and 2010, determining exactly what Texas students would learn about science and American history--and consequently (due to the state's powerful influence over textbook manufacturers) how those topics would also be taught to students across the country.

Thurman focuses on a pair of activists/influencers from each side of the conflict. School board president Don McLeroy is a Sunday school teacher and young-earth creationist (he proudly states his belief that the earth is 10,000 years old, and that man walked with dinosaur); during the debates over the validity of evolutionary theory, he announces that "Somebody's got to stand up to the experts!" (He later uses it as a rallying cry at Tea Party gatherings.) Fellow board member Cynthia Dunbar is an associate professor of law at Falwell's Liberty University; she appears at a prayer rally and, via prayer, implores God to "invade our schools."

On the other side is Kathy Miller, head of the church-and-state separation group Texas Freedom Network, who believes it's all about politics: "Governor Perry has found a way to use the Board of Education to keep his base here in Texas happy." And there is Ron Wetherington, anthropology professor at Southern Methodist University, who sees the debate as "a mixture of ignorance and arrogance" that is "combustible."

The first half or so of the film concerns the battle over science standards in spring of 2009, where the question of removing the pejorative language regarding "strengths" and "weaknesses" of evolutionary theory gave way to a head-spinning round-robin of hand-wringing, examination, close-reading, and politicking in the room. The footage from these meetings and testimony is riveting, as board members on both sides of the issue parse words, sling accusations, and try to undo and redo each others' actions via endless, dizzyingly detailed amendments.

After that skirmish, a shake-up finds McLeroy out as president, but still on the board (his reelection campaign is wisely used as a rough framework for the back hour or so). He's an affable guy, and certainly blessed with the courage of his convictions, but just when he starts to seem a sympathetic figure, the debate over the history books gets underway--and freed of the less-active role of president, McLeroy is seen entering an astonishing list of proposed amendments that amount to Republican propaganda. (This is the stuff that made national news back in 2010.)

But those contradictions are healthy, and part of the film's power; it is a bitterly fraught issue, and as presented here, it is also a genuinely involving debate. There aren't as many easy answers as you'd think, no matter where you line up, and The Revisionaries must be commended and applauded for being not only thought-provoking but fair. And infuriating, at least for this viewer. It would be dishonest to claim that your own politics won't enter into the issues at hand, and it is probably too much to hope--considering the current level of both political discourse and political stubbornness in this country--that it will change any minds. But these are important issues, and this is an engrossing, well-crafted documentary.