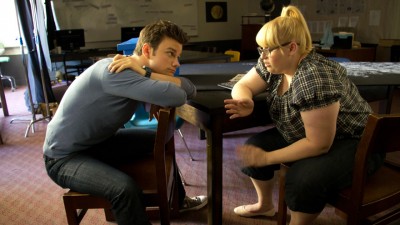 The snappy opening scenes of Brian Dannelly's Struck by Lighting are so fast and funny, they might lull you into thinking the entire movie is going to run at that speed. It opens with the title event, as Carson Phillips (Chris Colfer) is zapped with a lightning bolt in the high school parking lot; he then narrates own funeral, which includes an acoustic guitar rendition of "It's So Hard to Say Goodbye to Yesterday." ("Aaaaand my funeral sucks"). He walks us back to his childhood as a know-it-all kid, raised after his father's abandonment by his harried single mom, played to perfection by Allison Janney. (Failing to assemble the plastic Christmas tree during their first solo holiday, she tosses the pieces and announces, "Screw it--if anybody asks, we're Jewish.")

So far, so good. We join Carson in his senior year, where he is the editor of the under-staffed and unread school paper; he's also wildly unpopular himself. He doesn't care--he can't wait to get out of his small town, and is eagerly awaiting his acceptance letter from Northwestern. His guidance counselor points out that his school paper work might not be enough to crack that tough school, so she suggests he start a literary magazine. He decides to crack the staffing and circulation problem by using the dirt he and his friend Malerie (Rebel Wilson) have accumulated to blackmail the popular kids into contributing.

Struck by Lightning was written by star (and Glee cast member) Chris Colfer, who is 21 now and was presumably at least a couple of years younger than that when he penned it. Simply put, it plays like a movie written by a teenager. Most of the adults have precious little dimension--they get a tic or affectation and pretty much ride it out--and just about everyone in it, of any age, speaks in shopworn clichés. ("I'd soon learn that when it rains, it pours" is an example; there are many others.)

Most importantly, and most damagingly, Colfer's youth wrecks havoc on the film's sense of perspective. I'm not talking about details, though there are some shocking inaccuracies; I'm 99% sure that a school paper requires a teacher and/or faculty advisor, but the film acts as though Carson runs the whole show, while the giant plot point hinging on a college acceptance later willfully ignores the fact that it's 2012 and major universities tend to also email.

No, what's more problematic is how the film feels about Carson himself. He's a smart kid, sure, but he's also smug and mildly insufferable. Is the screenwriter (and, more importantly, the director) aware? Will there be some sort of awakening or turnabout wherein he sees that his tantrums and self-righteousness cause more trouble than they're worth--as in, for example, the (far superior, and strangely similar) 2009 Tribeca high school newspaper comedy Beware the Gonzo? This viewer, for one, kept waiting for the acknowledgment that Carson was actually a giant pain in the ass, that his superiority complex was, at the very least, less than awesome to be around.

That moment never arrives. Colfer gone so far in his presumption of Carson-as-hero, he even goes and martyrs him at the beginning/end. What he doesn't seem to know--either because of age or maturity, which are two very different things--is that his hero is, through much of the film, an unlikable blowhard, and that disconnect undoes the picture. (Also worth noting: Carson's sneering at the gay kids he's blackmailing is pretty off-putting, especially considering that the movie presumably got made because of his association with a "family"-friendly TV show.)

If Struck by Lighting flails as a smart-ass comedy, it sinks when it tries to get serious in the third act, with lines like "Thank you for being the perfect example of something I refuse to become!", soulful shots of Carson sitting on a beach as the sun sets to a Coldplay knockoff, and poor Janney being forced to deliver a "You shouldn't be so quick to judge" speech that's a long way from Sorkin. She gives that speech to Christina Hendricks, who manages to find some subtext in her thin role and give it some depth; Janney, it should be noted, gets a raw breakdown at the end that's mighty powerful, even if the movie hasn't earned it. Oh, and Rebel Wilson (the roommate in Bridesmaids) pretty much steals every scene she's in. But that's not always that tough to do. Struck by Lightning clearly fancies itself a snazzy high school comedy in the mold of Clueless or Heathers or director Dannelly's Saved, but those films are way out of its reach; instead, it's mostly just snide and unfunny and forgettable.