Zen of Bennett, The 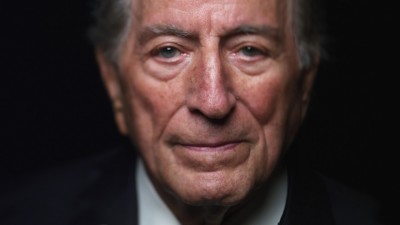 "I love to sing and paint," says Tony Bennett, "and as far as I'm concerned, I've never worked a day in my life." There's a reason he's remained such an enduring presence on popular culture, why he had a giant hit MTV Unplugged album when he was pushing 70, why far younger performers like Lady Gaga, Carrie Underwood, and John Mayer lined up to sing with him on his Duets albums. It's not just that he's an incredible singer or a big star--there are plenty of those. It's that he is, and always has been, cool. It's an intangible, indescribable, yet inarguable quality; some people have it, and some people don't. Tony Bennett has it. Unjoo Moon's documentary The Zen of Bennett is about many things: his life, his family, his musicianship. But it is mostly about that quality, and how it manifests itself in his life now.

"I love what I do," he says, "and my ambition is to get better as I get older." The film is full of these little aphorisms, bits of wisdom that he's accumulated over his 85 years, and the filmmakers (director Moon, and Bennett's son Danny, who is credited as "creating and conceiving" the project) allow him plenty of opportunities to dispense them. The film is roughly organized around the recording of his Duets 2 album, but it's not just a bland, "making of" proposition; it is about the man, and while those scenes show the man at work, the more fascinating footage is centered on the man inside himself. The interviews are plentiful, but (if memory serves), Bennett is not once seen as a talking head addressing the camera. Instead, his interviews treat him almost as work of art, using his interviews as voice-over for stylized B-roll of the man at home, at work, at rest. It's a brilliant move, because he's such a great subject from even a purely visual point of view--that face, with so much character, that demeanor with such confidence and presence. The cinematography by the great Dion Beebe (Chicago, Collateral) all but glistens with knockout lighting, inventive compositions, and evocative imagery; the crooner is as much an optical fetish object as the food in Jiro Dreams of Sushi.

"Here I am going on 85 this year, and I can tell you I have a lot to learn." Whenever possible, Bennett records live to tape, with his musicians and his duet partner all in the same studio, laying down the track all in one go. It's a different experience for many of the performers who join him in the film: Norah Jones, Michael Bublé, Willie Nelson, Aretha Franklin, Underwood, Mayer (though Bublé tells him that he's adopted the same method for his records). The interaction between the legend and the up-and-comers is especially fascinating to watch; Bennett and Gaga, in particular, make for a delightful little two-act. The most heartbreaking footage, however, is his session with Amy Winehouse (it was her last time in a studio). Talking about her before their meeting, he tells a friend sadly that "she's hooked," and insists "I'm gonna try to talk her out of it." The scenes of them recording are, in many ways, hard to watch; she's struggling, both with nerves and with whatever substances are making her so jittery and scattered. To calm her, he tells her a story (he's always got a story) about Dinah Washington, whom she reminds him of. Winehouse, in the scene's most chilling moment, replies, "She died so young, right? She wasn't even 40."

"I was taught never to compromise... you should do every move that you make with quality." Though the Zen of the title is accurate, and his talk of learning something every day is genuine, he's also a guy who is somewhat stubborn and set in his ways. He can get a little persnickety, as he does when he's left cooling his heels at Andre Bocelli's, or when he disagrees with a choice that's been made about an arrangement. "Why can't we do it like I do it on the stage?" he asks, not unreasonably, and it doesn't come off as bratty or obstinate; he just knows what he wants. ("Too many chiefs, not enough Indians," he mutters, at the end of the discussion--which he has won.) That dedication to doing it right is what makes those scenes of collaboration such a joy to watch; he's the consummate professional, and he's also surrounded himself with people who know how to get the results he's looking for, without having to raise his voice. Many of them are family; all seem to be friends, and a session will occasionally even pause for a moment while he knocks off a sketch of one of his duet partners. ("David Hockney told me to use these pencils," he explains, and of course he did.) The entire atmosphere is charming, mellow, low-key, and that feeling seeps into The Zen of Bennett as well. You just want to bathe in the warmth of his glow, to soak up the vibe in those rooms, to find this life as much a treat as he does. What a lovely film this is.