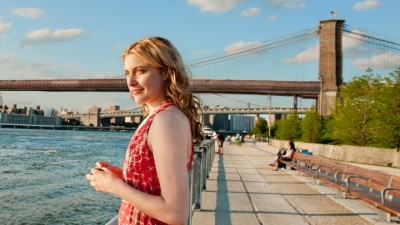 "I know that change is inevitable," admits Lola (Greta Gerwig) in the opening narration of Daryl Wein's Lola Versus, "but what if I don't want things to change? What if I like my life exactly as it is?" You can't blame her; at 29, she's got a handsome artist fiancée with a killer rent-controlled loft, and she's close to completing her graduate school dissertation. Good friends, good guy, good life--and then she comes home from a busy day of wedding planning and finds her husband to be (Joel Kinnaman) sitting on the couch with a look of stern worry.

Wein cuts from that to Lola, crying, alone; he skips the break-up scene, because we've seen enough movies not to need it. Familiarity with the broad strokes of a story like this is a challenge going in to Lola Versus, which concerns a pretty young neurotic who bottoms out while trying to bounce back, only to discover that she must love herself before she can love anyone else. But if there's anyone up to the job of smashing through that familiarity, it is Wein and his co-writer (and the film's co-star) Zoe Lister Jones; together, they made 2009's Breaking Upward, the most enjoyable romantic comedy in many a moon. And as that film was the story of a couple's protracted break-up, they would seem the perfect fit for a story of post-division angst.

And let's be clear: there are long sections and multiple components of Lola Versus that work, and well. The character of Lola is a keenly drawn one, charming and zizzy yet capable of truly awful choices, which the script doesn't apologize for; we all do the inexplicable sometimes. She struggles, and improvises, and does the best she can ("I'm slutty but I am a good person!"), and when she has a meltdown, she has a meltdown: two-fisting 40s, downing shots and wings at a strip club, getting yanked off the stage by a bouncer. But Wain and Lister-Jones don't end on the comic note; they play the pain too, of the aftermath of that scene, or her tears after break-up sex, letting the reality of those moments push the narrative forward.

It also helps to have such an inherently likable actor in the role. Gerwig has plenty of great moments, many of them on one of the funniest bad dates in recent filmdom, but the actor should primarily be applauded for managing to make the character sensitive and damaged yet not irritating. Lister Jones plays her best gal pal, Alice, and while she may not have written herself the lead role, she gave herself all the best lines (her "I learned everything I know about being a woman from 90210" speech is a peach). Hamish Linklater's energy compliments Gerwig's nicely, and any movie with the sense to cast Bill Pullman and Debra Winger as her parents get a slot of slack from this viewer.

Although the performances are fun and individual moments are memorable, Wein ends up sticking too close the playbook to approach the greatness of his previous film; for the third time in two days, for example, I found myself watching a Semi-Obligatory Lyrical Interlude in a 2012 film (seriously, is there no more inventive way to show a couple getting together?), and he allows the feel-good, new-age messaging to get entirely too explicit in the third act. Lola Versus is likable, and plenty funny--it is a perfectly serviceable romantic comedy. It's just a shame it doesn't transcend the genre more, particularly since its makers are clearly capable of doing just that.