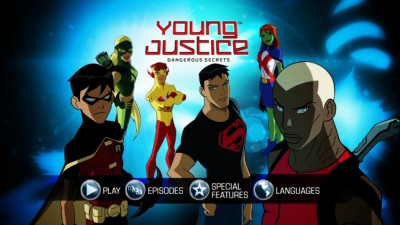 Well, someone at Warner Bros. got the memo that consumers want more complete sets when it comes to TV shows, and rather than releasing the second half of Young Justice: Season One as another trio of individual discs with a handful of episodes, they have put the last fourteen together as a two-disc set and dubbed it Season One, Part Two. No more waiting months between DVD releases to find out what happens next, you can charge through the whole thing in one go. And at a reasonable price, to boot.

This new set picks up where the Season One, Volume Three disc left off. (Oh, I get it: those are volumes now, this is a "part." Ooookay.) The Young Justice team--Kid Flash, Aqualad, Superboy, Miss Martian, Artemis, and Robin--who formed their own crimefighting unit when they decided the adults in the Justice League were treating them with (pardon the pun) kid gloves, have faced their first internal crisis: their assigned mentor, Red Tornado, had turned traitor, and now it appears Aqualad might have known something was up. First they couldn't trust the grown-ups, and now they can't trust each other?

Young Justice: Season One, Part Two's episode list runs the gamut between individual adventures and ones that contribute to the overall story arc of the season. There is a greater threat lurking out there, an ongoing conspiracy, that doesn't so much as extend beyond the one-off villains the kids encounter, but encompasses them. In this cycle of episodes, the bad guys include the Brain and Monsieur Mallah; the Injustice League; Parasite; Bane; Riddler; and some terrible guy named Harm who has an insufferable shtick where he constantly makes references to "doing harm" or any other way he can think to work his name into a sentence and refer to himself in the third person (ruining an otherwise super fun Halloween episode). There are also cameos by Captain Marvel, Zatarra, Guardian, Dr. Fate, multiple Green Lanterns, Kirby's Forever People, Jack Faraday, Plastic Man, and others, in addition to the regular Justice Leaguers we've already seen, like Martian Manhunter, Green Arrow, and Batman. Zatanna, Rocket, and Captain Marvel become unofficial team members, as well. And is that a young Beast Boy we're seeing in the episode "Image"? 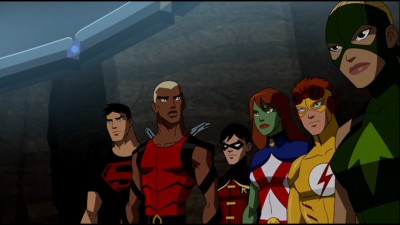 The real puppet masters behind the conspiracy actually get revealed in the second episode on DVD 1, the appropriately titled "Revelation." This is a big action showcase, with the full Justice League going up against the Injustice League (which includes Joker, Black Adam, Poison Ivy, and others) and the Young Justice team in the middle. The consortium of bad guys continues to manipulate from behind-the-scenes in key episodes, including a rather ingenious show at the end of disc 1 ("Misplaced") where Clarion the Witch Boy leads a magic circle and casts a spell that splits the world between adults and kids, neither of which realizes they are fighting side-by-side with the others in parallel versions of their world. Though the overall tone of Young Justice is light and fun, the series also doesn't shy from dark issues. The kids are shaken up by visions of theirs and the Justice League's deaths in one episode, and in another, Kid Flash is asked to run a heart transplant across the U.S. and must face the prospect of failure ("Coldhearted"). There is also the budding romance of Miss Martian and Superboy, and how it affects others. Tied to that is the ongoing question of trust amongst the team, not knowing if there really is a mole, as Sportsmaster told Aqualad previously, and if so, who it is. This gets more complicated as the season progresses, with Red Arrow joining the squad with the express purpose of rooting out the traitor. Artemis, Miss Martian, and Superboy all have secrets, however, that will prove to muddy the waters, leading to big revelations for all three in the penultimate episode, "Usual Suspects."

This makes way for the action-packed and star-studded finale, "Auld Acquaintance," which completes a lot of what Young Justice set out to do in its inaugural outing. In particular, in establishing the teens as more than sidekicks, they are pitted against their mentors. The battle sequences are pretty kick-ass, as they are throughout the season. If there is one thing to be said of Young Justice, it's that the showmakers are rigorous in maintaining quality across the board. Animation, writing, action--it all conforms to a particularly high standard for serialized cartooning. With Young Justice: Season One, Part Two now also boasting a better packaging routine, finally the home video releases meet those standards, too. 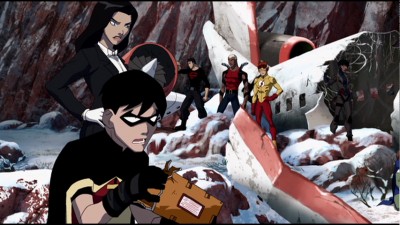 Video/Sound:
Young Justice: Season One, Part Two keeps the specs from the other sets: widescreen image and a Dolby surround audio mix. There are no complaints here. Both the picture and the sound have a lot of punch, with strong colors, sharp resolution, and a bombastic volume level.

French, Portuguese, and Spanish dubs are also available in stereo, as are Spanish and Portuguese subtitles and English closed captioning. No French subs, and note, that even though the Portuguese mix isn't listed on the box, it is there on the disc.

Episodes can be chosen one at a time, or there is also a play-all function. The 14 shows, each about 22-minutes long, are spread over two discs. They are packaged in a standard-sized case with a double tray. 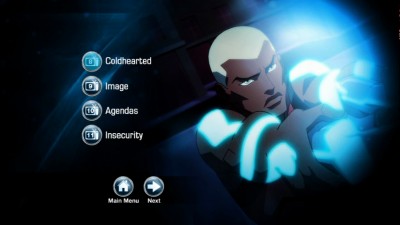 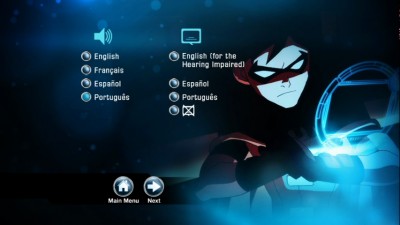 Extras:
A new Young Justice "digital comic" is included, which is less of a digital comic in the sense of other digital comics (i.e., something you read on a mobile device) and just a regular comic book broken down to be read on your TV screen.

FINAL THOUGHTS:
Young Justice: Season One, Part Two ends the first season of shows on a high note, paying off on all the investment viewers put into the previous episodes. The story idea of the one-time teen sidekicks of the Justice League coming into their own was more than just a core concept, but the show producers had a plan to actually portray them growing and changing. The underlying criminal plot that has informed much of the first year comes to a head, all the while holding up an excellent standard for animation and action/adventure storytelling. Better yet, Warner Bros. has finally gotten on the ball and started releasing bigger sets, rather than parsing out handfuls of episodes a disc at a time. Finally, I can give a Young Justice DVD the rank of Highly Recommended.