Please Note: The images used here are taken from promotional and other sources, not the Blu-ray edition under review. 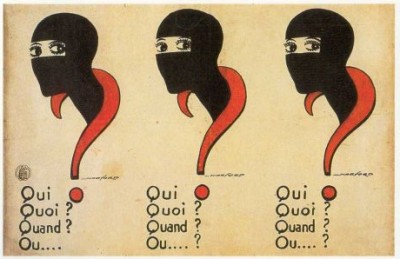 Long before there were "comic book movies," and indeed, some time before comic books really became what they are today, French filmmaker Louis Feuillade was making silent film serials that predicted the best of true comic book storytelling. His films Fantomas and Judex told stories of masked figures getting involved in impossible adventures; silver-screen epics broken into episodes, released over a period of time, with each new chapter escalating the peril. These lengthy soap operas were pulp fiction for the cinema set.

In addition to those films, Feuillade also made Les Vampires, a ten-part movie released over the course of 1915 and 1916. Now considered one of the crowning achievements of early moviemaking, Les Vampires is a salacious crime picture, full of twists and turns and a deliciously freeform sense of storytelling. It can be rickety at times--there is definitely a downside to the "anything can happen" ethos--but it's also addictive, each segment ending on a note that makes us want to know what will happen next. Feuillade is anything if not a master of cliffhangers.

The hero of Les Vampires is Philipe Guérande (Édouard Mathé), a reporter for Paris' leading newspaper. Guérande has been working a long-term assignment, trying to expose the inner workings of an underground criminal organization that goes by the name "Les Vampires." These are ordinary hoodlums who use masks and secret identities to pull all manner of crimes. They are not the supernatural bloodsuckers the name implies--sorry, no Draculas here--but they do employ extraordinary techniques and deadly gadgets to get their work done. Feuillade also flirts with Stoker-like imagery. For instance, one segment involves a ballet dancer whom Guérande is engaged to. She is dancing in a production that dramatizes the sordid lives of the Vampires, and thus puts her in their cross-hairs. Her costume, based on one of the actual villains of the piece, looks every bit like a bat-winged succubus, and her murder is carried out in a particularly macabre fashion. Feuillade was giving the horror fans a knowing wink. These evildoers have taken on this name for a reason.

Of all the varied elements of Les Vampires, the facet that has found a permanent place in pop culture is Irma Vep. The name is an anagram for "vampire," and she is both a cabaret performer and the top lady crook in the Vampires organization. Played by one-named actress Musidora, Irma Vep came to embody the image of the vamp, a particular kind of femme fatale--though vamping also means to play up certain seductive traits, to exaggerate one's own sense of desirability, much as Musidora does in the film. Her black body suit, the one mimicked by the ballerina, would inspire many larger-than-life ladies that followed, fictional and otherwise, and the character would be paid homage in other movies, on album covers, and, of course, comic books. (Most notable, Olivier Assayas' Irma Vep with Maggie Cheung.)

Despite the revered critical status that Les Vampires has acquired over the last century, it's necessary to note that it is an imperfect effort. The lengthiness of the film, which on one hand makes it such a fascinating cinematic endeavor, can also be its downfall. Individual sequences feel drawn out, with the acting in particular overemphasizing things that the audience is likely to grasp much quicker than Feuillade apparently anticipated. The performance style in Les Vampires often veers very close to the cliché that comes to mind when many think of silent film. Édouard Mathé in particular is exceedingly demonstrative and seems to be mugging for the camera, displaying the kind of exaggerated pantomime that his better contemporaries learned to avoid.

That said, there is still so much to like about Les Vampires, it's easy to ignore its faults and just go with it. The ridiculous scrapes that Guérande finds himself in pile on one after the other. Each new chapter brings more colorful characters, as well as regular visits from the comic relief, the silly but charmed Mazamette (Marvel Lévesque), with his seemingly endless string of children and the equally endless string of jobs to pay for them. He is like the Wimpy to Guérande's Popeye. And, of course, the true appeal of Les Vampires is the cliffhanger stylings, the way Feuillade teases out the suspense, leading the viewer through the pretzel-like plot with both confidence and, despite the aforementioned laboriousness, an invigorating spontaneity. There is always a sense of discovery at work in this tale, and the fun is in sticking around to see how it all pans out. Will the rival gang ever get the upper hand and take out the Vampires? Will Guérande ever expose the full story? And what of Irma Vep...? Hit the next button, go to the next chapter, it's the only way to get your answers! 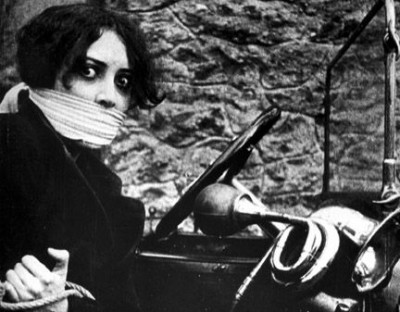 Video:
Kino brings Les Vampires to North America on two Blu-Ray discs, 1080p, MPEG-4 AVC encoded. The "picture boxed" presentation is framed at a 1.29:1 aspect ratio, and the transfer was made using the Cinemateque Francaise restoration from 1996. The image quality is excellent, despite some obvious scratching and other flaws that appear from time to time. The overall resolution is very good, with a clear image and no real instances of jagged lines or ghosting.

The print here is mostly in black-and-white, with a blue tint used for scenes that are supposed to take place at night or in darkness (the blue even comes on and off with the turning on and off of lamps and other light sources). This may cause some complaint from silent film devotees, as Louis Feuillade's original color design was, reportedly, more elaborate, including amber and green for daylight scenes, exterior and interior, and a lavender color for scenes set in lower-light. I suppose there could be an extended debate regarding the importance of the tints and the whys and wherefores of leaving them off; I have no answer for you on that front. I personally didn't have any problem enjoying Les Vampires as presented, and despite your personal preference in the matter, this appears to be the best way to get the material and you're probably better off sucking it up instead of waiting for someone to release a tinted edition. (There is an old Image DVD that apparently keeps the color scheme, but it is also reportedly inferior to more recent releases.)

The double-disc set comes in a standard-sized Blu-Ray case with a cardboard slipcover.

Sound:
Les Vampires on BD is accompanied by a score by the Mont Alto Motion Picture Orchestra. It is mixed as a 2.0 track and it sounds very good. The music enhances the film well without overpowering it. There is good synergy.

New title cards show the text in English, and they are simply designed and have a vintage feel.

Extras:
Outside of a trailer for Fantomas, none.

FINAL THOUGHTS:
Louis Feuillade suspenseful movie serial Les Vampires is a real treat. It's pulp fiction brought to life on a cinema screen--over six hours of colorful criminals, wooden do-gooders, and outrageous acts of malice and evil. Though some of the aesthetics are certainly out of date, the fun to be had here is in getting caught up in the sensation. The massive plot will keep you guessing from one episode to the next, and you'll want to find out what happens to the alluring Irma Vep and all the rest. Kino's restoration looks great on Blu-Ray, making for an important addition to any cinephile's movie collection. Highly Recommended. 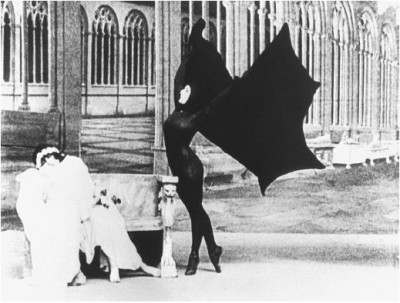