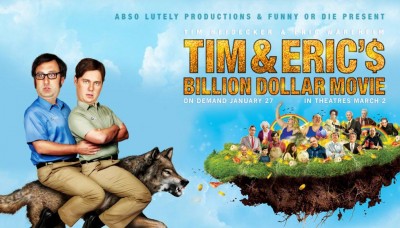 There are some movies that make you say, "What in the hell was that?" I had this feeling for all 93 interminable minutes of Tim and Eric's Billion Dollar Movie, one of the least funny "comedies" I have ever seen. Tim Heidecker and Eric Wareheim had a show on Cartoon Network's Adult Swim - Tim and Eric Awesome Show, Great Job! - for a couple of years, and apparently have enough fans to get this movie made. John C. Reilly, Will Ferrell, and Zach Galifianakis all show up to embarrass themselves as Tim and Eric's bizarre humor falls flat time and time again.

Tim and Eric use $1 billion of the Schlaaang Corporation's money to make an awful short film with a fake Johnny Depp, and flee town to avoid the corporation's angry henchmen. The guys see a commercial in which Damien Weebs (Ferrell) offers $1 billion to anyone that can run his floundering mall. Interested in saving their own lives, Tim and Eric decide to accept the job. Inside the mall are kitschy stores, a deadly wolf and a drug-addicted homeless man, Taquito (Reilly), who works for Weebs. Tim and Eric begin restoring the mall to its former glory, and hilarity ensues.

Maybe I just don't get this brand of humor. I have never seen Tim and Eric's Cartoon Network show, but this film is unbelievably bad. There's not an ounce of wit, comedic timing or purpose in Tim and Eric's Billion Dollar Movie, which the guys also direct. I'm all for broad comedy, but this is something else entirely. Tim and Eric both talk like they're six years old, and appear to have the talent of the bottom-of-the-barrel stand-ups that open an amateur comedy night. If I didn't know better, I'd say they were attempting to create a gross parody of their Funny-or-Die idols' YouTube videos. Of course, nothing on screen is ever funny.

What the hell Ferrell, Reilly and company are doing in this movie is anyone's guess. Maybe they like Tim and Eric, who are probably nice guys, and the film is a Funny-or-Die production. I guess someone better plan a funeral. Ferrell has been coasting for a while now, and he adds little to this project. Reilly nose-dives toward career oblivion as the sniffling, shrieking and gesticulating Taquito. Yes, this is the same man whose strong work in Chicago and The Hours received much critical praise. Galifianakis is another permanent mall dweller who dies defending shoppers from the wolf. This all feels like someone called in a huge favor.

The out-there jokes in Tim and Eric's Billion Dollar Movie might be funny at 4 a.m. if you're high as a kite, but even that is a stretch. Random, rapid-fire humor can be funny; these guys just aren't doing it right. It feels like Tim and Eric tried so hard to make something beyond funny that they completely overlooked the fact that their methods are flawed. The sex jokes and the stupid wolf and the clueless vagrants in the mall are just too much. I wanted to laugh, but the chuckles never came. Tim and Eric apparently have a bunch of celebrity fans that stumped for this movie. They don't need my support, and they are not going to get it.

The production values are about as fancy as the film's crappy mall, but Tim and Eric's Billion Dollar Movie actually looks pretty good on Blu-ray. The 1.78:1/1080p/AVC-encoded transfer is expertly detailed, as it was shot with the increasingly popular Red One digital camera system. There are plenty of low-fi accents and the lighting is often harsh, but skin tones are accurate and colors are well saturated. Black levels are solid, and there are no major compression issues.

The 5.1 DTS-HD Master Audio soundtrack is also strong, and supports the film's zany sound design with ease. The awful dialogue is always easy to understand, and there are a number of effects that pop up in the rear and surround speakers. The cheesy score is rich and deep, and some dance music makes the subwoofer rattle. English SDH and Spanish subtitles are available.

This one-disc release from Magnolia Pictures arrives in a standard Blu-ray case. A shiny slipcover is included and replicates the front cover art. If you hated the movie, you'll probably hate the Audio Commentary with Tim and Eric, but the guys at least try to explain the methods behind their madness. The Deleted Scenes (8:53/HD) and Extended Scenes (18:26/HD) are about on par with the rest of the film, and Good Evening S'Wallow Valley (8:25/HD) is a parody EPK-style featurette. The Interview with Tim and Eric (22:26/HD) goes on about twenty-two minutes too long, and not much useful information is found in HDNet: A Look at Tim and Eric's Billion Dollar Movie (4:06/HD). Masochists might enjoy the Shrim Dance Screensaver (an unending loop/HD) and the Promo Video$ (17:15/HD). The extras conclude with a Poster and Photo Gallery, the Theatrical Greenband Trailer (2:22/HD) and the Theatrical Redband Trailer (2:31/HD).

I don't have any more words to give this movie. please Skip It.