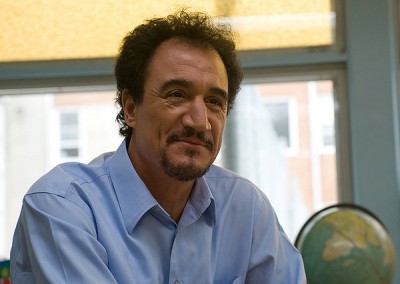 If you're anything like me, when a mention of a new movie about an inspirational teacher pops up, you immediately stop listening and let your eyes wander to the next title on the marquee. Yeah, yeah, I know. Children are our future, and stories that celebrate the possibilities of learning and camaraderie will make for a better tomorrow. I get it, I really do--but I'm old. I have no future.

Thankfully, all the talk that surrounded Monsieur Lazhar for the past several months (it played in Portland, where I live, until just a couple of weeks ago), finally got the better of my cynicism, and so I decided to give this French-Canadian film a spin at home. It was an Academy Award nominee, after all, and at the least, I should try to keep up with those, just so I can be smug at parties and poo-poo popular opinion.

Except no poo-pooing here. Philippe Falardeau's Monsieur Lazhar is a solid little drama, filled with fully realized characters and avoiding the regular clichés of most classroom stories. It's not a tale of underprivileged, unruly children being given a leg up by an uncommon educator; rather, it's a story about disparate people coming together and bonding over the shared experience of loss and learning a little bit about how to get along as a result.

The single-monikered Fellag plays Bachir Lazhar, an Algerian refugee seeking asylum in Montreal. After reading the news of a teacher who killed herself in her middle-school classroom, Lazhar goes to the school to apply to take over the position. He was a teacher in Algiers, and he loves kids. Since the principle is having a had time finding anyone else willing to take over the difficult situation, she gives in and gives the man a chance.

Lazhar's methods as a teacher are different than what the kids are used to. He is more structured, preferring order to chaos, and he's more demanding. His first assignment is dictating Balzac to them in order to gauge their language skills. Memories of the previous teacher haunt the children, especially the two who saw her body hanging from the ceiling. Alice is a sweet child, but one with a lot of gumption. She is having trouble with Simon, who himself is troubled. He is aggressive both in humor and action, and there are rumors a story he told about the teacher is what drove her to suicide. These kids are played by Sophie Nélisse and Émilien Néron, both of whom are excellent. They avoid the mannerisms and cutesy tics of the usual Hollywood moppets. They are real kids, feeling real pain.

As Lazhar struggles to get his footing as a teacher, he also struggles with how to get the children to express themselves and deal with what is happening to them. The school's approach is typically touchy-feely--though, in this modern world, literal touching must be avoided. (There is a particularly good scene where the teachers argue this, and how these rules affected their deceased colleague.) Lazhar wants to cut through that and be honest. Part of his motivation is that he is dealing with grief himself. What none of the other teachers know is that he lost his wife and family when he immigrated, they were never able to join him. It's one of a few secrets he harbors, and for reasons that become clear as the movie develops, keeps to himself out of necessity. Yet, the children sense his honesty, and they respond to him.

Monsieur Lazhar is very much Fellag's movie. Casting the teacher is essential to any classroom drama of this kind, even moreso than the kids. It's quite often a flashy role, and why big actors are drawn to it. It's Oscar bait. Robin Williams got to jump up on his desk, Michelle Pfeiffer got to wear a leather jacket! Fellag does neither. His is not a showy performance at all. Lazhar's mission is to be effective but not really be noticed. Expression for him is difficult, and so the actor makes use of small gestures. When Alice's mother compliments him, for instance, the actor touches his heart by way of a thank you and then awkwardly stands alone after she walks away. The quiet anxiety speaks volumes to the feeling she has stirred within him. Lazhar needs as much caring and understanding as his students.

All of which leads to a tidy, yet satisfying climax, one that is absent of the usual grandiose oratory or any kind of district competition or even standardized testing. Instead, Falardeau stays true to his instincts, and he ends on another of Lazhar's physical gestures--yet this one involving another person and establishing that connection they've been seeking for the entire film. 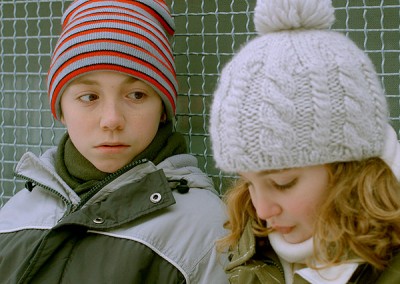 Video:
Music Box's presentation of Monsieur Lazhar is magnificent. The 2.35 aspect ratio picture looks remarkable in high-def, with deeply rendered colors and a striking level of detail. Lines are sharp, and skin tones and texture look natural without sacrificing any of the impressive cinematography. This is not a bold or flashy movie, full of big zooms or dizzying pans, but yet, in this format, Monsieur Lazhar manages to impress anyway.

Sound:
The original French soundtrack is mixed in Dolby 5.1 and sounds great. There is a subtle, immersive atmosphere, with good attention paid to background details. Dialogue is well modulated and easy to discern, and the (optional) French subtitles are evocative and evenly paced.

Additionally, there is a 2.0 version of the soundtrack.

Extras:
A handful of extras are included on the Monsieur Lazhar Blu-Ray, including the theatrical trailer and some more informative featurettes. This includes a half-hour sitdown (in French) between director Philippe Falardeau and writer Evelyne de la Cheneliére, who wrote the one-man play Falardeau based the screenplay on (she also plays Alice's mother in the movie). There is also a 20-minute Q&A with director Philippe Falardeau (in English) done before a screening, for what looks like a show of some kind called "Big Talk." We are also treated to the audition tapes from the young actors who play Alice and Simon, which are appropriately illustrative of why they were both chosen for the movie.

Finally, we get text versions of both "Bachir's Story" and "Alice's Report," the written materials the characters read in pivotal moments of the film.

FINAL THOUGHTS:
Highly Recommended. Monsieur Lazhar is a nice surprise. It's a feel-good movie that doesn't make you hate yourself for succumbing to it charms. Quietly played and smartly realized, this story of a fish-out-of-water teacher taking over a troubled classroom takes what could have been a standard school story down some unique and effective emotional avenues. Well-acted and intelligently written, Monsieur Lazhar is definitely an uncommon animal: a mainstream foreign film with genuine heart. It plays to regular themes that many imports also concern themselves with, including the plight of the immigrant, but without the hackneyed push-button approach that so many others indulge in.