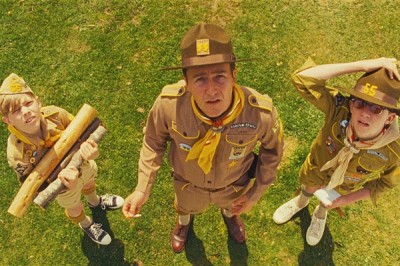 There may not be an active filmmaker whose work is so immediately recognizable as Wes Anderson's. You can walk into a room or switch over in the middle of one of his films and place it within seconds: the intricate production design, the symmetrical compositions, and the elegant tracking shots, lovingly panning from room and room and tableaux to tableaux. Some complain about the hyper-controlled aesthetic, the contained style, and say that his films are designed rather than directed, or that he's playing in the same dollhouses over and over again. Some of those people will no doubt surface for his new film Moonrise Kingdom and make that complaint again. You must not listen to them. They are bad people, and they want to keep this movie away from your soul, where it will take residence for ninety minutes and make you flutter.

It is the filmmaker's first period piece, though his pictures have always harbored a (presumably personal) obsession with the looks, sounds, and ephemera of the past. The setting is 1965, in "the land of New Penzance" (as narrator Bob Balaban explains from the bottom of the frame), an island off the New England coast. In three days' time, we are told, a storm will wreck the coast, which is poor timing, since Sam and Suzy have run away together.

Sam (Jared Gilman) is a Khaki Scout, disliked by the troupe members he is spending the summer with at Camp Ivanhoe. Suzy (Kara Hayward) feels similarly outcast with her family and at school, and when they locked eyes at a church pageant a year previous, their souls bonded. A pen pal-ship became long-distance longing, so Sam has swiped some provisions and two bedrolls, and Suzy has brought her favorite books, her kitten, and her brother's battery-powered record player.

None of the grown-ups charged with finding them are exactly ideal for the task. Scout Master Ward (Edward Norton) is a pleasant enough fellow--when he discovers Sam's empty tent, he announces, wide-eyed, "Jiminy Cricket, he flew the coupe!"--but naïve, and certainly in over his head. Captain Sharp (Bruce Willis) of the local police is dedicated but distracted, presumably by his slowly waning affair with Suzy's mother Laura Bishop (Frances McDormand). Mr. Bishop (Bill Murray) is, like his wife, a lawyer by trade, but he's long given up finding much of anything in his life worth fighting for.

Moonrise Kingdom is Anderson's second screenplay with Roman Coppola, after 2007's somewhat muted The Darjeeling Limited (Jason Schwartzmann co-wrote that script as well, but is only on hand here as an actor). That film is warm but slight, and it gives off the feeling that Anderson had some trouble developing the same kind of easy working relationship with his new collaborators that he'd enjoyed with Owen Wilson and Noah Baumbach. But whatever growing pains he and Coppola might have experienced on that picture have long dissipated; this is a smooth, engaging screenplay. The comic beats are precise are frequently hilarious, while the set pieces are constructed sturdily enough to make Anderson's directorial flourishes seem inevitable. They're doing some sly things with the narrative arrangement as well; the script masterfully withholds information (without seeming to) throughout the first half, and will then put the action on pause to fill in the background exactly when it's needed.

The two young actors who are playing--marquees be damned--the leading roles are both wonderful, in a very direct and gratifying and steadfastly unadorable way. Anderson casts Norton and Willis in ways that both capitalize on and undercut the baggage of their previous roles and personas, and both are better than they've been in years; it's particularly lovely to watch Willis putting some effort into a role again, creating a richly melancholy character and burrowing into it. Frances McDormand and Tilda Swinton are, well, Frances McDormand and Tilda Swinton, and I can't imagine why you have to be told that's a good thing. And while Murray is doing an off-shot of the kind of depressive mid-lifer he's made a specialty of for this filmmaker, he pushes past what he's done before, and mines a darker desperation--there's a moment where he asks "Why?" in a way that sums up all of his best performances.

As expected, the film is a pleasure just to look at; Robert Yeoman's camerawork is as elegant and graceful as ever, and the film has a dry visual wit that's a joy to behold, from the timing of entrances and exits within the frame to a perfectly executed sight gag with a trampoline. (And, yes, there is some slo-mo, but he saves it for just the right moment.) The stylistic devices are all here and accounted for, but as in his finest previous films (Rushmore, Mr. Fox, and Royal Tenenbaums), the style genuinely compliments the substance; everything in these characters' lives has been so neatly laid out and arranged and prepared, but inside, they're just falling to pieces. Moonrise Kingdom captures, as few films ever have, the thrilling flush of a first love (or crush, at least), but it also remembers the agony of pre-teen solitude, of feeling that you have no place, that no one understands you, or ever will. And then it notes, with some regret, that for some people that feeling never goes away.