Kino Classics Presents: The Devil's Needle and Other Tales of Vice And Redemption 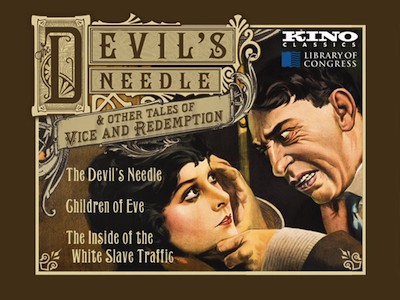 Kino brings together three early examples of exploitation films under the banner of The Devil's Needle and Other Tales of Vice and Redemption. The three silent movies, released originally between 1913 and 1916, profess a social conscience but wrap their cautionary tales in heightened melodrama. The results at best are more lurid than educational, straddling the line between being genuine social drama and a peek at the dark side of American culture.

The earliest film, The Inside of the White Slave Trade (1913; 28 minutes), pushes its credentials pretty hard, not just professing to be the work of a major sociologist, but one endorsed by his peers from one coast to the other. Directed and co-written by Frank Beal, The Inside of the White Slave Trade follows a procurer (Edwin Carewe) as he seduces a woman into spending a night with him, and then after she is "ruined," pretends to marry her before abandoning her and selling her to a pimp. The film professes to have been shot on actual streets where such activities take place, and indeed, was shot on location in New Orleans and Houston, though the legal hot water Beal and producer Samuel H. London got into years later calls into question any claims of true documentary.

The story itself is fairly average and predictable, though it is effective in showing the cycle of turnover in this kind of crime. Once one girl is arrested or falls out of favor, another is brought in. It's hard to tell how much more effective The Inside of the White Slave Trade might also be if seen in its complete form, as almost half of it is missing and seemingly lost for good. Though, I will say it's nice to see an unfavorable portrait of a pimp for once, given the disgusting appropriation of the term by pop culture in the last twenty years. What seems to be lacking is any real empathy toward the women who get enslaved. There seems to be some understanding of the psychology where "Annie" is broken down and becomes dependent on her pimp, but it also shows her returning to prostitution because retail work doesn't pay enough. That motivation is dubious, and the consequences underwhelming. 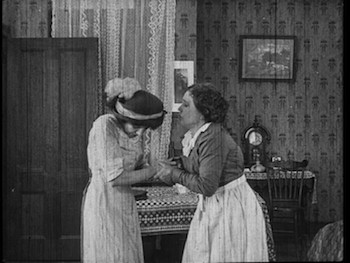 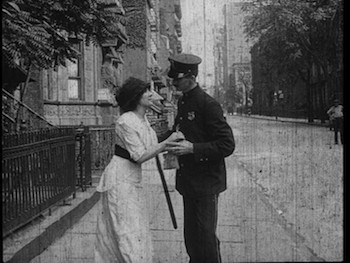 Children of Eve (1915; 73 min.) is a more developed, more straightforward melodrama. Designed as a vehicle for star Viola Dana, who was also the wife of director John H. Collins, the film uses a rather conventional narrative to highlight the poverty of the slums and unsafe working conditions in child labor sweatshops. The film begins in the late 19th Century. Robert Conness plays Madison, an upcoming industrialist who falls in love with his showgirl neighbor (Nellie Grant). His affection helps her turn her life around, but when she gets pregnant, she leaves him rather than ruin his reputation. The fallen mother dies on the street, and her daughter is taken in by a kindly old woman.

Jump ahead seventeen years, and the girl, Mamie (Dana), is a nightclub dancer hooked up with a two-bit crook nicknamed "The Gyp" (Tom Blake). Meanwhile, the lonely old businessman has now become a successful codger, running a cannery full of underage workers. Bert (Robert Walker), the nephew he has raised as a son, has become a Christian reformer who tries to get his adopted father to change his ways. Bert also meets Mamie, and his efforts with her are more successful. They are, of course, unaware of their family connections, leading to some bitter ironies. Her young appearance allows her to go undercover to inspect the conditions of the factory, leading to tragic results. Naturally, Madison sees the error of his selfish ways, even if it's too late. Even Mamie's old boyfriend gets his, ending up in jail shortly after Mamie rejects him.

The moralizing in Children of Eve is surprisingly undersold for a film with such a clear agenda. Bert is a well-meaning drip, taken more to quiet urging than forceful histrionics. Not surprisingly, the movie is at its most lively when Mamie is with her bad friends. The nightclub scenes are fun--if not only for the comical dancing in the crowd; talk about overacting!--and the circumstances under which Mamie and Bert meet are pretty amusing. Collins' major achievement is in the climax, however, when a fire destroys Madison's factory. Basing this on a real industrial tragedy from several years before, the director really goes for broke, burning down a building for real as actors playing firemen and workers stage their escape. It looks incredibly dangerous, making for a nail-biting penultimate sequence. 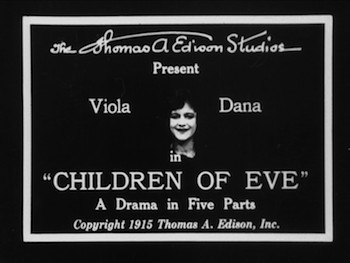 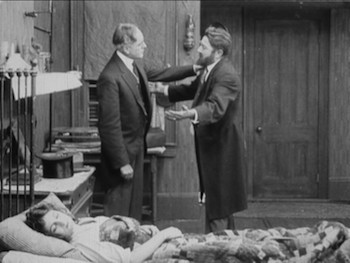 The best of the lot is The Devil's Needle (1916; 66 min.), which gets a considerable boost by featuring Norma Talmadge in the starring role. She has considerable screen charisma and is the most comfortable on camera of anyone on this disc. Talmadge plays Renee, an artist's model who picked up a morphine habit when she previously had the drug prescribed for nerves. Jealous when Minturn (Tully Marshall), the artist painting her, develops eyes for a little rich girl model (Marguerite Marsh), Renee convinces him to try a little "readymade inspiration." The plan backfires: Minturn steals the girl from her fiancé and her father, and he develops a full-blown addiction. Renee has ruined his life and her own, making it possible for him to marry her rival. Cut to a year later, and Renee is clean. She helps undo the damage she did to Minturn, though the fact that she still lives on the wrong side of town means there is danger lying in the shadows.

The Devil's Needle was directed by Chester Withey, his first of 33 directorial efforts. It's surprising that this is his debut, as it's easily the most accomplished of the trio presented here and benefits from having the most concise story. There aren't really any tangents, the narrative stays on track. Though Minturn's hallucinations are a bit silly, his getting strung out and jonesing for a fix is pretty harsh. He is a demonic mess. Talmadge impresses by going from opportunistic and conniving to sweet and caring. There is little surprise in the action-laced climax, and little in terms of consequences for a movie about the ravages of drugs, but it's still fairly entertaining.

Which is a pretty good way to sum up The Devil's Needle and Other Tales of Vice and Redemption. These aren't award winners, not by a long shot, but for film fans, it provides a glimpse at how early cinema approached controversial subjects. It's a long way from later drug movies, cautionary or otherwise, like Reefer Madness or Pineapple Express; the filmmakers have yet to find the less heavy, goofy side of getting high, nor have they fully embraced the darkness, and depending on which side of the moral divide you land, that could or could not make a difference in how you react to these silent curios. 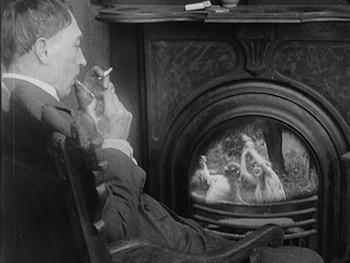 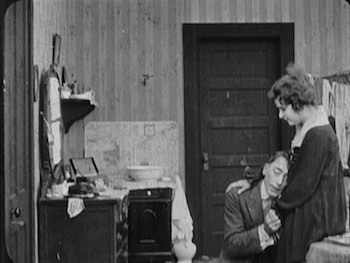 Video/Sound:
The three films presented here, released on one disc in a standard plastic case with a slipcover, are shown at a full 1.33:1 aspect ratio in black-and-white. The quality of the transfers varies, but really only depending on how beat up the source material was. White Slave Trade is the worst, with lots of scratches and tears. It also has the most missing. The Devil's Needle has one scene missing, and suffers from splotches and print damage. Children of Eve has the least noticeable problems--though all are completely watchable. The image is never so obscured as to be impossible to see.

Sound: All the films have new scores mixed in 2.0 for the DVD. The Inside of the White Slave Trade is by Ben Model, while the other two are by Rodney Sauer. All three are simple and effective, with good sound quality, and enhance the films well. They are mostly piano-driven, though Sauer includes trumpet on Children of Eve, including instances when an actual musician appears onscreen.

The Inside of the White Slave Trade's title cards are a mix of the original cards and newly created ones when the originals weren't available.


Extra outtake footage of Children of Eve is a fairly interesting 8-minute snippet of material from the fire sequence, showing some better views of the rudimentary "special effects" from the time.

The Inside of the White Slave Trade comes with a second version, showing the raw footage before it was restored. It clocks in at 19 minutes and is shown without musical accompaniment. It's an interesting demonstration of the work that went into restoring the films here, but by no means a necessary extra.

A small booklet inside the DVD case features liner notes by historian Richard Koszarski that sheds some light on the films contained herein. 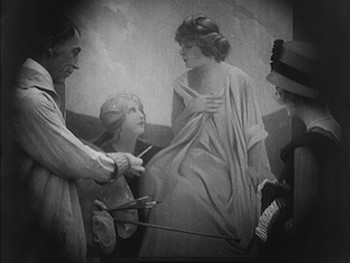 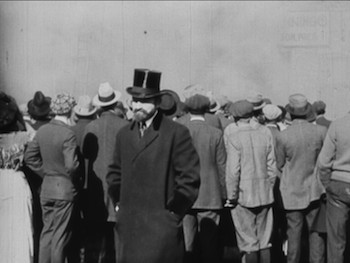 left to right: The Devil's Needle; Children of Eve