Fantastic Adventures of Unico, The

Discotek Media // Unrated // May 15, 2012
List Price: $19.95 [Buy now and save at Amazon]
Review by Stuart Galbraith IV | posted June 5, 2012 | E-mail the Author
The Fantastic Adventures of Unico (1981), simply called Unico (literally, "Yuniko") in its native Japan, was the first of two animated features about a magical baby unicorn. Based on a popular 1976-79 manga by the Walt Disney of such things, Osamu Tezuka, the movie was a co-production of his company and Sanrio, the folks behind the Hello Kitty franchise. Kitty-chan even makes a cameo appearance in this.

I confess volunteering for this dangerous reviewing assignment solely because I thought my four-and-a-half-year-old daughter would enjoy it, and indeed she did, though she did find the climax a little too scary for her tastes. Everything about the movie - the musical score, the character designs, even the main title - is incredibly dated, positively screaming early '80s throughout, though that also imbues Unico with an undeniable retro appeal.

More than anything though, this kind of Japanese anime leaves my western world sensibilities bemused. Plot, character, motivations, designs don't really line up with anything made by Tezuka's and Sanrio's Hollywood opposite numbers, which has some advantages and some disadvantages. I wasn't much impressed overall, but apparently both this and its sequel, Unico in the Island of Magic (1983), have garnered a small but loyal cult following beginning in the mid-1980s when both films were released to VHS in the U.S. (by RCA/Columbia) and occasionally broadcast on The Disney Channel.

Discotek Media's new DVD offers an excellent presentation of the film, in both its original Japanese language (with English subtitles) and English-dubbed versions. 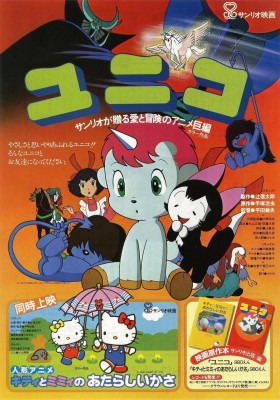 Unico (voiced in the Japanese version by Katsue Miwa) is endowed with the magical ability of, invariably, bringing happiness to others. However, The Gods, cartoony types superficially modeled after Greek Gods but who wear halos, decide Unico is making things too easy for people back on earth. After casually toying with the idea of killing Unico, they decide to merely exile him. They call upon the beautiful West Wind (guest star Chieko Baisho, Sakura from the "Tora-san" movies) to carry Unico to the Hill of Oblivion. However, feeling pity toward Unico, instead she deposits him in an equally lonely land inhabited by rambunctious Akuma-kun (Junko Hori), the unruly and orphaned son of the Demon of Solitude.

The two eventually become friends, but when Unico uses his magic granting Akuma-kun his own horn, and this in turn alerts the gods. Angry that the West Wind has defied them, they dispatch the less accommodating Night Wind (Ryoko Kitayama) after Unico. The West Wind, still feeling sorry for Unico, whisks him away to yet another sanctuary. (This initially makes the film appear jarringly episodic, but things come together in the end. In the original manga, the West Wind also wiped Unico's memory clean with each re-location, which seems a bit harsh.) In Unico's newest home he meets Chao (Kazuko Sugiyama), a self-absorbed, scatterbrained kitten longing to become a human girl.

Both Chao and Akuma-kun rubbed this reviewer the wrong way. Each is concerned only with immediate self-gratification at the expense of all else and overall they come off as intensely annoying with few redeeming qualities. One early scene has Akuma-kun causing Unico to slip and fall off a precipice into a tumultuous sea below where he nearly drowns. Akuma-kun responds to Unico's cries for help by yawning and deciding to take a nap. It's not clear if this is intended to be funny, or by example to teach Japanese elementary schoolchildren right from wrong. Either way, to my western world tastes it was anything but amusing.

The longer subplot concerning Chao and her relationship, in both cat and human form, with a lonely, somewhat doddering old lady (Taeko Nakanishi) is a bit more appealing, but the gentle charm of these scenes is crushed under the weight of an epic, climatic battle between Unico and a devilish, largely unexplained monster threatening Chao and the others.

Little, indefatigable Unico is sickly sweet in terms of design, with emblematically Japanese characteristics (e.g., enormous eyes often quivering with emotion) and to some degree he resembles Tezuka's earlier Leo/Kimba the White Lion. Nevertheless, the character's determination to make friends and be kind to others, no matter how rude they might be in return, is attractive.

The Fantastic Adventures of Unico, presented in its original theatrical aspect ratio of 1.85:1 (called VistaVision size in Japan) with 16:9 enhancement, is bright and attractive, with accurate color, detail, and contrast. Both Japanese and English audio are decent 2.0 mono tracks and the disc is region 1 encoded. The English version, incidentally, is fairly elaborate, including several of the songs rerecorded into English.

The only supplements are trailers for this and other Discotek releases.

Young girls and nostalgic anime fans are Unico's main draw, and for them this DVD delivers with a handsome presentation. For them it's Recommended.