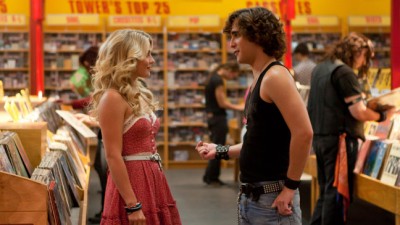 The primary problem with Rock of Ages, the guiding principle that defines not only its failure but its very existence, is that it is an artifact of pure nostalgia--that is, affection for the past, with no regard whatsoever for the actual quality of what's being invoked. Put another way: just because you remember it, doesn't mean it's good. Based on the jukebox Broadway musical, Adam Shankman's film is set on the Sunset Strip in 1987, using 26 songs from the era. The difficulty is that these were (for the most part) bad songs then, and they are worse songs now; the film's fatal flaw is that it never decides how it feels about that fact, or how to deal with it.

This is not music snobbery; your correspondent is a child of the '80s, and one who continues to love much of this terrible, terrible music. But there's the rub: this writer, like many of my generation (who are, presumably, a giant portion of the target audience for the picture), loves these songs ironically, which is a fine attitude to carry into a karaoke bar or an '80s party, but a problematic one for a giant, big-budget, all-singing, all-dancing Hollywood musical. It's hard to make a movie in air quotes. So the conundrum is that the filmmakers must either act like the songs are, in a traditional sense, good (which they're not), or they must acknowledge that they're bad, which results in a movie that's sneering at itself.

It's a dilemma that Rock of Ages never solves, which results in some numbers that are done straight and painfully serious ("Waiting for a Girl Like You," which is transformed into a love-struck duet in the style of "Tonight" from West Side Story), and some that are performed as parody ("I Can't Fight this Feeling" is now a coming-out song). Needless to say, the joke numbers tend to go over more successfully; you want to think the whole movie is a wink, but when the film's vapid, mannequin leads stare into each other's eyes and sing Foreigner like it's Bernstein, it's too big a joke to be intentional.

The other problem with nostalgia--and with Rock of Ages--is its lack of nuance, the tendency to lump all of an era's ephemera together, as if it were all interlocked, created and embraced by the same general populace. The culture of Rock of Ages is a kind of omnibus "80s," where everyone loves "rock and roll," which here encompasses everything from Journey and Starship to Poison and Warrant to Guns N' Roses and Bon Jovi. Trust me, I lived through the '80s: these bands did not share the same audience. The people who were fanatical about GN'R were not listening to REO Speedwagon. Nor, for the record, were they listening to "More than Words," which came out in 1991, but that's all part of the movie's Wedding Singer-style specificity--that movie, set in 1985, had a joke about the 1980 shooting of J.R. on Dallas; this one, though set in '87, has Donkey Kong gag (that game's popularity peaked a good four years earlier). Yes, yes, it's nitpicking, but as Mary Elizabeth Williams so eloquently noted, "when they make the movie about 2011 and the characters are talking about Friendster and dancing around to 'Milkshake," you'll care, Millennials. Oh, how you'll care."

But Rock of Ages approaches the era and its music as fodder, to be snapped up, mashed up, remixed, homogenized, and spit back out; it's the Gleeification of the Sunset Strip. The movie has plenty of other problems: its plastic, vacant leads and their painfully earnest romantic subplot (Julianne Hough is as wooden an actress as you'll see in a major motion picture, and Diego Boneta should be tearing tickets at a movie, not starring in one); the painful silliness of the production numbers; the interminable two-plus hour running time. And there are some saving graces, primarily the breezy supporting performances by Paul Giamatti, Alec Baldwin, Russell Brand, Bryan Cranston, and Malin Akerman. Most surprisingly, Tom Cruise swoops in somewhere around the forty minute mark and very nearly salvages the picture--he sings credibly, performs energetically, and crafts a funny and compelling portrait of the bullshit-spewing rock star. For a good twenty minutes in the middle, when he takes over, the movie actually, weirdly works (or at least seems to, after the all but unwatchable first act). It could be because he and his co-stars are very good. It could also be because that section is mostly music-free.