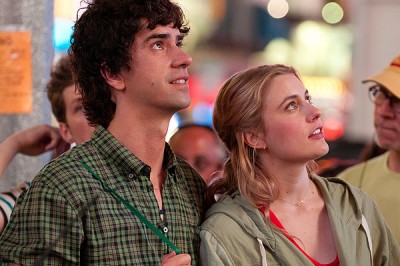 The indie romantic comedy is an odd subgenre, often detailing the lives of relatively well-to-do bohemian types who seemingly have little to worry about in terms of rent and a career and thus have more time to obsess over their personal travails. The four main characters in Lola Versus, for instance, are a painter, an actress, the lead singer in a band, and a graduate student writing about 19th-century French poetry. The latter is Lola, and she works, but it's as a waitress in her parents' restaurant, so her shifts appear to mainly consist of talking with her mom. Lola is played with the usual pluck but far less of the expected quirks by Greta Gerwig, recently so good in Whit Stillman's Damsels in Distress. She is just as fetching here, and also far more animated than we are used to seeing from her. It's getting easier and easier to imagine her in a mainstream vehicle if she ever chooses to go for it. (Arthur, which I never saw, notwithstanding.)

At the picture's opening, Lola is turning a tragic 29. To cheer her up, her boyfriend Luke (Joel Kinnaman, AMC's The Killing) proposes. She says yes. They spend nine months planning the wedding. Then he breaks it off unexpectedly. It's a hell of a plot set-up, and it's put together in the space of the opening credits montage.

The rest of Lola Versus, which is the brainchild of Breaking Upwards writing team Daryl Wein and Zoe Lister Jones--he also directs, and she plays Lola's best lady friend, Alice--consists of Lola dealing with the fallout of this decision, combating a broken heart and making some terrible choices. The ex-fiancé both attracts and repels, and their mutual best guy friend, Henry (Hamish Linklater, The Future), gets caught in the middle when Lola takes advantage of his long-stifled feelings for her. She also dates a random dude (Ebon Moss-Bachrach) with a really big shlong and gets advice from her dopey 1970s free-spirit parents (Bill Pullman and Debra Winger, both clearly digging the room in which these supporting parts allow them to roam).

There's a lot that works about Lola Versus. The narrative trajectory, including Lola's mood swings and screw-ups, is honest and unafraid of the messier aspects of a post-relationship spiral. There are plenty of good chuckles, as well as a couple of emotionally heavy scenes. The best stuff is when Linklater and Gerwig get to work alone. They prove to be evenly matched performers, with a winning chemistry that makes the audience really want their characters to get together. Even when she is mopey, Gerwig manages to be irresistible. 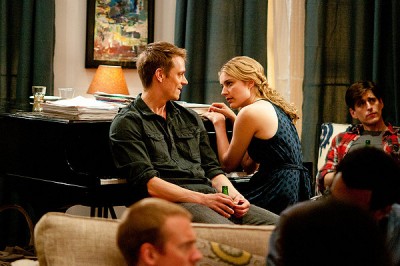 Unfortunately, the script for Lola Versus is not always as on point as in those intimate exchanges. Wein and Lister Jones throw in a few scenes of broad comedy (Alice on oxycontin) and make some bizarre choices that border on surreal (Lola breaking up with the dude with the big dick by reciting a monologue from The Godfather); the tone of this thing is all over the place. Some of the verbal exchanges are also too knowingly clever, and the writing eclipses the reality of the moment. This is particularly evident in the dialogue Zoe Lister Jones gives herself, though it might also be that she's outclassed as an actor by the rest of the cast. Her standing out as the obvious sore thumb reminds me of writer/director Jennifer Westfeldt's performance in her own Friends with Kids. Both scribes attract such excellent actors to their projects, they might be better off staying behind the camera.

Which brings us back to the start. It's hard at times to tell whether Lola Versus is satirizing a certain kind of privileged twentysomethings, or if the self-impressed writing is indicative of a limited scope of experience. It's kind of the Lena Dunham conundrum. As with Dunham's Girls (and also Westfeldt's Friends with Kids, but unlike Dunham's Tiny Furniture), Lola Versus gets past this problem by allowing for real vulnerability. While some of Lola's rock bottom is a little shticky, and her final epiphanies are played with the same speed as the mishaps that send her on her way, the genuine pain that informs the movie's center is affecting. A super tough edit job in the script stage, and Lola Versus could have been a hell of a movie; instead, it's a rather likable mess with a fantastic lead performance by a breakout actress. And for that, definitely worth your attention. 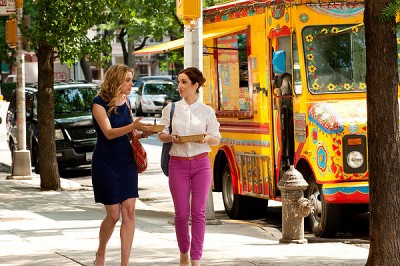