If you thought you were going to see only one action movie this year with a heroine adept with a bow and arrow, you were wrong. And whether you loved or hated The Hunger Games, or even if you were indifferent, it doesn't matter. Brave is its own thing, a completely different movie, and irresistibly entertaining.

Set in medieval Scotland, Brave is the story of Princess Merida (voiced by Boardwalk Empire's Kelly MacDonald), the first-born of King Fergus (Billy Connelly) and Queen Elinor (Emma Thompson). Merida isn't so much a tomboy as she is just a girl with her own mind who likes archery and her freedom. When the three clans in her father's alliance come visiting with their eldest sons ready to compete for the Princess' hand in marriage, Merida doesn't want anything to do with this out-of-date ritual. It doesn't matter if the peace of the kingdom relies on her following tradition, traditions are meant to change.

This latest from Pixar Animation is its own break from tradition. Brave is the first feature from the pioneering studio to boast a female lead. Sure, movies like The Incredibles or Wall-E had memorable women characters, but none that were front and center. Based on a story by Brenda Chapman, who also co-wrote the screenplay and directed the movie with Mark Andrews, Brave bucks convention from the word "go" and never relents in its efforts to tell a story that is every bit as inventive as the boy-centric Pixar flicks that came before. This may not seem all that important, unless you consider that, "traditionally," Hollywood studio execs have claimed that women can't carry action movies all by their lonesome. 2012 is the year those idiots should finally eat their words.

After the three princes try to show off their own archery skills for Merida, she puts them to shame and declares herself the winner of her own contest. She chooses none of them to be her groom. The political fallout from this unthinkable declaration threatens to throw the land into war, forcing Merida to seek more drastic measures. In true Pixar fashion, her rash decisions only compound, until Merida is in way over her head and scrambling to repair what she's undone.

It's hard to explain much more than that because Pixar has so far played this one very close to the vest. I wasn't aware of the comedic complications that were due to arise when I first entered the auditorium, nor was I fully prepared for the excitement that would come after. Once again, Pixar's legion of storytellers subverts normal structural conventions and lays out a complicated narrative that surprises and delights in its many swerves and hard turns. It takes a good half hour for us to find out what's really going on, and then the writers bury one emotional climax at the 3/4 mark, taking us off-guard when they hit the gas en route to a truly big finish. They kept the particulars from me, it's only fair that I keep them from you.

Instead, I will list the things I can say, the total of which should hopefully sway you toward seeing Brave:

* Merida is a great heroine who never needs the boys to come to her rescue.

* The film's design is excellent, creating marvelous environments, some of which, including the forest and the magical elements, evoke the best of Studio Ghibli.

* The various male characters provide lots of comic relief--the blowhard patriarchs, the awkwardly adolescent suitors, Merida's mischievous younger siblings--and yet the men get their due as genuine personalities. The humor is never mean-spirited.

* The sense of peril is legitimate. You will be on the edge of your seat as things get dangerous. It's also the kind of hero's tale that is inspiring. More than just Merida will be pushed to limits they never thought themselves capable of, rising to the challenge of the moment.

* Likewise, the emotional stuff is appropriately heartfelt and never overplayed. The mother-daughter bonding in the film provides many powerful moments, both happy and sad. Normally Pixar hit the daddy issues pretty hard, but Brave proves that parental conflict transcends gender.

* The animation is flawless, with the studio's usual superb attention to detail. One downside: though the 3D is elegantly employed in terms of how the Pixar animators create deep settings, the flaws in the projection and the plastic glasses obscure a lot of their hard work in unnecessary darkness. I am pretty sure Young MacGuffin had some amusing peach fuzz, but he was never in the light enough for it to be really clear.

* As one might expect, the voice casting is smart rather than flashy. Talk show host and comedian Craig Ferguson, Robbie Coltrane (Cracker), and Kevin McKidd (HBO's Rome) all round out the cast perfectly as the heads of the other clans. Emma Thompson is delightful, as well, and Billy Connelly manages the right sort of fatherly bluster. The movie belongs to Kelly MacDonald, though. She makes Merida a fun, likable girl without ever putting on a "little kid" voice.

* Sit through to the very end. There is a funny scene tagged on after the full credits.

I was lucky enough to take two of my friends with me to the screening, both women of different ages. They each loved Brave and were ecstatic to see a girl they could identify with kicking butt up on a movie screen. I also was fortunate to see little girls whose parents had brought them to the sneak preview jumping and kicking and imagining themselves as Princess Merida on their way out of the theater. And lest you think it's all about the ladies, most of the guys I saw leaving Brave were grinning just as much--including the ones who were still sniffling because the movie made them cry.

In other words, Brave may be Pixar's first movie with a girl in the lead role, but like all their other films, it's a movie that's been made for everyone. It's the epitome of the rating "General Audiences."

Also, in case you're wondering, yes, there is a new animated short that plays before Brave: Enrico Casarosa's La Luna. It's a magical little cartoon about the moon. I was as moved by it as I was the main feature. Don't show up late! 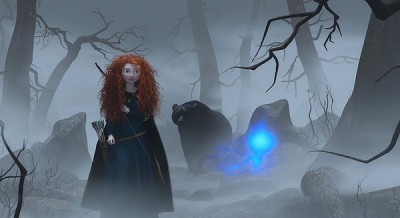