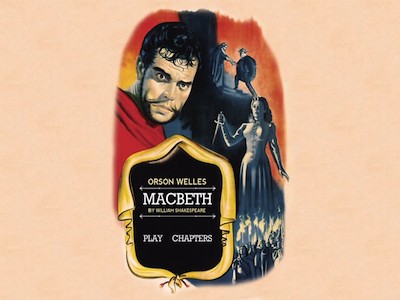 Fans of Orson Welles tend to be as obsessed with the lore surrounding his films as they are with the films themselves. Particularly with later endeavors, post-The Magnificent Ambersons, when every new project was a struggle to get to screen. There were the years of shooting Othello all across Europe, and of course the many different versions of Mr. Arkadin, not to mention all that went unfinished and unreleased. Perhaps my favorite, however, is the story of how he wrangled his production of Macbeth, almost literally, by shooting it at night on a set that, during the day, was used for B-westerns. To compensate, Orson built bizarre, impressionistic sets, establishing his version of the Shakespeare play in an alternate reality all its own. By comparison to Othello, the whole production was committed to film in just three weeks.

I recently told this story to someone I knew, and her response was, "Well, that explains a lot!" Macbeth is anything if not a strange motion picture. It is surreal and primitive and delightfully imperfect. The production is a clear act of madness, one on par with the insanity that takes place within the story. It's the kind of thing only an artistic maverick can make work. In Orson Welles' hands, a shoestring became a daring trapeze.

The Scottish Play, as Macbeth is alternately known, is somewhat of a gothic murder mystery--though without the mystery. We know that Macbeth (Welles) and his wife, Lady Macbeth (Jeanette Nolan), concoct a scheme to commit regicide and take over the throne. They are spurred on by the murky prophecy of three witches, and to take care of business, Macbeth must betray his friends, murder children, and basically transform himself into a tyrant. Haunted by their crimes, both husband and wife go crazy. 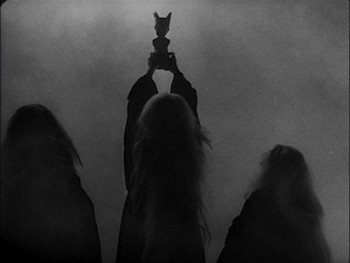 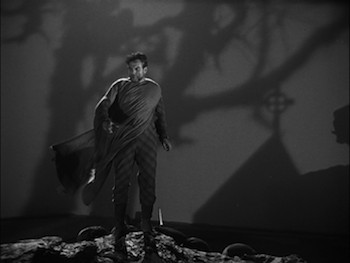 I say haunted on purpose, because in addition to the magic of the three witches, Macbeth also sees ghosts. The spirits of the men he betrays return to torment him. Or he's just losing his mind. Welles plays up on this, and his Macbeth is a spooky horror tale. The rocky walls of his cavernous sets box Macbeth in, trapping him at the crime scene. The sky is dark, and thunder claps echo in the distance--though regularly without the lightning that follows--and the wind whistles through the corridors of the royal caves. The fabric of the plot takes on elemental proportions. Everything in this Macbeth is exaggerated. Welles shoots from low angles and casts ominous shadows on the walls. He frames actors in extreme close-up so that it feels like we are eavesdropping, particularly during the monologues, which also dissolve into hallucinations. Sound effects are unreal and unrecognizable. When King Macbeth finally does take the throne, it is oversized and perches him high above his people. Is this but a dream? And if so, is it a delusion brought on by the witches and their smoky brew, or is it a product of Macbeth's paranoia?

Welles has a tendency to be a bit of a ham, but he keeps his propensity of overdoing it well modulated here. The famous "is this a dagger I see before?" me soliloquy is delivered as a whisper, with the director saving his blustery temperament for when the fever truly grows hot. Jeanette Nolan, making her film debut, is fantastic as Lady Macbeth. Her devious, thoughtful performance stays away from anything resembling comical evil, making her slide into dementia all the more disconcerting. She's too together to fall apart like that. The scene of her suicide is pretty shocking. Welles pulls off one of the best falling body special effects I've seen in classic cinema. Likewise, the eerie lead-in to the climactic battle, with Malcolm's army advancing on the castle while camouflaged, looks fantastic. In Welles' world, Christian mysticism is as much about hocus pocus as the witches and their black magic.

In terms of cinematic Shakespearian adaptations, Macbeth is easily one of the oddest. It's an imperfect picture, but it's a bold one, and is an essential part of the Orson Welles' canon. Its breathless escalation to the frenzied finale is a desultory rush, and one I'm glad has finally found its way to DVD. 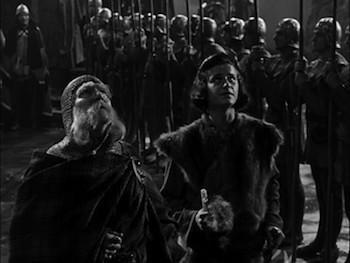 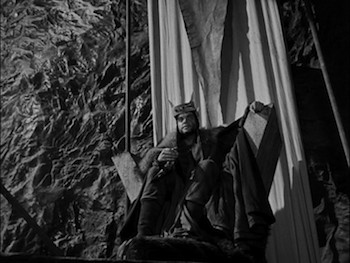 Video:
Olive's transfer of Macbeth, shown in a 1.37:1 aspect ratio, is pretty good, though not great The upside is that the black-and-white picture is sharp and the overall resolution is solid. Balances look good, with nice blacks in what is a pretty dark movie. The downside is the source material has plenty of scratches and marks. It's a strong presentation for a film that didn't get a full restoration, but it could still use a good scrubbing.

Sound:
The mono soundtrack is clear and has nice volume. I didn't notice any extraneous noise or hiss. The dialogue can be hard to understand at times, but this is a fault of the movie, not the disc. Welles tended to pre-record the dialogue and have the actors lip sync, and he often overdubbed voices himself (listen, you'll here his stentorian tones creep in on different characters). This makes for a sometimes odd mix, which isn't helped by the accents or the general complexity of Shakespeare's language.

FINAL THOUGHTS:
One of the strangest films from one of cinema's largest legends, Macbeth is an oddity amongst the library of Shakespeare-based films, but its mad genius is intoxicating. Welles stages the Scottish play in a surreal landscape, decking his royal personage in furs and surrounding him with rocky walls. The director and star makes the most of a small budget, turning his limited means into a world of delusion and nightmare. Highly Recommended. 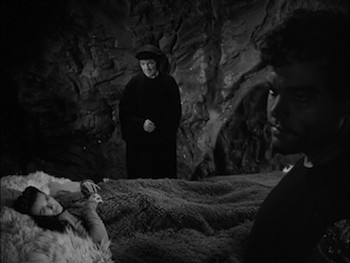 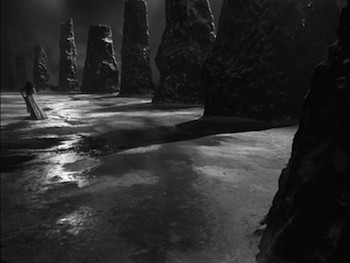