An independent, mostly Canadian production sold to 20th Century-Fox and now sublicensed to Shout! Factory (and under their Scream! Factory label), Terror Train looks quite good in high-def, a plus when one considers the movie was shot by, of all people, John Alcott (A Clockwork Orange, Barry Lyndon, The Shining). The Blu-ray, accompanied by a DVD with the same content, offers some good extras, including four interviews. 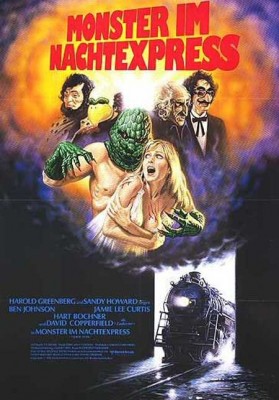 At a New Year's Eve fraternity/sorority party, nerdy pledge Kenny Hampson (Derek McKinnon) is lured into what he thinks is a ritual loss of virginity, a liaison with pert Alana Maxwell (Jamie Lee Curtis). Unbeknownst to her, however, the sadistic freshman behind the prank, "Doc" Manley (Hart Bochner, son of actor Lloyd), a pre-med student, substitutes a dummy placed in Alana's bed with an actual corpse. Kenny is so horrified that he goes mad.

Three years later Doc is now a senior and engineers his greatest triumph, a big costume party aboard an old, Art Deco train (powered by a steam locomotive), that he has hired for the evening. Also aboard are Alana; her boyfriend, Mo (Timothy Webber, who resembles Bill Maher); Doc's girlfriend and Alana's best friend, Mitchy (Sandee Currie); and Carne (Ben Johnson), the train's folksy conductor.

Just before boarding, class clown Ed (Howard Busgang), wearing a Groucho costume and mask (that doesn't really resemble the Marx brother at all), is stabbed by an unseen assailant, presumably Kenny looking for revenge. Once the train is underway Ken (David Copperfield), an accomplished magician Doc can't remember hiring, begins wowing the college kids with his close-up magic and other elaborate illusions.

Though undeniably patterned after Halloween, Terror Train aims fairly high despite a modest (reportedly CAD $3.5-$4 million) budget. The train setting is as novel as train travel had itself become by 1980, though the earlier, somewhat similar Horror Express (1972) generates more suspense with its superior script and even smaller budget. Still, the Art Deco train interiors, chiefly the work of production designer Glenn Bydwell, and Alcott's lighting and cinematography make Terror Train distinctive in its own modest way.

Folksinger/songwriter T.Y. Drake's screenplay admirably tosses in a few red herrings and keeps the audience guessing. There's a twist I won't give away except to say the fact that it partly succeeds is a testament to Alcott's talent as a lighting cameraman and a credit to actor Derek McKinnon, who dons 11 disguises during the course of the picture's 97 minutes.

It also helps that editor-turned-director Roger Spottiswoode, who'd cut films for Sam Peckinpah and later would helm big budget pictures like Tomorrow Never Dies (1997), as well as co-write the hit comedy 48 Hrs. (1982) was selected for a film with as many technical challenges as this one. Most of the picture was shot aboard a real train imported into Montreal from New England. The train was not actually moving when the interiors were being filmed, though the cars were rocked by crewmembers, creating a believable illusion of motion.

Top-billed Ben Johnson, the iconic Western character actor who'd won an Oscar for his performance in The Last Picture Show, is not exactly everyone's idea of a horror star, but he's quite good in the part, and second-billed Jamie Lee Curtis clearly knows her way around this sort of thing even though she was just 21 at the time. Copperfield was apparently well liked by the crew and is credited with the on-camera illusions.

Terror Train's title elements are more than a little rough but the rest of the film looks just fine. The dark image, dominated by blacks and reds probably looked terrible on VHS but is solid and reasonably impressive in high-def. Though clearly shot quickly on a tight shooting schedule - don't expect this to resemble Alcott's films for Stanley Kubrick - by slasher movie standards Terror Train is visually much more interesting than most such films. The monophonic production is remixed for 2.0 DTS-HD Master Audio that sounds okay. English subtitles aren't listed on the packaging but are included as an option. The disc is region A encoded, while the DVD version is Region 1.

Supplements include four interviews, with producer Daniel Grodnik, production designer Glenn Bydwell, production executive Don Carmody, and composer John Mills-Cockell. They all have interesting if slightly repetitive things to say about the picture, though a single featurette cutting between them would probably have played better. Also included is a trailer and TV spot, in high-def like the interviews, and a still gallery.

While far from being a classic of its genre, Terror Train is a decent enough Halloween knock-off that's hard to completely dislike. There's a lot of talent behind it, and they succeed in raising it several notches above the usual unambitious slasher film. For this time of year especially, Terror Train is Recommended.