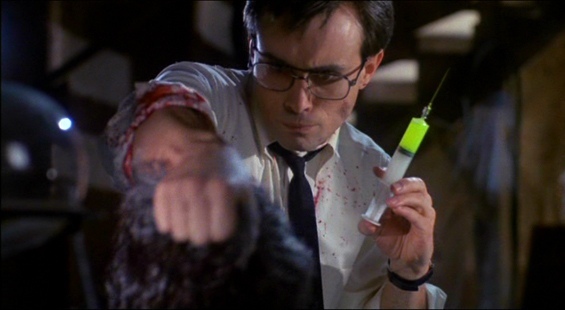 Disgusting and hilarious, Stuart Gordon's very loose adaptation of HP Lovecraft's Frankenstein rip-off, "Herbert West - Reanimator" (Lovecraft was ashamed of the story, having written it solely for the money), is a low-budget favorite of horror aficionados - and understandably so. Gordon and company fashioned a collection of gore effects that are admirable given the film's $900,000 budget. Cleverly shot and anchored by the inimitably creepy performance of Jeffrey Combs as West, Re-Animator is still effective, funny, and entertaining, partly because it doesn't aspire to qualities beyond those.

The film opens with a scene at a Zurich university, where Herbert West has just revived his dead professor, Hans Gruber (a name that fans of Die Hard, which was released three years after Re-Animator, will immediately recognize), with a mysterious serum. West re-locates to New England's Miskatonic University, where he lets a room from star medical student Dan Cain (Bruce Abbott). Little does Abbott know that West intends to use his basement as a laboratory to continue experiments with his death-reversing serum. One dead cat, one resurrected dean, and one decapitated doctor later, and West is well on his way to the assured self-destruction that seems clear from the film's outset.

Combs made his name as West, and it's always struck me as unfortunate that his tightly-wound madness wasn't better used by other directors (one key exception: Peter Jackson, who cast him very well as the Hitler-haired Agent Dammers in The Frighteners). The other actors are also well cast, including David Gale as the evil Dr. Hill, he of the head in the pan. Gordon's direction is concise without skimping on effective camera movements and attention to continuity.

The movie's finale, which takes place in a morgue, is incredibly indulgent in a variety of make-up effects, but it's always oddly refreshing to look back at a movie like Re-Animator that uses practical effects with such an obvious love of craft. A bone saw punches through the torso of a living corpse; a severed head performs cunnilingus on scream queen Barbara Crampton; a group of nude zombies revived by West's serum are dispatched in a variety of creatively gory ways. It's all dashed off with quite a bit of humor, however, and if the movie weren't so tongue-in-cheek, it would be far more repulsive and far less enjoyable. Richard Band's score keeps the tone light enough so that we don't throw up, despite the fact that he openly cribs from Bernard Herrmann's highly recognizable music for Psycho.

Image and Sound
This release from Image Entertainment presents a pretty clean but unrestored 1.78:1 transfer. It would appear to be sourced from the same master used for their previous "Millenium Edition" DVD of this title, released in 2002. The film reflects both its age and its low-budget roots: colors are drab, edges are soft, and there's a lot of grain. I can't say it's a bad transfer at all; it's just that it hasn't been given any assistance in terms of restoration. The 5.1 DTS-HD MA soundtrack is spacious and atmospheric, but when you get down to it, it's just marginally spruced-up 2.0.

Bonus Content
Although there is nothing new here, Image has ported over the considerable extras from their earlier DVD of this title.

Re-Animator holds up well after nearly thirty years. Frightening, gross, and quite funny, it remains an ideal midnight movie, with a standout performance by Jeffrey Combs. Although the technical side of the Blu-ray is not spectacular, the library of special features (though not new) may be a big selling point for fans. Recommended.