Forgiveness of Blood: The Criterion Collection, The 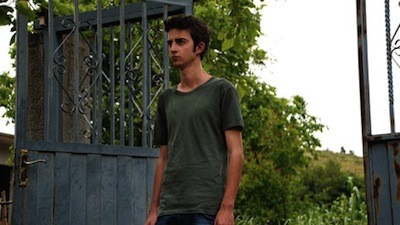 It starts with a simple act.

A father and a son are on their delivery route, selling bread out of the back of their rickety, horse-drawn cart. To get off a back road and onto the main one, they climb out of the cart and move a row of rocks to clear the way. It's not an act the man who owns the land the trail runs across takes kindly too. His soil, his rocks, his right. However, the land actually once belonged to the deliveryman's family. Mark (Refet Abazi) believes that if he no longer has an inalienable privilege to travel what was once his grandfather's estate, taken away from him in some kind of labor dispute that resulted in the redistribution of the property, then the new owner, Sokol (Veton Osmani), can at least honor his family's tradition and let the village use the shortcut. They have words, and words lead to violence. Sokol is dead, and Mark is on the run.

A simple act in the first scene leads to murder only a few minutes later. This is how Joshua Marston kicks off The Forgiveness of Blood, an Albanian family drama rooted in tradition and universal emotion. This is Marston's second feature, following his lauded 2004 debut, Maria Full of Grace. The American director co-wrote the script with Andamion Murataj, a native of Albania (and a cinematographer normally), creating an authentic story showing the dangerous influence of ancient law on modern culture.

The people in the area where The Forgiveness of Blood is set live by an old system called Kanun. Once blood is shed, Kanun dictates that it must be answered in kind. The feud between the two families will not end until both sides are satisfied that they have exacted enough pain on their enemies. Mark goes into hiding, leaving his family to fend for itself. According to the law, the women of the clan are to be left alone, and the sons will be safe as long as they stay under house arrest. Both the teenager Nik (Tristan Halilaj) and his elementary school-aged brother Dren (Elsajed Tallalli) are forbidden to go outside, or they will likely be killed, the ultimate payback for what Mark has done. Their mother can still work, and their adolescent sister, Rudina (Sindi Lacej), is forced to take over her father's delivery route. There is no other way for them to make money. 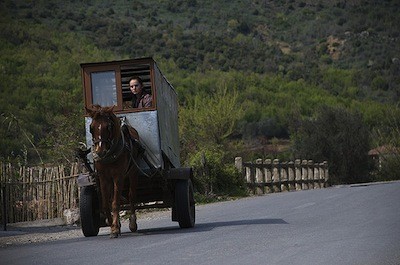 The primary narrative of The Forgiveness of Blood follows Nik and Rudina as they cope with the absurd situation that has been forced on them. They are regular 21st-century teenagers, with cell phones and ambitions of their own. Nik likes girls and he dreams of opening his own shop, presumably an internet café of some kind. Boredom overtakes him when he's in lockdown, and his restlessness develops into a kind of neuroses. He grows more irresponsible the more Rudina starts taking charge. Other men are competing with her to sell bread to her clients, and so she starts trafficking in cigarettes. The imbalance that says she is off limits is tested by friend and foe alike. Nik still expects her to clean house and make dinner; one of Sokol's cousins breaks the rules by threatening the girl when she's on the job. This leads to both children wanting to come to some kind of mediation with the other family, something that can only happen if their father either goes to jail or gets killed.

The true conflict of The Forgiveness of Blood is not the warring clans, but a battle within the generation gap, with additional touches of the culture clash resulting from the introduction of technology into a rural area. Mobile phones and first-person shooter video games look like anachronisms, like the film crew wasn't paying enough attention to the background details in their backwoods period picture. Though Nik can be pouty and selfish, it's hard not to identify with the unfairness of the situation. His entire life comes to a screeching halt, and any attempts he makes to become a part of the process of fixing it are rebuffed by the religious and tribal elders. Any American who grew up in a Christian household and argued with parents over rules imposed by the Bible can relate to Nik's frustration at being beholden to Kanun. This set of standards doesn't reflect his chosen morality, and as long as he is forced to stick by them, he can't come into his own. He sees a world that is changing faster than his neighbors are ready to contend with.

The juxtaposition this creates with Rudina makes for some splendid commentary. Her plight is the opposite: she is being forced to grow up too fast, and so she is getting into things she shouldn't. There is one tension-filled scene where she goes to the neighboring city to try to buy contraband cigarettes, despite having no real idea what she is doing. The image of her driving her horse and buggy across a bridge while cars and trucks get jammed up behind her makes for a powerful illustration of just how off the map her upbringing has been. Marston has to do very little to fill us with fear, watching this innocent willingly jump into a dangerous situation. 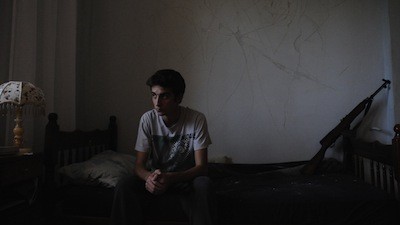 But anyone who saw Maria Full of Grace knows that Marston's talent is in making a whole lot out of very little. His is a cinema of the observed, of individual moments driven by small gestures. The most poignant elements of The Forgiveness of Blood grow from behavior and action rather than dialogue or contrivance. Nik's obsession with the cracks in his bedroom wall needs no further explanation, and so it's fitting that when Rudina demands to know why he has made them worse, he says nothing. Both of these young actors are exceptional finds. Marston guides them properly, and they appear unmannered and ordinary on screen. These are just a couple of kids, they just happen to be here. The filming style, which largely uses natural light to achieve an almost painterly visual aesthetic, leans toward off-the-cuff, probing shots more akin to documentary than indie melodrama. I wouldn't quite call it mumblecore, it's more planned than that. Marston keeps The Forgiveness of Blood in the moment without ever forgetting it's an actual film. His storytelling could easily be compared to the Dardennes, as well as much of what is currently coming out of South America (such as is rounded up here in Christopher McQuain's review of The Milk of Sorrow).

The best fictions take us from a life we know and plops us down in another, allowing us to experience the unfamiliar and find elements we recognize within it. While I know little of Albania, much less what it would be like to grow up there, The Forgiveness of Blood delivers a story that anyone should be able to find identifiable elements within. Joshua Marston is an empathetic author, one who engenders empathy from his audience. In both of his films, he avoids judging the events, and instead just relates them so that, in turn, we can relate to them. 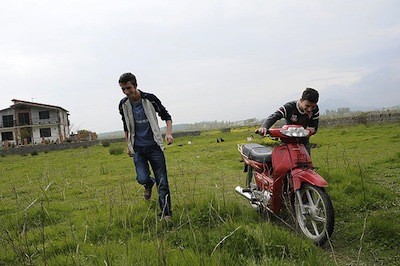 Video:
Criterion debuts The Forgiveness of Blood on home video with a full 1080p high-definition transfer, presented in 1.85:1 widescreen. The image quality is exceptional, with sharp rendering of detail and vividly realized colors. Director of photography Rob Hardy oversaw the transfer, and his stark, realistic cinematography is preserved properly. Skin tones and textiles show natural textures, and light and shadow play nicely together for a visual style that nestles comfortably between arthouse and documentary.

Sound:
The 5.1 DTS-HD Master Audio mix, presented in Albanian with optional English subtitles, has a carefully orchestrated ambience, using all the speakers to replicate the natural sound effects and create a true sense of space. Music is used sparingly, but effectively, creeping into the mix where required, and leaving as unobtrusively. Dialogue gets the right kind of heft, and the whole soundtrack comes across as smart and authentic.

Extras:
The Forgiveness of Blood is packaged in a standard, clear-plastic Blu-Ray case with the expected booklet from Criterion, featuring photos, credits, and liner notes by writer Oscar Moralde.

Joshua Marston has recorded a full-length commentary for the movie, which proves to be as thoughtful and well considered as the movie itself.

Two behind-the-scenes featurettes give us a glimpse at the production. "Acting Close to Home" shows Marston sitting down with his three lead actors--father, son, and daughter--and discussing craft. The youngsters in particular are first-timers, and so they have an interesting perspective on the experience of making a movie. There is also talk of the influence of real-life events on the script and the truth about blood feuds in Albania. "Truth on the Ground" is a more standard on-set documentary, with producer Paul Mezey hosting. More interviews with Marston and the actors round this out. Again, this gives some insight on what it was like to film in an uncommon locale.

Audition and rehearsal footage shows us the interviews that lead to the hiring of Halilaj and Lacej, alongside two clips of Marston rehearsing his cast. There is also a theatrical trailer.

FINAL THOUGHTS:
Highly Recommended. It's too bad that Joshua Marston has so far only made two movies in seven years, because both of his feature-length efforts have been excellent. The Forgiveness of Blood continues with the same unassuming aesthetic that made Maria Full of Grace such a strong debut, letting character stand large over plot, working in a modern Neorealist style to shed light on stories that convey authentic human drama. Set in Albania, The Forgiveness of Blood is a tale of how one family is torn apart by ancient laws that demand that skirmishes between clans be settled in violence. In particular, it shows two teenagers who are trying to cope even though they know the rest of the world has changed beyond this outdated code of ethics. Told in a simple, yet artful manner, The Forgiveness of Blood is a potent piece of cinema. 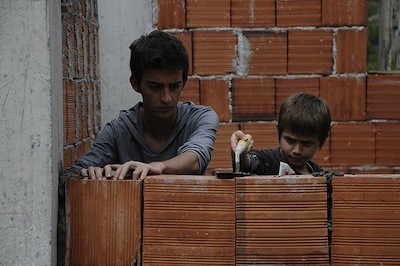